2021 Starred Reviews Round-Up – MacKids School & Library. Yes & No by Elisha CooperOn Sale Now From Caldecott Honor author/illustrator Elisha Cooper comes Yes & No, a timeless tale of friendship, adjusting your perspective, and the joys (and trials) of siblinghood. ★ “The story itself is simple and sweet in nature as we see the two main characters go from mildly interacting to fused together in their walk outside… A spare and wonderful addition to picture book collections.” 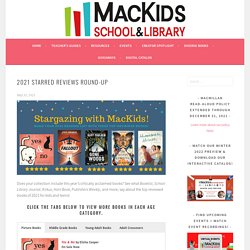 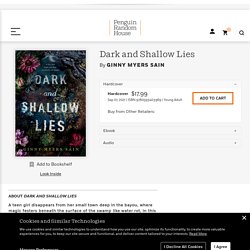 Taut pacing builds sustained terror on the page with each successive suspect in this formidable debut.” —Publishers Weekly, starred review. The Last True Poets of the Sea by Julia Drake. : The Inheritance Games (9780759555402): Barnes, Jennifer Lynn: Books. The Sky Above Us by Natalie Lund: 9780525518037. “A compelling, well-voiced look at how teenagers deal with tragedy.” — School Library JournalFrom the author of We Speak in Storms comes a twisty, psychological thriller about three friends searching for the truth in the aftermath of a plane crash. 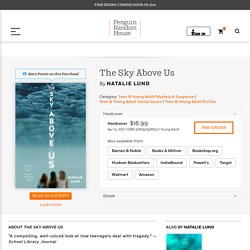 The morning after their senior year beach party, Izzy, Cass, and Janie are woken by a thundering overhead. Then they and their classmates watch in shock as a plane crashes into the water. When the passengers are finally recovered, they are identified as Izzy’s twin brother, Israel, Cass’s ex-boyfriend, Shane, and Janie’s best friend, Nate. But Izzy can feel when her brother is in pain, and she knows he’s not really dead. Dark and Shallow Lies by Ginny Myers Sain: 9780593403969. : Gilded (9781250618849): Meyer, Marissa: Books. : The Ones We're Meant to Find (9781250258564): He, Joan: Books. 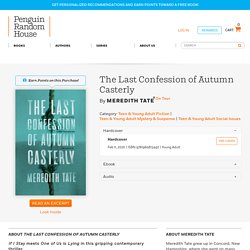 When band-geek Ivy and her friends get together, things start with a rousing board game and end with arguments about Star Wars. Her older sister Autumn is a different story. Enigmatic, aloof, and tough as nails, Autumn hasn’t had real friends–or trusted anyone–in years. Even Ivy. But Autumn might not be tough enough. Your Most Urgent Read of 2020 - lmellen - Easton Redding Region 9 Public Schools Mail. The Rise and Fall of Charles Lindbergh (9780525646549): Candace Fleming: Books. The 10 best YA books of the year (and the decade) The Best YA of 2019 EW books editor David Canfield and romance-YA columnist Maureen Lee Lenker break down their 10 favorite teen tales of the year. 10. 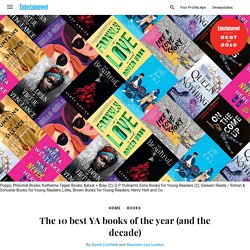 Amelia Westlake Was Never Here by Erin Gough: Erin Gough gifts readers a social justice adventure with heart and humor in equal measure. Teacher’s pet Harriet Price and anti-establishment artist Will Everhart team up to create the fictional Amelia Westlake, a high school hoax who speaks truth to power. In a time where hope can feel in short supply, it’s a breath of fresh air to get a tale that examines privilege and how to foment meaningful change without ever losing sight of its own charms. 9. 13 Books for Tweens. Middle Grade Is too Young, YA too Old. Where Are the Just-Right Books for Tweens? They Went Left by Monica Hesse. BY Monica hesse Germany, 1945. 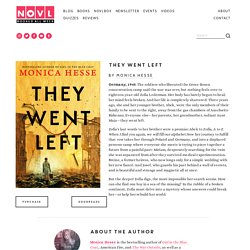 The soldiers who liberated the Gross-Rosen concentration camp said the war was over, but nothing feels over to eighteen-year-old Zofia Lederman. Her body has barely begun to heal; her mind feels broken. Look Both Ways eBook by Jason Reynolds, Alexander Nabaum. Water Booger Bears WATER BOOGER BEARS THIS STORY was going to begin like all the best stories. 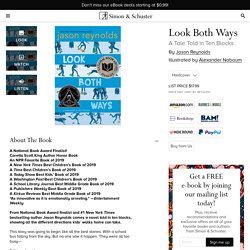 With a school bus falling from the sky. But no one saw it happen. No one heard anything. So instead, this story will begin like all the… good ones. With boogers. THE GRACE YEAR by Kim Liggett. A rebellious 16-year-old is sent to an isolated island for her grace year, when she must release her seductive, poisonous magic into the wild before taking her proper place as a wife and child bearer. 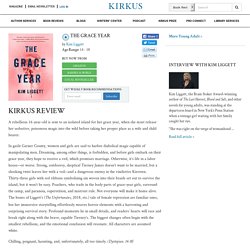 In gaslit Garner County, women and girls are said to harbor diabolical magic capable of manipulating men. Dreaming, among other things, is forbidden, and before girls embark on their grace year, they hope to receive a veil, which promises marriage. Otherwise, it’s life in a labor house—or worse. Strong, outdoorsy, skeptical Tierney James doesn’t want to be married, but a shocking twist leaves her with a veil—and a dangerous enemy in the vindictive Kiersten. The Grace Year (9781250145444): Kim Liggett: Books. 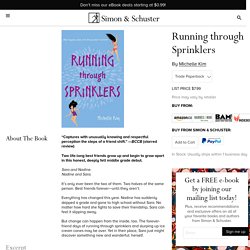 She puts her hand through its handle and swings it open to cool her body down. Plants her right foot on the floor, pulling her left leg behind her, her toes a perfect point. Dig by A.S. King. “A.S. 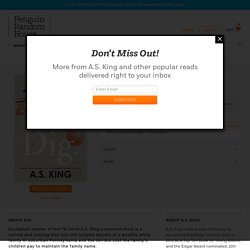 King challenges readers from the first page to the last. Dig will make you question the confines of your comfort zone—if you have one. An incredible addition to an already impressive body of work. “—Erin Entrada Kelly, New York Times bestselling author and Newbery medalist ★”[King’s] trademark surrealism and trenchant prose will speak profoundly to a generation of young people who are waking up to the societal sins of the past and working toward a more equitable future.”

The Last Voyage of Poe Blythe by Ally Condie. Eye-opening history. Amazon. Amazon. Readbrightly. Edelweiss+ S. A. Bodeen delivers yet another breathtaking YA thriller, this time set in space, where two teens fight their feelings for each other even as they try to save everyone back on their home ship. Nothing is as it seems. Best Young Adult Books of 2018.

Amy Brashear's playlist of '80s teen nostaligia - Author Amy Brashear (No Saints in Kansas) has penned a hilarious, cinematic and off-the-wall story of a small town’s (fake) nuclear demise with her latest YA historical novel, The Incredible True Story of the Making of the Eve of Destruction. There isn’t much to do in Griffin Flats, Arkansas in 1984, and misfit teen Laura is painfully aware of that fact. The only thing that cuts through the boredom is the omnipresent threat of a Soviet bombing of the town's nuclear missile silos and the Mutually Assured Destruction that would follow. But when a Hollywood big shot chooses Griffin Flats as the shooting location for his upcoming nuclear holocaust movie, The Eve of Destruction, the whole town is turned upside down. Killing the SS. Leigh Bardugo. Face your demons...or feed them.

Ember Guide Online 6D45. NPR Choice page. Best Books 2018. 2018 YALSA Teen Top 10. The Last Wish of Sasha Cade. Written by Cheyanne Young How far would you go for your best friend? The day Raquel has been dreading for months has finally arrived. Sasha, her best friend in the whole world, has died of cancer. DRY by Neal Shusterman , Jarrod Shusterman. Swing -Kwame Alexander. Shadow of the Fox-Julie Kawaga. Dry-Neal Schusterman. The Dark Beneath the Ice by Amelinda Bérubé. The Dark Deep- Allie Condie. BLACK WINGS BEATING by Alex London.

The Most Anticipated Children's and YA Books of Fall 2018. Drawn from PW’s Fall Children’s Announcements Issue, here are our editors’ selections for 21 children’s and young adult books that can’t arrive soon enough. And check out our picks for this season’s most anticipated adult books as well. Picture Books Carmela Full of Wishes by Matt de la Peña, illus. by Christian Robinson (Putnam, Oct.) - From the award-winning team behind Last Stop on Market Street, a story about a birthday girl on a walk with her big brother, the puffy dandelion she finds along the way, and the series of wishes she considers, all told against the backdrop of the family’s Spanish-speaking community. Dreamers by Yuyi Morales (Holiday House/Porter, Sept.) - In this exceedingly timely book, Caldecott Honor artist Morales (Viva Frida) traces the journey that she and her young son took when they immigrated from Mexico to the United States, and the succor that books and libraries offered as the two made their way in a new place.

Life Inside My Mind Stupid Monsters and Child Surgeons. Penguinrandomhouse. The Miscalculations of Lightning Girl by Stacy McAnulty. Two Titles nominated for the Teens’ Top Ten! #yalsaTTT - Harlequin for Libraries. Tune in to These 7 YA Lit Podcasts. New Novel Coming from 'Book Thief' Author Markus Zusak. Random House has announced the publication of Bridge of Clay, a highly anticipated YA novel by Markus Zusak, the internationally bestselling and award-winning Australian author of The Book Thief (Knopf, 2006).

Wednesday Books. The Red Bandanna by Tom Rinaldi. The Girl with the Red Balloon - Albert Whitman & Company. Ten Titles Make the 2017 National Book Award Longlist for Young People’s Literature. 11 Excellent Books in the Brand-New Kirkus Collections (pg. 10) Fierce Reads. WHEN I AM THROUGH WITH YOU by Stephanie Kuehn.