Websites to Check Out. How to See Everything You've Ever Purchased on iTunes. Advertisement Most iOS apps can be purchased within the price of a coffee. 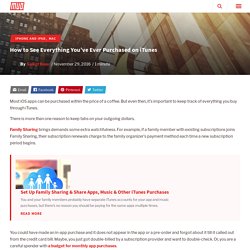 But even then, it’s important to keep track of everything you buy through iTunes. There is more than one reason to keep tabs on your outgoing dollars. Family Sharing brings demands some extra watchfulness. For example, if a family member with existing subscriptions joins Family Sharing, their subscription renewals charge to the family organizer’s payment method each time a new subscription period begins.

We notice you're using an adblocker. Not now. How to Organize Your Password Manager in 7 Steps. After using LastPass for over six years, I recently decided to move to 1Password. 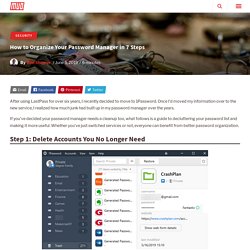 Once I’d moved my information over to the new service, I realized how much junk had built up in my password manager over the years. If you’ve decided your password manager needs a cleanup too, what follows is a guide to decluttering your password list and making it more useful. Whether you’ve just switched services or not, everyone can benefit from better password organization. Once you get into the habit of storing every new login in your password manager, it won’t be long before your vault brims over. Logins you used one time to access something in college, duplicates, and websites that no longer exist all waste space and make legitimate passwords harder to find.

Walk through your password manager and trash anything that you’re sure you won’t need again. Note that you should be careful about duplicate sites. Best Books Summer 2019 from Publishers Weekly. Aurora Rising Amie Kaufman and Jay Kristoff (Knopf Books for Young Readers) My favorite reads from last year were the bestselling Illuminae series, which Kaufman and Kristoff cowrote. 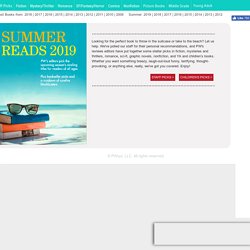 When I learned that they were collaborating on a new trilogy, well, I don’t think I can accurately describe my excitement. An SF YA with an ensemble cast of misfits, blistering sarcasm, and characters who are really good at what they do but terrible when interacting with other people? Sign me up, please! —Drucilla Shultz, assistant editor The October Man Ben Aaronovitch (Subterranean) It’s lucky that Aaronovitch turns out new additions in his Rivers of London supernatural police procedural series so often, since their deadpan humor and sexy river gods make them perfect diversions in any season. The latest entry is a spin-off, introducing a new protagonist, magic-practicing cop Tobias Winter, in a new setting: Germany.

Educator Innovation Station. Certified Educator. 8 Ways to Digitally Summarize the School Year. Dynamic Learning Project. Tech You Can Do: A School App You Can Do. A few months ago, I wrote about creating an "app" using Google Slides, "Your Very Own App You Can Do". 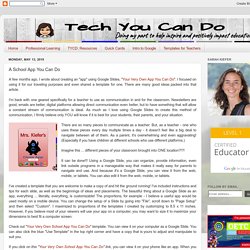 I focused on using it for our traveling purposes and even shared a template for one. There are many good ideas packed into that article. I'm back with one geared specifically for a teacher to use as communication in and for the classroom. Stock your toolbox with cutting-edge resources from TCEA. Freedom on the Move Crowdsources “Runaway Ads” for Database on Fugitives from Slavery. A team of historians, researchers, and developers have joined forces to establish Freedom on the Move (FOTM), a database focused on materials regarding fugitives from slavery in North America. 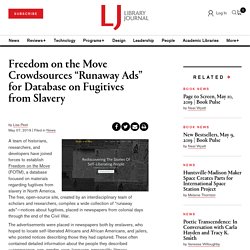 The free, open-source site, created by an interdisciplinary team of scholars and researchers, compiles a wide collection of “runaway ads”—notices about fugitives, placed in newspapers from colonial days through the end of the Civil War. The advertisements were placed in newspapers both by enslavers, who hoped to locate self-liberated Africans and African Americans, and jailers, who posted notices describing those they had captured. 5 Fun Presentation Tools for End-of-Year Projects. Help students demonstrate classroom knowledge and develop design skills. 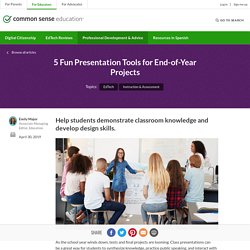 As the school year winds down, tests and final projects are looming. Class presentations can be a great way for students to synthesize knowledge, practice public speaking, and interact with their classmates. But there are also potential drawbacks: Standing up and speaking in front of peers can be nerve-racking (even for some adults!) , and the presentations themselves can become repetitive and formulaic. Multimedia tools can reduce student anxiety by encouraging a creative approach that not only builds design and tech skills but also can turn an intimidating final assignment into a fun experience. Shadow Puppet Edu Price: FreePlatforms: iPad, iPhone, iPod TouchGrades: 2–12 Using Shadow Puppet Edu, students can create video slideshows, adding their own narration and text. Screencastify Price: Free; premium version $24/yr.Platforms: WebsiteGrades: 3–12 Office Sway Adobe Spark. Edtech Coaches Network - ISTE Connect.