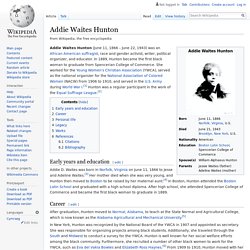 Waites was born in Norfolk, Virginia on June 11, 1866 to Jesse and Adeline Waites.[3] Her mother died when she was very young, and Hunton then moved to Boston to be raised by her maternal aunt.[4] In Boston, Hunton attended the Boston Latin School and graduated with a high school diploma. After high school, she attended Spencerian College of Commerce and became the first black woman to graduate in 1889. Career[edit] After graduation, Hunton moved to Normal, Alabama, to teach at the State Normal and Agricultural College, which is now known as the Alabama Agricultural and Mechanical University.[5] In New York, Hunton was recognized by the National Board of the YWCA in 1907 and appointed as secretary. In 1917, the U.S. entered World War I. Personal life[edit] In July 1893, she married William Alphaeus Hunton, who was working in Norfolk, Virginia to establish the Young Men's Christian Association for Negro youth. Kathryn Magnolia Johnson. Kathryn Magnolia Johnson (December 15, 1878 – November 13, 1954)[1][2] was an American political activist who began working as a teacher before becoming one of the first members of the National Association for the Advancement of Colored People.[2] After criticizing the organization's all white leadership roles, Johnson joined the Young Men's Christian Association.[3] After the organization sent Johnson to France to observe during World War I, Johnson published a book about her findings called, Two Colored Women with the American Expeditionary Forces (1920).[2] This book was written with Addie Waites Hunton.[4] The rest of Johnson's life was dedicated to spreading African American activism across the states through book selling to help in the campaign for civil rights.[5] Early life[edit] Teaching career and activism[edit] 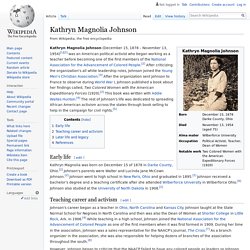 Presenting the 2019 Boston Globe–Horn Book Award winners. It's Time We Talk About Librarians and Money. What’s that thing they always say about if you do something you love you’ll never work a day in your life? 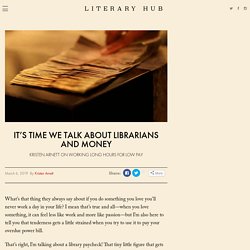 I mean that’s true and all—when you love something, it can feel less like work and more like passion—but I’m also here to tell you that tenderness gets a little strained when you try to use it to pay your overdue power bill. That’s right, I’m talking about a library paycheck! That tiny little figure that gets added to your bank account after you work a 40-hour plus work week. It’s not fun to talk about money (it’s truly a nightmare), but it’s something we all understand. We need to make a salary so we can afford to live. Like many other important professions in the learning field (hello, teachers!) Article continues after advertisement. How to Turn Your Side Hustle into Full-Time Freelancing. A steady stream of clients for your freelance business means a steady stream of income. 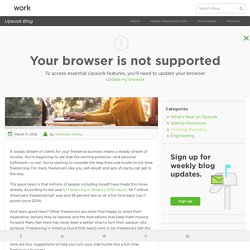 You’re beginning to see that the earning potential—and personal fulfillment—is real. You’re starting to consider the leap from side hustle to full-time freelancing. For many freelancers like you, self-doubt and lack of clarity can get in the way. The good news is that millions of people, including myself, have made this move already. According to last year’s Freelancing in America 2018 report, 56.7 million Americans freelanced last year and 28 percent did so on a full-time basis (up 11 points since 2014). 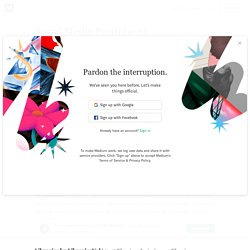 The Tweeted Times aggregates the most important news from your friends. Alternatively, you can specify the topics you care about and never miss any news on that very special and important topic.” ALSO SEE: Promote yourself on Twitter with The Tweeted Times’ new “Promote” feature: “Quite a lot of people on Twitter choose to post on their professional topics only. We have created ‘Promote’ feature for such Twitter users who build communities of interest on Twitter. Here is how it works. Find the new ‘Promote’ feature in the top right corner of any Twitter newspaper. From Scoop.it — “Scoop.it Content Curation Build your online presence by publishing great content: * Discover content instantly on the keywords of your choice. * Curate, add your perspective and publish to your own topic page. The urgency of intersectionality. 7 Online Privacy Tools You Need to Start Using. The Horror Noire Syllabus. LibrariesVal Books. Librarianship and more!