War of the words: have we stopped making sense? What is happening to the English language? 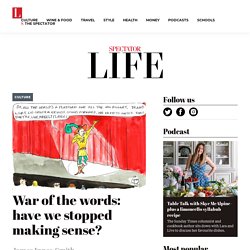 Why are we allowing our greatest gift to the world to be mangled out of all recognition? The number of boys dropping out of school or leaving without basic literacy skills is a national scandal but one that few in power dare speak about. Trevor Phillips, former chairman of the Equality and Human Rights Commission has blamed a ‘lethal cocktail of inverted snobbery, racial victimhood and liberal guilt’ for the reluctance to help educate white boys in particular, whom he describes as today’s ‘educational left-behinds’: ‘I doubt that I’ll ever work out why the British appear untroubled that so many of their children emerge from over a decade of expensive, compulsory education with scarcely more in the way of literacy and numeracy than the average Neanderthal.’

But children aren’t the only ones losing a grip on this most basic of life skills. In broader culture too, words are becoming increasingly opaque. Should schools be allowed to ban slang words like 'peng'? ‘I’m glad you reached out but I’m at capacity’: is corporate jargon ruining our friendships? They call him Mr Buy-In. 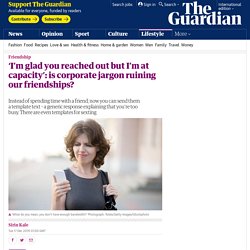 After Tessa Rowe, a recruitment worker from Bristol, went on an underwhelming second date with Aaron (not his real name) – they had been set up by friends – he walked her home and asked if she would like to meet up again. Language wars: the 19 greatest linguistic spats of all time. What is it about language that gets people so hot under the collar? 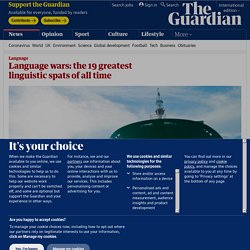 That drives them to spend hours arguing with strangers on the internet, to go around correcting misspelt signs in the dead of night, or even to threaten acts of violence? The languages we speak are central to our sense of self, so it is not surprising that their finer points can become a battleground. Love Island is a lesson in how language, like, evolves. Love Island is not for everyone. 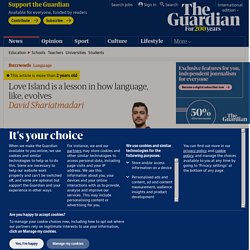 Why it’s time to stop worrying about the decline of the English language. The 21st century seems to present us with an ever-lengthening list of perils: climate crisis, financial meltdown, cyber-attacks. 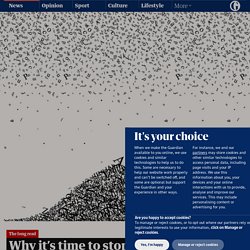 Should we stock up on canned foods in case the ATMs snap shut? Buy a shedload of bottled water? Hoard prescription medicines? The prospect of everything that makes modern life possible being taken away from us is terrifying. Love Island is a lesson in how language, like, evolves. Like it or not, they can’t stop saying it on Love Island. Sound and fury: how pronunciation provokes passionate reactions. When I used to present programmes on English usage on Radio 4, people would write in and complain about the pronunciations they didn’t like. 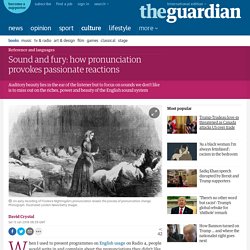 In their hundreds. (Nobody ever wrote in to praise the pronunciations they did like.) Language Grammar Rules World Without Whom Emmy Favilla. Twerking, selfie and unlike? Young people don't speak like that – I should know. Regardless, the future of the English language looks bleak. 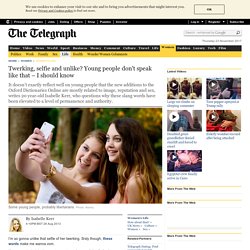 As a member of the younger generation, partly responsible for these linguistic calamities, I can only apologise. I am embarrassed and ashamed. It doesn’t exactly reflect well on young people that the new additions are mostly related to image, reputation and sex. Instead of creating words to improve our ability to communicate and express ourselves, these words simply promulgate an unhealthy culture obsessed with being seen in the right places and knowing who’s doing what. So, what's the problem with 'so'? Another day, another linguistic bugbear held up for ridicule. 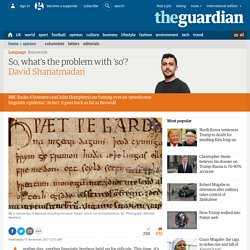 This time, it’s the harmless, modest, blink-and-you-miss-it word “so”. Is street slang affecting our children's employment prospects? - RECRUITING TIMES. It has been suggested that some people are unaware of the nuances that govern appropriate use of slang Some employers have reported receiving messages from applicants replete with slang and emojis; some have even been contacted over social media with friend requests Experts have voiced concern that the slang used by many young – and some not so young – people today is creating a negative impression that ruins their chances of getting a job. 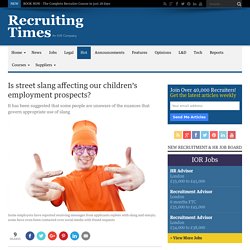 Inappropriate usage. Teens Aren't Ruining Language. Clive James: ‘The English language is under siege from tone-deaf activists’ From alright to zap: an A-Z of horrible words. The battle over the words used to describe migrants - BBC News. Images of people scrambling over barbed wire fences in Calais or crossing the Mediterranean in fishing boats have dominated the media over the last few months. 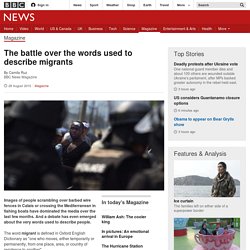 And a debate has even emerged about the very words used to describe people. The word migrant is defined in Oxford English Dictionary as "one who moves, either temporarily or permanently, from one place, area, or country of residence to another". It is used as a neutral term by many media organisations - including the BBC - but there has been criticism of that use. News website al-Jazeera has decided it will not use migrant and "will instead, where appropriate, say refugee".

The word 'rape' is becoming a joke on Twitter. Are we in danger of sanitising the crime? Twitter threats sent to Caroline Criado-Perez (Photo: PA) Last week two people pleaded guilty to sending menacing tweets to Caroline Criado-Perez. I’ve written about trolling, especially the misogynistic variety, elsewhere. When insults become the norm, dialogue is debased. Johnson: Language anxieties: A long decline. CAROLYN BOINTON: Why are we ashamed to speak English language properly?

Comments (0) This week, columnist Carolyn Bointon takes a look at the importance of speaking the English language properly. Read what she had to say here: MY daughter Jessie and I went away for a week in Cardigan Bay over half term and I couldn't help but be impressed by the obvious pride the Welsh have in their language. Everything, from menus to road signs, was written in both English and Welsh and, pretty well everywhere we went, we heard people talking in their native tongue.

It got me wondering why we, in England, don't share such an immense pride in speaking English. The weather wasn't perfect. And that's when I really started to think about how we almost seem ashamed to speak properly, to have a good grasp of the English language – and it made me wonder why. Um or er: which do you, um, use more in, er, conversation? In the historic struggle between the ummers and the errers, the ummers are getting the upper hand.

A study of speech patterns by socio-linguists at Edinburgh University has found that English speakers increasingly tend to use “um” rather than “er” as the filler of choice. Mind your language. The Plain English Campaign. Should banter be banned? The vogue for banning words. The Banned List: Top 100. 10 Things People Once Complained Would Ruin The English Language. The last taboos. Don't fear our changing language. How the English language became such a mess.