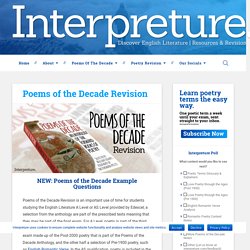 For A Level, poetry is part of the third exam and in total accounts for 30% of the qualification. One half of that exam made up of the Post-2000 poetry that is part of the Poems of the Decade Anthology, and the other half a selection of Pre-1900 poetry, such as English Romantic Verse. In the AS qualification, poetry is included in the poetry and drama exam. From the Journal of a Disappointed Man - Poem Analysis - Interpreture. ‘From the Journal of a Disappointed Man’ is a poem by Andrew Motion which considers the role of men within society, and interactions between men based on their different livelihoods and perspectives. 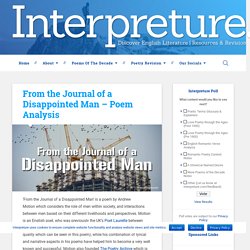 Motion is an English poet, who was previously the UK’s Poet Laurette between 1999 and 2009. He focuses on his aim to “write in clear language” (a quality which can be seen in this poem), while his combination of lyrical and narrative aspects in his poems have helped him to become a very well known and successful. Motion also founded The Poetry Archive which is an excellent resource for studying poetry. This poem is part of the set of prescribed poems that could be included in the Edexcel English Literature exam, meaning that it is important to study, understand and revise this poem.

Analysis of The Eve of St Agnes. English & Media Centre. Seamus Heaney’s family on life with the great poet: ‘He was always just Dad a... In 2011, when Seamus Heaney announced that he would donate his papers to the National Library of Ireland (NLI), it was a source of much pride, and a little relief, for the library. 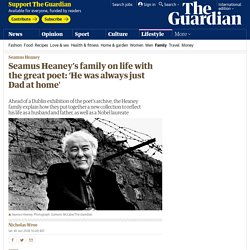 There had been some speculation that the archive would go to Harvard, where Heaney had taught for many years. CLiC Dickens - University of Birmingham. The CLiC Dickens project demonstrates through corpus stylistics how computer-assisted methods can be used to study literary texts and lead to new insights into how readers perceive fictional characters. 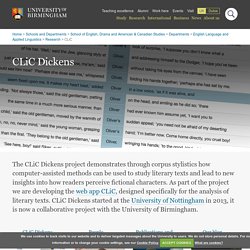 As part of the project we are developing the web app CLiC, designed specifically for the analysis of literary texts. CLiC Dickens started at the University of Nottingham in 2013, it is now a collaborative project with the University of Birmingham. For feedback and questions please contact us at clic@contacts.bham.ac.uk or via Twitter: <p>Browser does not support script. </p> Arts and Humanities Research Council grant reference AH/P504634/1. 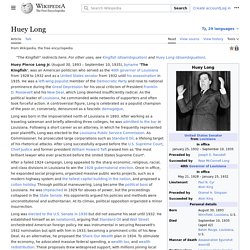 (August 30, 1893 – September 10, 1935), self-nicknamed The Kingfish, was an American politician who served as the 40th governor of Louisiana from 1928 to 1932 and as a member of the United States Senate from 1932 until his assassination in 1935. As the political leader of Louisiana, he commanded wide networks of supporters and was willing to take forceful action.

He established the long-term political prominence of the Long family. Long's Share Our Wealth plan was established on February 23, 1934 with the motto "Every Man a King". To stimulate the economy, Long advocated federal spending on public works, schools and colleges, and old age pensions. Long split with Roosevelt in June 1933 to plan his own presidential bid for 1936 in alliance with the influential Catholic priest and radio commentator Charles Coughlin. During Long's years in power, great strides were made in infrastructure, education and health care. Biography[edit] Childhood and education[edit] Oscar K. Rugged individualism. The belief that all individuals, or nearly all individuals, can succeed on their own and that government help for people should be minimal. 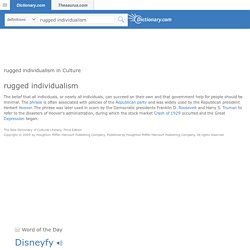 How to Write a Villanelle - Mycroft Poetry Excerpt (From "Do Not Go Gentle . ... Tennessee Williams lacked confidence, letters to friends reveal. He found fame with The Glass Menagerie and won Pulitzer prizes for his stage masterpieces, A Streetcar Named Desire and Cat on a Hot Tin Roof, but Tennessee Williams was plagued by self-doubt, previously unpublished letters reveal. 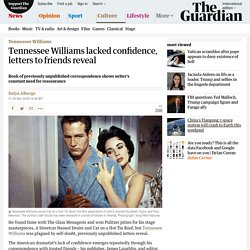 The American dramatist’s lack of confidence emerges repeatedly through his correspondence with trusted friends – his publisher, James Laughlin, and editor, Robert MacGregor – over 25 years until his death in 1983. In 1964, he wrote of his “self-contempt”, adding: “I must confess that I have doubts and fears.” In 1972, he confided: “You know how badly I need reassurance about my work.” His successes included screen adaptations of Streetcar Named Desire, starring Marlon Brando and Vivien Leigh, and Cat on a Hot Tin Roof, with Elizabeth Taylor and Paul Newman. In a poignant letter in 1960, he wrote: “I am tired of writing and writing is tired of me.”

The correspondence will be published by WW Norton & Co on 13 April. Poem of the week: Dover Beach. Dover Beach is a 'honeymoon' poem. 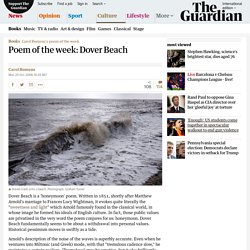 Written in 1851, shortly after Matthew Arnold's marriage to Frances Lucy Wightman, it evokes quite literally the "sweetness and light" which Arnold famously found in the classical world, in whose image he formed his ideals of English culture. In fact, those public values are privatised in the very word the poem conjures for us: honeymoon. Dover Beach fundamentally seems to be about a withdrawal into personal values. Gender, sexuality and class by David Wheatley. Study and Revise A Street Car Named Desire Streetcar sample material. 'Swarm of people': Cameron accused of 'dehumanizing' Calais migrants. Ilivehere.co.uk names Dover as 10th worst town in England. Dover has been named one of the country's worst towns to live in. 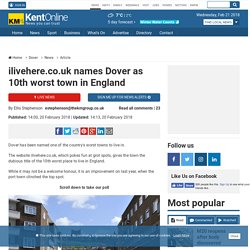 The website ilivehere.co.uk, which pokes fun at grot spots, gives the town the dubious title of the 10th worst place to live in England. While it may not be a welcome honour, it is an improvement on last year, when the port town clinched the top spot. Home. Register. Hays’d: Decoding the Classics — “A Streetcar Named Desire” The Motion Picture Production Code, also known as the Hays Code after censor/stick-in-the-mud Will Hays, regulated film content for nearly 40 years, restricting, among other things, depictions of homosexuality. 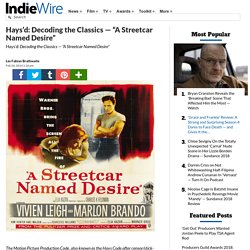 Filmmakers still managed to get around the Code, but gay characters were cloaked in innuendo, leading to some necessary decoding. Tennessee Williams’s celebrated play had a difficult road to the screen thanks to the ever watchful Hays Office and its butt buddy for life, the Catholic League of Decency. Due to the play’s references to homosexuality and rape, there were some 68 script changes from the stage to screen.

The 'masculine mystique' – why men can't ditch the baggage of being a bloke. Back in the 90s, it was all going to be so different. Not for our generation the lopsided approach of our parents, with their quaint postwar notions of father-breadwinners and mother-homemakers. We would be equal; interchangeable. Our young women would run companies, embassies, hospitals and schools, while our young men, no slouches themselves, would punctuate their careers with long, halcyon spells dandling babies and teaching toddlers how to make tiny volcanoes out of vinegar and baking soda.

MODERN TRAGEDY SUBGENRE IN "A STREETCAR NAMED DESIRE" by Shabrina Adani on Prezi. A Streetcar Named Desire: Character List. Blanche DuBois - Stella’s older sister, who was a high school English teacher in Laurel, Mississippi, until she was forced to leave her post. Blanche is a loquacious and fragile woman around the age of thirty. After losing Belle Reve, the DuBois family home, Blanche arrives in New Orleans at the Kowalski apartment and eventually reveals that she is completely destitute. Though she has strong sexual urges and has had many lovers, she puts on the airs of a woman who has never known indignity.

She avoids reality, preferring to live in her own imagination. As the play progresses, Blanche’s instability grows along with her misfortune. Streetcarnameddesire - Plastic Theatre. Intertextuality in 'Stranger Things' Tennessee Williams Wounded Genius. Symbols in a Streetcar Named Desire. In literature, symbols are widely used by authors as a means of emphasising certain atmospheres and characteristic features of people and places. A symbol is an object or image that stands for itself and also for something else. In a sense, all language is symbolic considering that letters form words which stand for, or symbolise, real things. What Is Postmodernism? Is Truth Beauty? - Philosophy Tube. The Romantics - Liberty (BBC Documentary) The Romantics - Nature (BBC documentary) The Romantics - Eternity (BBC documentary) Ode On a Grecian Urn analysis by Caroline Blair.

Poems of the Decade study list. Poems of the decade- connections - Mindmap in A Level and IB English Literature. Poems of the Decade – AS & A2 English Blog. ODE TO A GRAYSON PERRY URN. Enter emagazine online. Thug Notes - The Great Gatsby. The Handmaid's Tale = A Whack-Ass Future For Women? – Thug Notes Summary & An... Eat Me by Patience Agbabi. Chainsaw versus The Pampas Grass. A' Level English Literature: All Exam Boards. The Simpsons movie references. Rich Hall's The Dirty South. Introduction to Aristotle's System of Tragedy. "Oh, Streetcar!" from "The Simpsons" A' Level English Literature: All Exam Boards. BBC Radio 4 - In Our Time - Culture. A Level English Revision - A Streetcar Named Desire Relationships. A Level Anthology.

Denial: Not just a streetcar in New Orleans.