Dancing Around the Unspeakable at Intake – Go With That. “Have you ever been emotionally, physically, or sexually abused?” 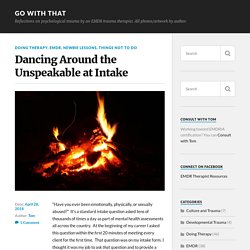 It’s a standard intake question asked tens of thousands of times a day as part of mental health assessments all across the country. At the beginning of my career I asked this question within the first 20 minutes of meeting every client for the first time. That question was on my intake form. I thought it was my job to ask that question and to provide a summary of the client’s response in the space below it. It wasn’t until a close friend and fellow intern pointed out how triggering that question can be for clients with trauma that I started to find other ways to take a trauma history. Clarify Roles and Options. Ask Polly: My In-Laws Are Careless About My Food Allergy! Photo: Yuri Figuenick/Getty Images Dear Polly, I have a very severe allergy to mushrooms. 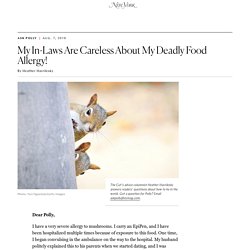 I carry an EpiPen, and I have been hospitalized multiple times because of exposure to this food. One time, I began convulsing in the ambulance on the way to the hospital. My husband politely explained this to his parents when we started dating, and I was invited to family meals. Aconsciousrethink. Before you begin reading this article, it’s worth making it very clear from the outset that what follows does not apply to all victims of narcissistic abuse. 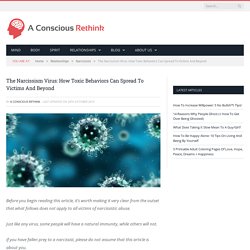 Just like any virus, some people will have a natural immunity, while others will not. If you have fallen prey to a narcissist, please do not assume that this article is about you. What’s described is merely a possibility; it is not meant to be some blanket statement about all victims. With this in mind, let’s get started… When a person experiences the destructive behavior of a narcissist, you might think that it would leave them incapable of ever inflicting the same misery on others. Yet, it is sometimes the case that a victim of abuse will eventually take on the role of the abuser. Whether they ever develop full-blown narcissistic personality disorder is a matter of debate, but it is certainly possible for them to exhibit many traits that one would associate with a narcissist. Overview of Gardner's opinions on pedophilia and child sexual abuse. 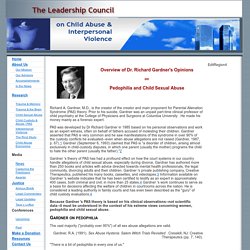 Gardner, M.D., is the creator of the creator and main proponent for Parental Alienation Syndrome (PAS) theory. Prior to his suicide, Gardner was an unpaid part-time clinical professor of child psychiatry at the College of Physicians and Surgeons at Columbia University . He made his money mainly as a forensic expert. PAS was developed by Dr Richard Gardner in 1985 based on his personal observations and work as an expert witness, often on behalf of fathers accused of molesting their children. Gardner asserted that PAS is very common and he saw manifestations of this syndrome in over 90% of the custody conflicts he evaluated--even when abuse allegations are not raised (Gardner, 1987, p. 67).1 Gardner (September 6, 1993) claimed that PAS is "a disorder of children, arising almost exclusively in child-custody disputes, in which one parent (usually the mother) programs the child to hate the other parent (usually the father).

"2 Gardner, R.A. (1991). Why Trauma Survivors Can’t Just ‘Let It Go’ 465Save It seems the deeper I journey into the healing and recovery process, the more I find that much of our cultural and conventional wisdom does not help trauma survivors. 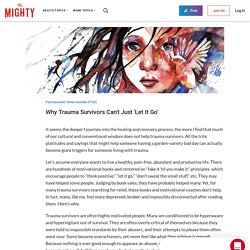 All the trite platitudes and sayings that might help someone having a garden-variety bad day can actually become giant triggers for someone living with trauma. Let’s assume everyone wants to live a healthy, pain-free, abundant and productive life. There are hundreds of motivational books and centered on “fake it ’til you make it” principles, which encourage people to “think positive,” “let it go,” “don’t sweat the small stuff,” etc. They may have helped some people. Trauma survivors are often highly motivated people. To a survivor, telling them to “think positive” sounds cruel. “Positive thinking” shields the reality that sometimes people feel shitty. 4 Cognitive Distortions Caused By Childhood Emotional Neglect – Fighting for a Future. By Jonice Webb Cassie sits with her two friends at their favorite coffee shop. 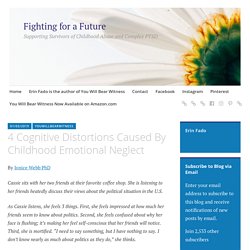 She is listening to her friends heatedly discuss their views about the political situation in the U.S. As Cassie listens, she feels 3 things. First, she feels impressed at how much her friends seem to know about politics. Second, she feels confused about why her face is flushing; it’s making her feel self-conscious that her friends will notice. Over the last 5 years, between my psychology practice, my blogs, and my online program, I have interacted with thousands of folks who grew up with Childhood Emotional Neglect, or CEN. Childhood Emotional Neglect or CEN happens when your parents fail to notice or respond enough to your feelings as they raise you. When you grow up with your emotions unacknowledged, or even discouraged in your childhood home, you learn to think in some ways that can hold you back and hurt you throughout your adult life. .

#1 Other people’s needs matter more than mine. Source: PsychCentral.