U.S.: real GDP growth by quarter 2011-2019. Basic Account Get to know the platform You only have access to basic statistics. 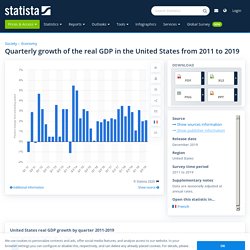 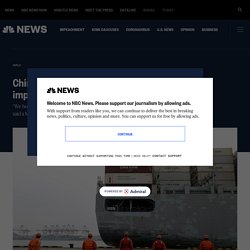 The cuts follow last month's signing of a “Phase 1” agreement toward ending a long-running tariff war over Beijing's technology ambitions and trade surplus. Both sides have made conciliatory gestures but the lingering dispute threatens to chill global economic growth. Trump dubbed winner over Fed on rates by global chief investment officer. Trump Trade War Works as US Economy Sizzles & China Sees Weakest Growth in 29 Years. Desperate Democrats badmouth economy even as it booms. Here’s A Look At One Ohio Town Where The Manufacturing Jobs Are Coming Back. Stock markets ending the year on record highs is great for everyone, not just investors. The first and greatest lesson of economics is that incentives matter — thus, it is useful and important that the stock markets are set to end the year at or near all-time highs. 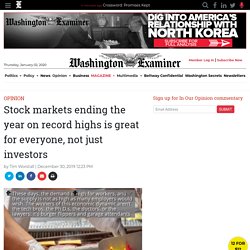 Of course, our indices like the Dow Jones and S&P 500 don't account for inflation, so they need to end every year a little bit higher just to stand still. But the stock market hitting record highs is useful evidence that we're getting something about the economy correct. Fed study: Trump tariffs backfired, caused job losses and higher prices. Wages for Rank-and-File Employees Rising at Their Fastest Rate in a Decade. A new report from the Wall Street Journal confirms wages for rank-and-file workers are rising at the quickest pace in more than a decade, even faster than for bosses, a sign that the labor market has tightened sufficiently to convey bigger increases to lower-paid employees. 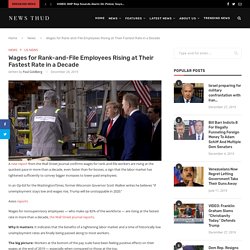 In an Op-Ed for the WashingtonTimes, former Wisconsin Governor Scott Walker writes he believes “if unemployment stays low and wages rise, Trump will be unstoppable in 2020.” Axios reports Wages for nonsupervisory employees — who make up 82% of the workforce — are rising at the fastest rate in more than a decade, the Wall Street Journal reports. Why it matters: It indicates that the benefits of a tightening labor market and a time of historically low unemployment rates are finally being passed along to most workers. Ford Motor Co. Announces Plans To Add 3,000 US Jobs And Invest $1.45 Billion To Build New Vehicles. DETROIT (AP) — Ford Motor Co. is adding 3,000 jobs at two factories in the Detroit area and investing $1.45 billion to build new pickup trucks, SUVs, and electric and autonomous vehicles. 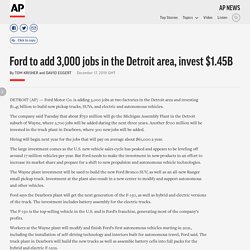 The company said Tuesday that about $750 million will go the Michigan Assembly Plant in the Detroit suburb of Wayne, where 2,700 jobs will be added during the next three years. Another $700 million will be invested in the truck plant in Dearborn, where 300 new jobs will be added. Hiring will begin next year for the jobs that will pay on average about $61,000 a year. The large investment comes as the U.S. new vehicle sales cycle has peaked and appears to be leveling off around 17 million vehicles per year. But Ford needs to make the investment in new products in an effort to increase its market share and prepare for a shift to new propulsion and autonomous vehicle technologies. Wage Gains: Blue-Collars Beat White-Collars in Donald Trump's Economy.

Wages for blue-collar Americans are rising by 4.3 percent in 2019 — or 2.7 percent after inflation — in President Donald Trump’s tightening labor market, according to Goldman Sachs. 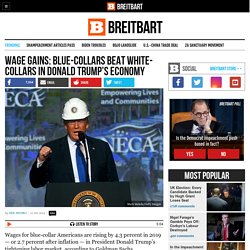 In contrast, white-collar salaries are rising at a much slower rate amid the bipartisan policy of inviting roughly 1.5 million foreign graduates to take the jobs needed by U.S. graduates. The 4.3 percent estimate is part of a December 9 report by Goldman Sachs’ chief economist Jan Hatzius, who wrote: It is a myth that the labor market tightening over the past several years has failed to translate into stronger wage growth. AOC Lies About New Trump Welfare Rule & Children, Gets 40,000 Retweets. CNBC’s Jim Cramer “Whether You Like Or Hate Trump, These Are Best Economic Numbers of Our Lives” BREAKING: U.S. Posts First Month as a Net Petroleum Exporter Since 1949. Soaring output from shale deposits in West Texas and New Mexico have pushed the United States into becoming a net Petroleum exporter for the first time since 1949. 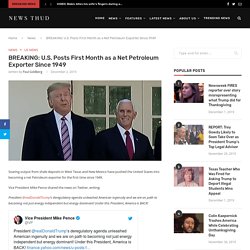 Vice President Mike Pence shared the news on Twitter, writing: President @realDonaldTrump’s deregulatory agenda unleashed American ingenuity and we are on path to becoming not just energy independent but energy dominant! Under this President, America is BACK! Bloomberg reports the U.S. solidified its status as an energy producer by posting the first full month as a net exporter of crude and petroleum products since government records began in 1949. Carney: Fed Economists Finally Admit Tariffs May Not Squeeze U.S. Consumers. It is not yet a victory over China. 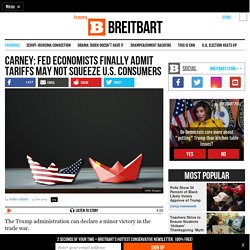 It’s a victory over the Federal Reserve. A trio of economists from the Federal Reserve Bank of New York have posted an article on the bank’s blog, Liberty Street Economics, that challenges the claim that U.S. households are paying for tariffs on Chinese imports. Five months ago, Liberty Street Economics wrote about a controversial study that claimed to show the tariffs were costing American households hundreds of dollars a year in the form of higher prices for imported goods. October job growth soars past Wall Street's expectations, brushing off GM strike. FOX Business’ Edward Lawrence breaks down the October jobs report. 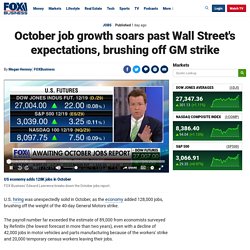 U.S. hiring was unexpectedly solid in October, as the economy added 128,000 jobs, brushing off the weight of the 40-day General Motors strike. The payroll number far exceeded the estimate of 89,000 from economists surveyed by Refinitiv (the lowest forecast in more than two years), even with a decline of 42,000 jobs in motor vehicles and parts manufacturing because of the workers' strike and 20,000 temporary census workers leaving their jobs. The unemployment rate edged slightly higher to 3.6 percent as more people were looking for work, but continued to hover near a 50-year low. The labor force participation rate was little changed at 63.3 percent. Average hourly earnings, meanwhile, rose by 3 percent over the past year to $28.18. 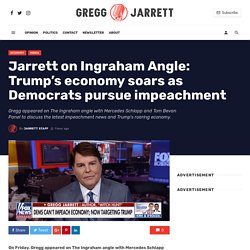 Watch below: The stock market surged Friday after an October jobs report posted better-than-expected private payroll growth; sending the Dow Jones average up 250-points and the S&P 500 setting a new record. Advertisement “The Dow Jones Industrial Average traded 250 points higher, or 0.9%. WOMPITY womp womp! Byron York has more bad news for Democrats and the Resistance (but great news for America!) If you want to know the real reason why Democrats are trying SO hard to impeach a legally elected president look no further than how well the country is doing under Trump. To put it bluntly, they know they can’t beat him on logistics and reality alone because their policies and ideas just suck that much. Truth hurts. Bad news for Democrats, GREAT NEWS for America! Black Unemployment Just Dropped to Lowest Ever Level. America Added 128,000 Jobs in October, Unemployment at 3.6%

The U.S. economy added 128,000 jobs for the month and the unemployment rate rose to 3.6 percent, higher than the month before but still near a 50-year low. Black Unemployment Drops to Lowest Level Ever. Energy giant Encana to move HQ from Calgary to the U.S. Encana Corp., one of Canada's oldest and largest energy companies, is moving its corporate headquarters from Calgary to the United States. GDP Growth Beats Economists' Expectations for Third Quarter. Leading 2020 Democrats Have A Plan To Wreck The Housing Market Again. Democratic presidential candidates are hustling massive new programs to close the “racial homeownership gap.” Democratic California Sen. Kamala Harris is pushing a $100-billion program to assist up to 4 million minority families to purchase homes. Democratic Massachusetts Sen.