Fines for all - Positive Punishment 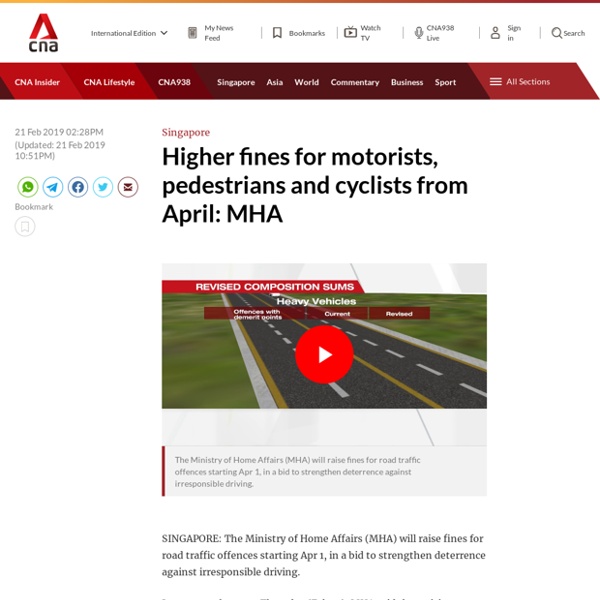 SINGAPORE: The Ministry of Home Affairs (MHA) will raise fines for road traffic offences starting Apr 1, in a bid to strengthen deterrence against irresponsible driving. In a press release on Thursday (Feb 21), MHA said that raising composition sums, or fines, would ensure that they remain effective as a deterrent and curb the uptrend in road traffic offences. "It is important to nip unsafe driving in the bud, before serious accidents happen and people are killed or hurt," said MHA. READ: More drink-driving accidents, motorists running red lights: Police "For road traffic offences that do not involve egregious driving behaviour and do not result in harm caused to others, the offence may be compounded, in lieu of prosecution," the ministry added. Fines for motorist road traffic offences were last reviewed in 2000. For committing an offence with zero demerit points such as an illegal U-turn, drivers of light vehicles could be fined S$100, up from the current S$70.

Road traffic situation improves but spike in accidents involving elderly pedestrians SINGAPORE: The general road traffic situation improved in 2019, with fewer accidents, injuries and fatalities, the Singapore Police Force (SPF) said in a news release on Monday (Feb 10). Statistics from the Annual Road Traffic Situation 2019 report from police also showed that the number of fatal accidents and fatalities fell to a record low. However, police said an increase in the number of accidents involving elderly pedestrians and motorcyclists continued to be of concern. The number of accidents and violations from speeding and red-light running also went up.

[Positive Punishment] Fines in Singapore - 9 Things You Don't Want To Be Caught Doing - MoneySmart.sg Singapore is not known as a fine city for nothing. Just making sure you don’t murder someone or peddle drugs on the street isn’t enough to keep you safe from the ever-present threat of fines. So get acquainted with the fines in Singapore before you unwittingly commit an offence. Here are the 9 most common ones. Fines in Singapore – 9 things you don’t want to be caught doing 1. Safety on point: Demerit point penalties for traffic violations to start PHUKET: Phuket Provincial Police Deputy Commander Col Phakin Na-ranong, who also serves as the island’s Traffic Police Chief, has confirmed that the points-based system of penalties for those caught breaking traffic laws will begin nationwide on Dec 19. A police officer checks a motorcycle rider’s driver’s licence in Patong this week. Photo: Tanyaluk Sakoot The move is being heralded as a way to finally rein in wayward drivers of cars and motorbikes, who repeatedly flout traffic laws on the premise they can just pay the fine and continue their dangerous driving habits. From Dec 19, police officers issuing tickets for moving violations will update the details of the fine, including which driver has been caught, to a national database which every police station in the country will be able to access, Col Phakin explained. “The system used is the same one that used in issuing e-tickets, which is already connected to the Department of Land Transport database.

(Negative Punishment - Resource Two) Website: 55 months' jail and lifetime driving ban for driver of Maserati that dragged cop along road for over 100m, Courts & Crime News SINGAPORE - A Maserati driver whose car dragged a police officer for more than 100m along Bedok Reservoir Road in 2017 was sentenced on Tuesday (July 28) to four years and seven months' jail with a lifetime driving ban. District Judge Ng Peng Hong, who said that Lee Cheng Yan's offences "warranted a retributive and deterrent sentence", also ordered him to pay a fine of $3,700. In December last year after a five-day trial, the judge found Lee, now 36, guilty of voluntarily causing grievous hurt to the policeman, Staff Sergeant Khairulanwar Abd Kahar, 26.

Why compliments make us feel so good Your haircut looks great. Your speech was so moving. You are a really good friend; I can’t tell you how great it was to talk last week when I was upset. Compliments make us feel good — both giving and receiving them. Feeling valued and appreciated are basic human needs, explains Marcia Naomi Berger, a licensed clinical social worker and psychotherapist in San Rafael, California, and author of "Marriage Meetings for Lasting Love: 30 Minutes a Week to the Relationship You've Always Wanted". Road Safety Tips A safe road journey cannot be taken for granted! Like Gracious Joseph, remember to always exercise patience and graciousness. Stay alert, drive carefully and follow traffic rules, signs, and signals. Follow these safe-driving tips and habits to enhance your experience on the roads, and make your journeys more safe and pleasant. Never drink and drive. Never get behind the wheel when you’re tired.

[Negative Punishment] Penalties for Dangerous Driving for Singapore Drivers Perhaps you’re a fan of the Fast & Furious film franchise and want to try out those cool car stunts for yourself. Or maybe you think you have the hots to be Singapore’s Best Car Drifter just because you own a sweet car. Or maybe you’re just in a rush and are cutting in and out of the lanes so you can get home faster. All these actions could get you charged for dangerous driving in Singapore. Do you know what the penalties are for drivers convicted of this offence? TODAYonline SINGAPORE — Motorists who have accumulated more than half of their maximum allowable demerit points now have a chance to redeem themselves via the Traffic Police’s Safe Driving Course (SDC), set to be introduced next month. Designed to educate motorists on safe driving techniques, correct dangerous driving behaviour and encourage good road habits, the SDC is an enhancement to the Driver Improvement Points System (DIPS). Motorists who complete the SDC will have three demerit points cancelled from their driving records, but they can only get demerit points cancelled twice during their lifetime.

(Positive Punishment - Resource Two) Website: Police officer fined S$200, 12 demerit points for beating red light - TODAYonline SINGAPORE — A police officer has been fined $200 and given 12 demerit points for beating a red light last month. In a video recorded by an in-car camera on June 4 and posted online, a police car is seen driving through a red traffic signal at a T-junction at Bukit Batok West Avenue 5 and Bukit Batok Street 31. The lights had turned in favour of adjacent traffic, but the police vehicle drove through the junction toward a pedestrian crossing where people were crossing the road. Cyclist road safety practices SINGAPORE - She was cycling down a main road in November 2017 when suddenly, a car from a side road accelerated and hit her. Fortunately, national cyclist Chelsie Tan, who had the right of way, reacted quickly and prevented a potentially serious accident. "We came into contact, but I pushed myself off from the car body and, fortunately, I didn't fall," said the 29-year-old. "After that incident, I learnt that it's important not to assume that drivers are aware of you and will react accordingly." In February, new regulations for cyclists and users of personal mobility devices (PMDs) came into force to create a safer environment for all road users. One such regulation is the compulsory use of a helmet.