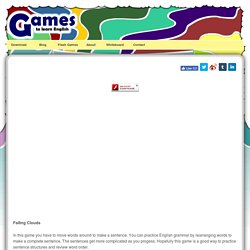 You can practice English grammar by rearranging words to make a complete sentence. The sentences get more complicated as you progess. Hopefully this game is a good way to practice sentence structures and review word order. Grammar is an important part of learning English as it is something that differs between languages. Edit – In response to numerous comments and emails, the game is now slower giving more time to move the clouds around. SVOMPT - word order in English.

SVOMPT rule is one of the most important rules in English. 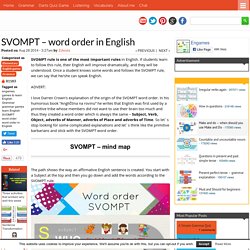 If students learn to follow this rule, their English will improve dramatically, and they will be understood. Once a student knows some words and follows the SVOMPT rule, we can say that he/she can speak English. I love Darren Crown’s explanation of the origin of the SVOMPT word order. In his humorous book “Angličtina na rovinu” he writes that English was first used by a primitive tribe whose members did not want to use their brain too much and thus they created a word order which is always the same – Subject, Verb, Object, adverbs of Manner, adverbs of Place and adverbs of Time. So let´s stop looking for some complicated explanations and let´s think like the primitive barbarians and stick with the SVOMPT word order.

SVOMPT – games and quizzes At the moment you feel you understand the grammar it is time to put your knowledge into practice. If you want to play the quiz on the full screen, click on the button below. Word order. Grammar exercises: word order. Word order English S-V-O, place and time. English Sentence Structure: 4 Types of English Sentences. Simple Sentence A simple sentence contains one independent clause. 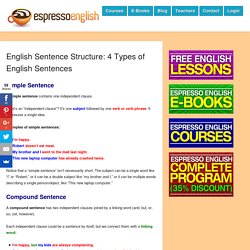 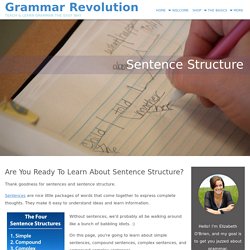 Thank goodness for sentences and sentence structure. Sentences are nice little packages of words that come together to express complete thoughts. They make it easy to understand ideas and learn information. Without sentences, we'd probably all be walking around like a bunch of babbling idiots. :) Breaking News English Lessons: Easy English News. Grammar - Basic sentence structure. Basic Sentence Structure There are five basic patterns around which most English sentences are built.* They are as follows: At the heart of every English sentence is the Subject-Verb relationship. 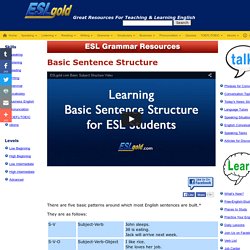