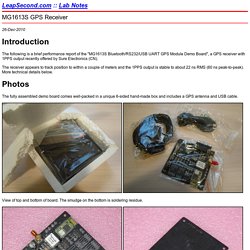 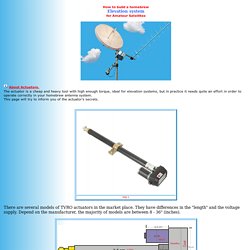 The actuator is a cheap and heavy tool with high enough torque, ideal for elevation systems, but in practice it needs quite an effort in order to operate correctly in your homebrew antenna system.This page will try to inform you of the actuator's secrets. There are several models of TVRO actuators in the market place. They have differences in the "length" and the voltage supply. Depend on the manufacturer, the majority of models are between 8 - 36" (inches). The picture above (FIG.2) shows the dimensions of 12" actuator and the following "animation" (FIG.3) shows how it works. SATRAN - Satellite Tracking Antenna. SATRAN satellite antenna rotator » Danaco. How to Design a Precise Inclinometer on a Custom PCB - Projects.

This project describes how to design a custom inclinometer subsystem capable of measuring angles accurately down to three-thousandths of a degree. 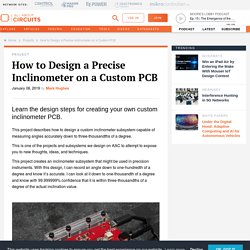 This is one of the projects and subsystems we design on AAC to attempt to expose you to new thoughts, ideas, and techniques. This project creates an inclinometer subsystem that might be used in precision instruments. With this design, I can record an angle down to one-hundredth of a degree and know it’s accurate. I can look at it down to one-thousandth of a degree and know with 99.999999% confidence that it is within three-thousandths of a degree of the actual inclination value. The final build of the project. ISS Sighting Locations - Blacksburg, Virginia, United States. The following ISS sightings are possible from Monday Dec 14, 2020 through Tuesday Dec 29, 2020 *If you are signed up for alerts please note that you will only receive alerts for flyovers that will reach a Max Height of at least 40°. 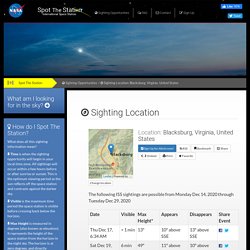 These flyovers provide the best chance for a sighting opportunity because they are visible above most landscapes and buildings. Azimuth Magnetic Sensor. General Use We use cookies, tracking pixels and related technologies on our website. 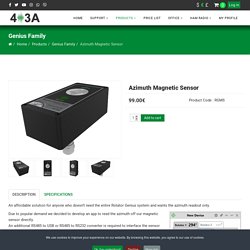 Cookies are small data files that are served by our platform and stored on your device. Our site uses cookies dropped by us or third parties for a variety of purposes including to operate and personalize the website. Also, cookies may also be used to track how you use the site to target ads to you on other websites. Third Parties Our website employs the use the various third-party services. Tek2000 antenna on AzEl N2QG. Sean Kutzko, KX9X – OnAllBands. Interviews Finding and Maintaining Younger Ham Radio Operators A long-heralded cry in the world of Ham radio is the call for younger Hams. 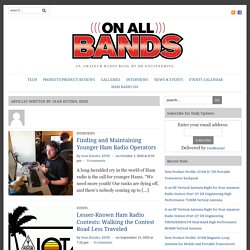 Visual Satellite Observer's Home Page. From left to right the above images are: A Soyuz manned capsule. 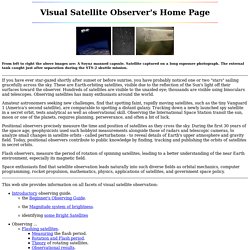 Satellite captured on a long exposure photograph. The external tank caught just after separation during the STS-2 shuttle mission. If you have ever star-gazed shortly after sunset or before sunrise, you have probably noticed one or two "stars" sailing gracefully across the sky. These are Earth-orbiting satellites, visible due to the reflection of the Sun's light off their surfaces toward the observer. Hundreds of satellites are visible to the unaided eye; thousands are visible using binoculars and telescopes. Amateur astronomers seeking new challenges, find that spotting faint, rapidly moving satellites, such as the tiny Vanguard 1 (America's second satellite), are comparable to spotting a distant galaxy. 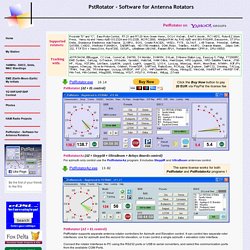 This mode is BD-90. A second bidirectional mode (BD-0) supports the SteppIR antennas. With “BD-0” or "BD-90" checked in Setup, the programs will start in one of these two bidirectional modes. Or just press one of the BD buttons to enter in the bidirectional mode. Write a callsign in the Call text box and press the QRZ button in order to search online the QRZ.com callsign database. 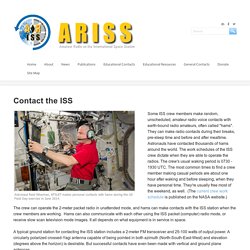 The Ericsson HT is about 5W and uses RS0ISS. It will respond to the alias "ARISS". With the Ericsson, you'll have better luck using more power and, if you have it, FM Narrow mode.For information about using the ISS packet system, check out this resource provided by JoAnne Maenpaa, K9JKM. SSTV OperationsSlow Scan Television (SSTV) images can be transmitted from the International Space Station. How to hear the ISS. International Space Station The amateur radio station on the ISS can be received using very simple equipment. 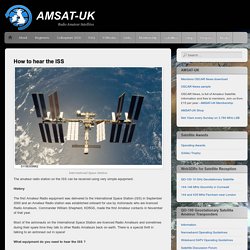 History The first Amateur Radio equipment was delivered to the International Space Station (ISS) in September 2000 and an Amateur Radio station was established onboard for use by Astronauts who are licenced Radio Amateurs. Commander William Shepherd, KD5GS, made the first Amateur contacts in November of that year.

Most of the astronauts on the International Space Station are licenced Radio Amateurs and sometimes during their spare time they talk to other Radio Amateurs back on earth. Rotator MkII construction. Rotator MkII article. SARCTRAC Manual. Products - SARCNET. SARCTRAC - Satellite Antenna Rotator Controller and TRACker SARCTRAC was developed so that students at our School Amateur Radio Clubs can have fun and learn about Low Earth Orbiting satellites during our lunchtime sessions.

To make friends with a satellite you first have to know when and where it will be; point a small, directional antenna at it and use an Amateur Radio transceiver to listen or talk to it. It is a bit like fishing in the sky and just as challenging. It is really exciting when the kids hear their first satellite and then realise where it is. They always ask. SARCTRAC takes minutes to set up, in the playground, on a summit or down at our local footy oval.

Amateur Radio Station G0KLA and AC2CZ. Rotator v3 - SatNOGS. Introduction v3 marks a major re-haul of the SatNOGS Rotator design, with learnings from v2 applied. You can see a lot of the thinking and background research that was conducted prior to v3 development in this thread. Also in this wiki page you can also find a "How to build the rotator", mechanical analysis and all documentation about the SatNOGS rotator. Also in this list is presented different rotators, either commercial or DIY builds. Specifications. Cheap Rotor Controller. February 2012 - W9KE The 'Cheap Rotor Controller' is a full function USB controller for the Yaesu G-5500 rotor system that can be built for less than $20. The low cost is achieved without any dodgy eBay LCD displays or jumble of parts and wires plugged into a protoboard. It works with SatPC32 and may work with other tracking programs that use the Yaesu GS-232 commands.

In addition to being cheap it is full featured. Backlit 2x16 LCD display, in circuit programmable and USB interface. The low cost of the controller is made possible in large part due to a promotion Texas Instruments is running to showcase their MSP430 Value Line devices. The picture below shows the controller on top of the rotor control box. The picture below shows the Cheap Rotor Controller from the back. Cheap Rotor Controller. Jerry. Presented here is a high-performance, circularly polarized omni-directional antenna that is easy to build, easy to tune, inexpensive, and will work all the mode J Low Earth Orbit (LEO) satellites.

I have built several of the traditional "eggbeaters" from plans floating around on the Internet, but was never satisfied with the overall performance. This design is the outcome of my investigations into methods of improving the performance of the "original" eggbeater without obviating the simple construction. Use a Surplus Primestar Dish as an IEEE 802.11 Wireless Networking Antenna. Primestar was recently purchased by Direct TV who is phasing out all the Primestar equipment. Satellite tracker (+ARISS) Haystack Observatory: VSRT. Versatile System for Learning about Radio Telescopes. Final Report: 11 GHz Solar Intensity Interferometer w/rtl-sdr and GNU Radio. Wow! signal. UPennEoR/MiniRadioTelescope: Arduino and python code for a mini-radio telescope. A Miniature Radio Telescope In Every Backyard.

You probably wouldn’t expect to see somebody making astronomical observations during a cloudy day in the center of a dense urban area, but that’s exactly what was happening at the recent 2019 Philadelphia Mini Maker Faire. Professor James Aguirre of the University of Pennsylvania was there demonstrating the particularly compact Mini Radio Telescope (MRT) project built around an old DirecTV satellite dish and a smattering of low-cost components, giving visitors a view of the sky in a way most had never seen before.

Thanks to the project’s extensive online documentation, anyone with a spare satellite dish and a couple hundred dollars in support hardware can build their very own personal radio telescope that’s capable of observing objects in the sky no matter what the time of day or weather conditions are. NASA's Software Catalog. About — CubeSat. Build Your Own Thrust Vectored Rockets For Vertical Landings Like SpaceX. If you love rockets, you can’t help but notice that real space launch vehicles lift off the pad slowly,but model rockets zip up like darts.

That’s how I became obsessed with using thrust vector control (TVC) — gimbaling the rocket motor — instead of fins to keep model rockets upright, so they can launch, and land, far more realistically. Satellite Technology: Information & Tutorials » Electronics Notes. The uses of satellites and satellite technology are many fold. Since the first rockets entered the upper reaches of the atmosphere and then started to put satellites into orbit, the number of applications to which their technology has been directed has increased significantly. Satellites and the associated technology required to place them in to orbit is very expensive, but over the years it has developed significantly since the early days or Telstar and Early Bird, etc.