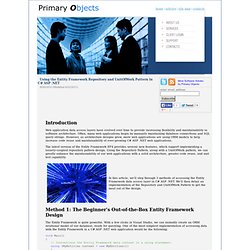 With a few clicks in Visual Studio, we can instantly create an ORM relational model of our database, ready for querying. One of the most simplest implementation of accessing data with the Entity Framework in a C# ASP .NET web application would be the following: void Main() { // Instantiate the Entity Framework data context in a using statement. using (MyEntities context = new MyEntities()) { // Create a dragon. Dragon dragon = new Dragon(); dragon.Name = "Fang"; dragon.Age = 210; // Create a weapon. The repository pattern explained and implemented. The pattern documented and named “Repository” is one of the most misunderstood and misused. 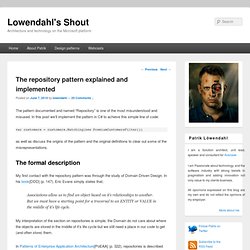 In this post we’ll implement the pattern in C# to achieve this simple line of code: var customers = customers.Matching(new PremiumCustomersFilter()) as well as discuss the origins of the pattern and the original definitions to clear out some of the misrepresentations. The formal description My first contact with the repository pattern was through the study of Domain Driven Design. Associations allow us to find an object based on it’s relationships to another. My interpretation of the section on repositories is simple, the Domain do not care about where the objects are stored in the middle of it’s life cycle but we still need a place in our code to get (and often store) them. In Patterns of Enterprise Application Architecture[PoEAA] (p. 322), repositories is described as: Mediates between the domain and the data mapping layers using a collection-like interface for accessing domain objects. 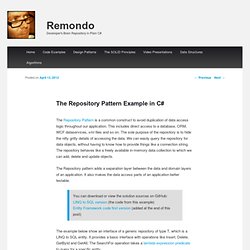 This includes direct access to a database, ORM, WCF dataservices, xml files and so on. The sole purpose of the repository is to hide the nitty gritty details of accessing the data. We can easily query the repository for data objects, without having to know how to provide things like a connection string.

The repository behaves like a freely available in-memory data collection to which we can add, delete and update objects. Repository Pattern with Entity Framework 4.1 and Code First. Introduction A popular pattern for ORM data access is the Repository pattern. 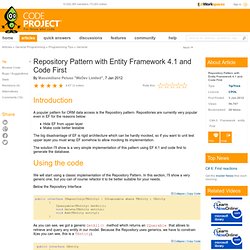 Repositories are currently very popular even in EF for the reasons below: Hide EF from upper layer Make code better testableThe big disadvantage of EF is rigid architecture which can be hardly mocked, so if you want to unit test upper layer you must wrap EF somehow to allow mocking its implementation. The solution I'll show is a very simple implementation of this pattern using EF 4.1 and code first to generate the database. Implementing the Repository Pattern. What purpose does the Repository Pattern have? - Fredrik Normén.

I have watch Rob Conery’s great screencast about MVC Storefront. 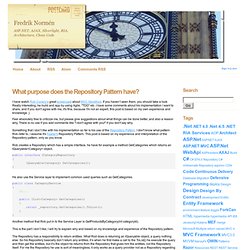 If you haven’t seen them, you should take a look. Really interesting, he build and app by using Agile, "TDD" etc. I have some comments about his implementation I want to share, and if you don't agree with me, it's fine, because I'm not an expert, this post is based on my own experience and knowledge ;) Feel absolutely free to criticize me, but please give suggestions about what things can be done better, and also a reason why. There is no use if you add comments like "I don't agree with you! " Something that I don’t like with his implementation so far is his use of the Repository Pattern. Rob creates a Repository which has a simple interface, he have for example a method GetCategories which returns an IQueryable<Category> object. public interface ICategoryRepository { IQueryable<Category> GetCategories(); } He also use the Service layer to implement common used queries such as GetCategories. 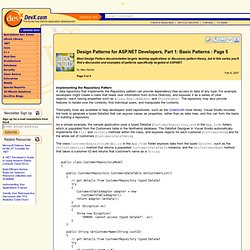 For example, developers might create a class that reads user information from Active Directory, and exposes it as a series of User objects—each having properties such as Alias, EmailAddress, and PhoneNumber. The repository may also provide features to iterate over the contents, find individual users, and manipulate the contents. Third-party tools are available to help developers build repositories, such as the CodeSmith tools library. Visual Studio includes the tools to generate a typed DataSet that can expose values as properties, rather than as data rows, and this can form the basis for building a repository.