Bioenergy, Fuels and Products Conference & Expo. Which Pine Trees Are Poisonous? Pine tree needles and resins have a poisonous effect on cats. 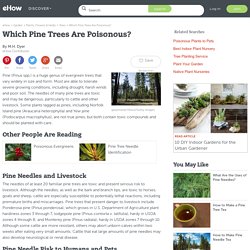 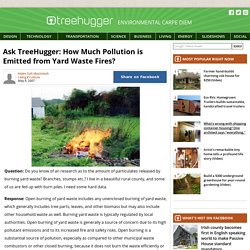 Branches, stumps etc.? I live in a beautiful rural county, and some of us are fed up with burn piles. I need some hard data. Is Burning Trash Bad? There are currently 90 waste-to-energy facilities operating in the country that torch 14 percent of our trash and convert the heat into electricity. 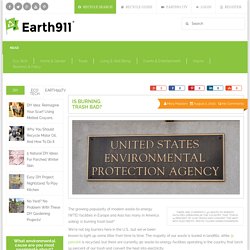 Photo: Flickr/james.thompson The growing popularity of modern waste-to-energy (WTE) facilities in Europe and Asia has many in America asking: is burning trash bad? We're not big burners here in the U.S., but we've been known to light up some litter from time to time. The majority of our waste is buried in landfills, while 31 percent is recycled, but there are currently 90 waste-to-energy facilities operating in the country that torch 14 percent of our trash and convert the heat into electricity. John Norton, engineering consultant and owner of Norton Engineering LLC, ran a now-defunct WTE plant in Dayton, Ohio for over a decade, and he is familiar with the internal goings-on of waste-to-energy and the misconceptions that often surround the facilities. 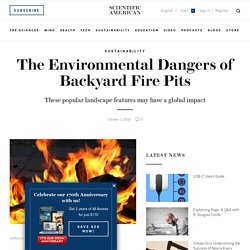 How bad are they on the environment? -- Michael O’Laughlin, Tigard, OR With Fall setting in and the mercury starting to drop, many of us want to extend our time outdoors, and sitting around a backyard fire pit has become one of the most popular means to do so. But even though it may be fun—s’mores anyone? —it is not good for the environment, especially during times when air quality is already poor. It’s hard to assess the larger impact of backyard fire pits on local or regional air quality, but no one questions the fact that breathing in wood smoke can be irritating if not downright harmful.

Fine particles also aggravate chronic heart and lung diseases, and have been linked to premature deaths in those already suffering from such afflictions. Geography and topography play a role in how harmful wood smoke can be on a community-wide level. CONTACTS: U.S. Environmental Effects. Burn Barrel in Back Yard Backyard burning produces various compounds toxic to the environment including nitrogen oxides, volatile organic compounds (VOCs), carbon monoxide, and particle pollution. 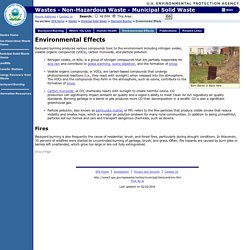 Nitrogen oxides, or NOx, is a group of nitrogen compounds that are partially responsible for acid rain and contribute to global warming, ozone depletion, and the formation of smog. Volatile organic compounds, or VOCs, are carbon-based compounds that undergo photochemical reactions (i.e., they react with sunlight) when released into the atmosphere. The VOCs and the compounds they form in the atmosphere, such as ozone, contribute to the formation of smog. Carbon monoxide, or CO, chemically reacts with sunlight to create harmful ozone. Is It Better to Bury Brush or Burn It? Why Burning Yard Waste Is Bad.

Is Burning Wood Bad for the Environment? The pungent scent of wood burning often evokes memories of simpler, more natural pleasures such as campouts or evenings around a fireplace. 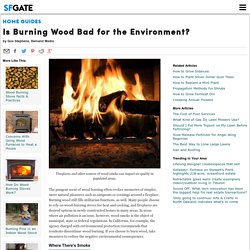 Burning wood still fills utilitarian functions, as well. Many people choose to rely on wood-burning stoves for heat and cooking, and fireplaces are desired options in newly constructed homes in many areas. In areas where air pollution is an issue, however, wood smoke is the object of municipal, state or federal regulations. In California, for example, the agency charged with environmental protection recommends that residents discontinue wood burning. If you choose to burn wood, take measures to reduce the negative environmental consequences. Where There's Smoke. Is Burning Wood Good for the Environment? How many times have you gone for a walk on a cold, still night, and caught thet scent of wood smoke in the air? 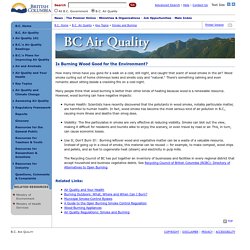 Wood smoke curling out of home chimneys looks and smells cozy and "natural. " There's something calming and even romantic about sitting beside a crackling fire on a cold night. Many people think that wood burning is better than other kinds of heating because wood is a renewable resource. However, wood burning can have negative impacts: Human Health: Scientists have recently discovered that the pollutants in wood smoke, notably particulate matter, are harmful to human health. Related Links: