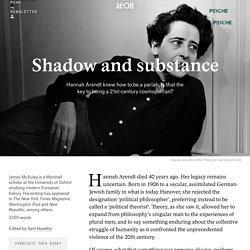 Her legacy remains uncertain. Born in 1906 to a secular, assimilated German-Jewish family in what is today Hanover, she rejected the designation ‘political philosopher’, preferring instead to be called a ‘political theorist’. The Art of Fiction No. 198. Why Stefan Zweig’s Illusion of a Good Europe That Never Was Bewitches Us Still - Tablet Magazine. Svetlana Boym. The word “nostalgia” comes from two Greek roots: νόστος, nóstos (“return home”) and ἄλγος, álgos (“longing”). 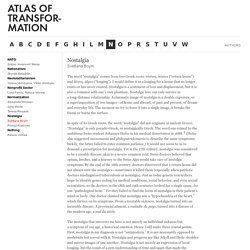 I would define it as a longing for a home that no longer exists or has never existed. Nostalgia is a sentiment of loss and displacement, but it is also a romance with one’s own phantasy. The student linguist who started a pro-refugee fashion revolution. I thought my future lay in classical music. 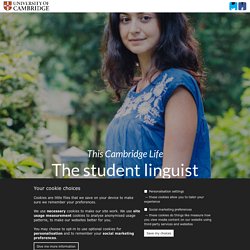 I attended the Junior Department of the Royal College of Music for three years while I was at school and initially, I was offered a place to study music at Cambridge. But during my gap year my focus changed. For some time I’d wanted to become more in touch with my Iranian roots, and I’d started learning how to read and write in Farsi, to complement my spoken Farsi. The Digital Nomads Did Not Prepare for This. After six months, Mr. 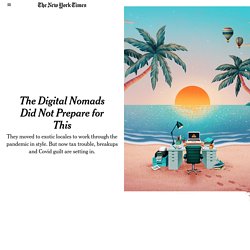 Mao and his wife, Chuchu Wang, needed to return to the United States for her to keep her green card. He noticed a change: The Facebook friends who had taken out their coronavirus-rage on him came around. Now, Mr. Mao said, they’re asking him how they can pull off a similar escape. Perhaps the worst potential outcome not advertised by those who’ve escaped: You and your employer could end up in tax audit hell. Lots of American travelers try to use a tax rule that carves out exemptions for Americans living abroad. An Evening with Ayi Kwei Armah (excerpt from transcript) An Evening with Ayi Kwei Armah (excerpt from transcript) Iniko Ujaama: I am not sure when this actually took place. 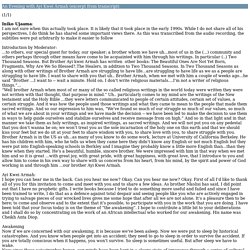 It is likely that it took place in the early 1990s. BBC Arts - BBC Arts - Translation matters: The unsung heroes of world literature. Subscribe to read. Anthea Bell, Translator of Freud, Kafka and Comics, Dies at 82. LONDON — Anthea Bell, the rare translator who, despite her best efforts to stay hidden, became a name herself in bringing works by Franz Kafka, Sigmund Freud and other major writers to English audiences, died on Thursday in Cambridge, England. 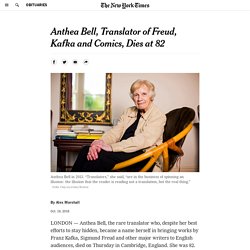 She was 82. Her death, in a hospital, was confirmed by her son Oliver Kamm, who said her health had been in decline since she was left frail by a stroke in 2016. “All my professional life, I have felt that translators are in the business of spinning an illusion: the illusion that the reader is reading not a translation, but the real thing,” Ms. Bell told a conference in 2004. She added that she liked simple translations that could “seduce readers” into loving the translated books. What Seamus Heaney's last text tells us about our digital lives.

This New Era. MY MOTHER HAD SOLD the house. 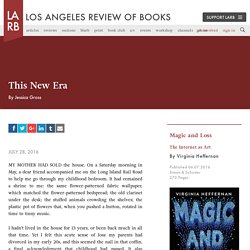 Last exit to nowhere: John Gray on the lost world of Stefan Zweig. The passenger: Zweig on a bus in New York, 1941, the year before he committed suicide. 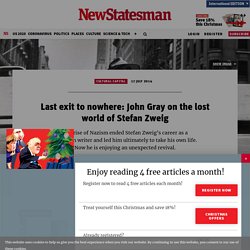 Photo: Kurt Severin, courtesty of David H Lowenherz The Impossible Exile: Stefan Zweig at the End of the World George Prochik Granta, 416pp, £20 In his memoir The World of Yesterday, which he finished revising not long before he took his own life, Stefan Zweig described the Europe that he and his generation had lost: When I attempt to find a simple formula for the period in which I grew up, prior to the First World War, I hope that I convey its fullness by calling it the Golden Age of Security. Everything in our almost thousand-year-old Austrian monarchy seemed based on permanency, and the State itself was the chief guarantor of this stability . . . 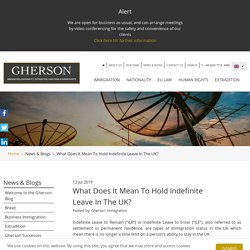 Some examples of the benefits of holding ILR or ILE include: being free to work in the UK in a business, employment (including self-employment) or profession;being free to study in the UK;generally being able to access healthcare under the National Health Service (although there may be some exceptions). Indefinite leave to remain in the UK: your rights and status. If you would like to find out how to apply for ILR please go to the application guidance to find out if you are eligible. 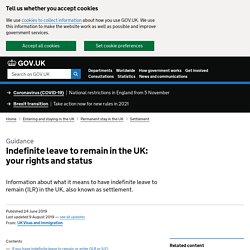 You can apply for NTL if: Intercommunalism (1974) - Viewpoint Magazine. On September 5, 1970, Huey P. Newton, co-founder of the Black Panther Party (BPP), introduced his theory of intercommunalism at the Revolutionary People’s Constitutional Convention in Philadelphia. He later expanded on this theory before an audience at Boston College in November of that year, and then again In February 1971 during a joint talk he gave with psychologist Erik Erikson across several days at Yale University and later in Oakland. Newton’s opening remarks at Yale lasted over an hour but were reduced to about ten pages in the subsequently published In Search of Common Ground.

As a philosophical foundation for his remarks on intercommunalism, that introductory speech included an engagement with the work of Hegel, Marx, Freud, Jung, Kant, Pierce, and James, among others. . – Delio Vásquez. The World of Yesterday. Cosmopolitanism - an overview. The focus and structure of the book Talja (2002) argues that information sharing practices in academic communities, although recognised in the literature on scholars’ information seeking as omnipresent, ‘have rarely been taken as objects of analysis in their own right’ (p. 143).

The same could be said for political impact on information practices. Talja, Keso, and Pietiläinen (1999) argue that the focus of IB field on the individual ‘tends to exclude controversial issues, questions of power and politics’ (p. 761). While academic communities (Olsson, 2003; Talja, 2002), race and migration (Chatman, 1991; Fisher, Durrance, & Hinton, 2004; Johnson, 2003) and relations between national culture and information processes (Steinwachs, 1999) were topics of IB research, the impact of nationalism on information sharing practices in academic communities was not a focus of this field. Chapters 4, 5 and 6Chapter 4Chapter 5Chapter 6 deals with the fieldwork conducted at a Bosnian university. Chapter Four: Cosmopolitanism and the Future of Fragmented Hybrid Identities (Dalia Elawad) : Living Beyond the Borders.

Cross-border migration has resulted in many social, cultural, economic, and political challenges that need attention. Globalization, migration, and transnationalism have a strong impact on the lives of diasporic immigrants and refugees. Transnationalism and diaspora, which result from globalization and migration, create transnational social spaces, fields, and formations that affect the everyday practices and engagements of migrants and refugees. Living Beyond the Borders highlights the Canadian immigration policies and the challenges faced by migrants, particularly visible minorities.

Drawn from life: why have novelists stopped making things up? “That was the morning that white people finally realised the president of the United States was a white supremacist, he’d as good as said so, there was a cartoon in the Guardian of the White House with a Klan hood over the roof. Homi Bhabha's Concept of Hybridity. One of the most widely employed and most disputed terms in postcolonial theory, hybridity commonly refers to the creation of new transcultural forms within the contact zone produced by colonization.