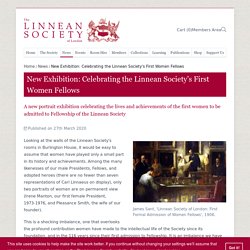 Among the many likenesses of our male Presidents, Fellows, and adopted heroes (there are no fewer than seven representations of Carl Linnaeus on display), only two portraits of women are on permanent view (Irene Manton, our first female President, 1973-1976, and Pleasance Smith, the wife of our founder). This is a shocking imbalance, one that overlooks the profound contribution women have made to the intellectual life of the Society since its foundation, and in the 116 years since their first admission to Fellowship. It is an imbalance we have attempted to redress in a new exhibition of photographic portraits in the Society's Library.

She worked with D.H. Royal College of Physicians of Edinburgh. This post was written in relation to the College’s Physicians' Flowers exhibition. 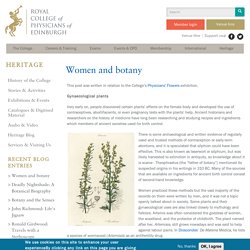 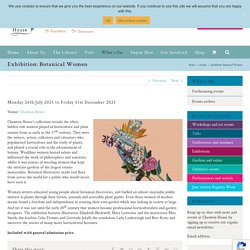 They were the writers, artists, collectors and educators who popularised horticulture and the study of plants, and played a crucial role in the advancement of botany. Wealthier women hosted salons and influenced the work of philosophers and scientists, whilst it was armies of weeding women that kept the intricate gardens of the largest estates immaculate. Botanical illustrators made real flora from across the world for a public who would never have seen it. ANH Virtual Issues. La Botaniste – a lady in the margins. Isabella’s plant collecting was largely at a local level. 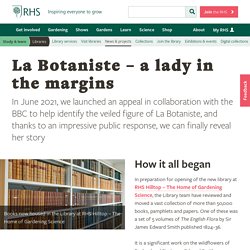 There are frequent references to Worcestershire, the River Severn, Great Malvern, and critically for our identification, Madresfield and the Rhydd as evidenced in the inscription here which reads ‘The Rhydd Worcestershire’. However, some annotations demonstrate plant hunting expeditions further afield, for example, in Hertfordshire, Tewksbury and significantly Bishop’s Hull in Somerset. 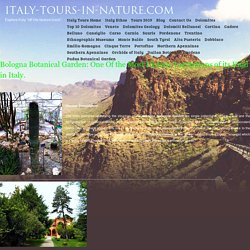 With regard to the collections, the most noteworthy one is undoubtedly that of succulent plants (see an image above). It is one of the largest in Italy, and it was created in the first half of the 20th century thanks to the efforts of Giuseppe Lodi, then Professor of Botany. Two other glasshouses in the garden contain tropical plants, amongst which are some beautiful epiphytic orchids, and several European and exotic carnivorous plants. 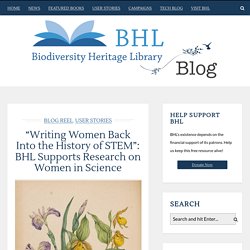 Contributed in BHL from the Canadian Museum of Nature Library. In 1868, one of the first serious botanical works in Canada was published. Entitled Canadian Wild Flowers, the work treated nearly three dozen of “the most remarkable” wildflowers found in Canada. The publication is notable for more than its position as an early work on Canadian botany. During a time when women were largely unwelcome in the male-dominated scientific world, this pioneering book was written and illustrated by women. Canadian Wild Flowers was authored by naturalist Catharine Parr Traill (1802-99), a trailblazer in research on Canada’s natural history. Celebrating Women & their contributions to Natural History published in "Archives of Natural History" - Society for the History of Natural History. 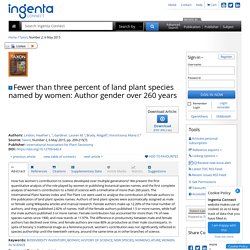 We present the first quantitative analysis of the role played by women in publishing botanical species names, and the first complete analysis of women's contribution to a field of science with a timeframe of more than 260 years. The International Plant Names Index and The Plant List were used to analyse the contribution of female authors to the publication of land plant species names. Authors of land plant species were automatically assigned as male or female using Wikipedia articles and manual research.

Female authors make up 12.20% of the total number of authors, and they published 2.82% of names. Half of the female authors published 1.5 or more names, while half the male authors published 3 or more names. No Article Media. Marine Botanist Isabella Aiona Abbott and More Women to Know this Asian American and Pacific Islander Heritage Month. By Healoha Johnston of the Smithsonian Asian Pacific American Center and Sara Cohen of Because of Her Story Our Smithsonian collections highlight the achievements of countless Asian American and Pacific Islander women. 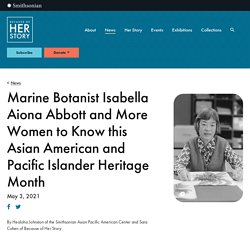 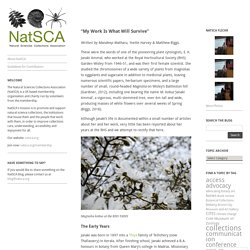 These were the words of one of the pioneering plant cytologists, E. K. Janaki Ammal, who worked at the Royal Horticultural Society (RHS) Garden Wisley from 1946-51, and was their first female scientist.

Yale: Hepatics and mosses from the herbarium of the Countess of Aylesford. Lady Louisa Thynne, an avid collector of natural history specimens, and natural history painter, was born on 25 March 1760, the daughter of Thomas Thynne, 1st Marquess of Bath and Lady Elizabeth Cavendish-Bentinck. 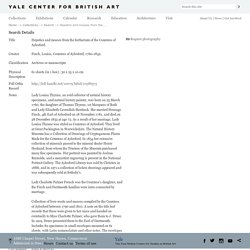 The Real Jeanne Baret and Untangling Women Scientists from the Patriarchy — Lady Science. Although there are large gaps in Baret’s story, we know she was born on the 27th of July in 1740, and that Commerçon hired her as both housekeeper and botanical assistant by spring 1764. We know Commerçon and Baret lived together in Paris, and had a son together that Baret gave up to Paris’s Hôpital des Enfants-Trouvés.

We know she disguised herself as a man to join Louis Antoine de Bougainville’s exploratory expedition around the world as Commerçon’s assistant. During the voyage, we know she did much of the specimen collecting because Commerçon struggled to walk and was “in danger of losing [his] leg… to gangrene” as he wrote in a letter. We know crewmembers assaulted her and likely raped her on New Ireland, part of Papua New Guinea. This was nearly two years into the circumnavigation after which both Commerçon and Baret remained behind on Mauritius, a small French-controlled island in the Indian Ocean.

Commerçon died on the small French-controlled Mauritius on March 13, 1773. Jeanne Baret. By Nicole Tarnowsky, Amy Weiss Mar 26 2019 Jeanne Baret was the first woman ever to circumnavigate the globe, but she did it dressed as a man, as women were not allowed on exploration expeditions. For more than two years, from 1766–1769, she traveled on a French naval vessel captained by Louis Antoine de Bougainville. With tightly wrapped linen bandages to flatten her chest, the sailors knew her as "Jean," until they figured out she was actually Jeanne.

Lydia Becker. Lydia Becker's name on the lower section of the Reformers memorial, Kensal Green Cemetery Lydia Ernestine Becker (24 February 1827 – 18 July 1890) was a leader in the early British suffrage movement, as well as an amateur scientist with interests in biology and astronomy. She is best remembered for founding and publishing the Women's Suffrage Journal between 1870 and 1890. Biography[edit] Born in Cooper Street, Manchester, the oldest daughter of Hannibal Becker, whose father, Ernst Becker had emigrated from Ohrdruf in Thuringia. Lady Edith Blake, Irish polyglot, botanical artist and travel writer. Edith Osborne led a privileged yet troubled childhood. Her father, Ralph Bernal, was a liberal MP and a member of a fledgling political dynasty while her mother, Catherine Osborne, was the daughter of a wealthy baronet with extensive landholdings across Ireland. Their marriage was certainly one of convenience and both seem to have actively loathed each other.

Winifred M. A. Brooke - Wikipedia. Winifred Mary Adelaide Brooke (16 February 1893 - 4 November 1975) was a British botanist, illustrator and author who made scientifically significant collections of botany specimens, including in the Bolivian Andes. The plant genus Misbrookea was named in her honour by Vicki Funk. Sarah Theresa Brooks: Collector for Ferdinand Mueller. Aimée Antoinette Camus. Aimée Antoinette Camus (1 May 1879 – 17 April 1965) was a French botanist. Aimée Camus-Quercus Portal. Aimée Antoinette Camus (1879-1965) Agnes Chase: Women's Fight for Scientific Fieldwork. Mary Strong Clemens was a prolific botanical collector throughout SE Asia, born tomorrow in 1873. After the death of her husband/assistant, she established a collection in a shed of the Queensland Herbarium @QLDScience, where she specialized in the flora.

Named after Rose Clement 25 years after her death. A brilliant botanist who believed she had identified a new species of plant but died before she could prove her theory has had it named in her honour 25 years later. Rose Clement, a scientist at the Royal Botanic Garden Edinburgh, suspected she had found a previously unknown species while detailing the plants of Bhutan, on the eastern slopes of the Himalayas.

Mary Strong Clemens was a prolific botanical collector throughout SE Asia, born tomorrow in 1873. After the death of her husband/assistant, she established a collection in a shed of the Queensland Herbarium @QLDScience, where she specialized in the flora. Jane Colden, America’s first female botanist, classified plants locally. Meet Jane Colden, the 18th century botanist snubbed by Linnaeus. Had she not been a woman, Jane Colden would likely be one of the most famous early American botanists.

Isobel Wylie Hutchison, Collector. Ellen Hutchins Festival (@hutchins_ellen) / Twitter. Isobel Wylie Hutchison: the Calling of Bride – Explorers of the RSGS. Ellen Hutchins: Ireland's First Female Botanist. Josephine's Herbarium in Geneva. E. K. Janaki Ammal “My Work Is What Will Survive” Matilda Knowles. 'Flashes upon the inward eye’ : Wordsworth, Coleridge and ‘Flashing Flowers’ - Wordsworth Trust. Graceanna Lewis: A Naturalist and Abolitionist. Fab to see Gulielma Lister featured here. We explored her work at #MycoBookClub in April. Her illustrations from 'A monograph of the Mycetozoa' are available to browse on Flickr, courtesy of @BioDivLibrary, and an absolute joy!

This specimen was from the same request. The collector was unfamiliar and the backstory of this remarkable lady unfolded-Vera Scarth-Johnson, pig farmer, sugar-cane producer, botanist &amp; artist! Herbarium collections are multidimensional treasure-trove. Meet Mary Somerville: The Brilliant Woman for Whom the Word “Scientist” Was Coined. Harvard University Herbaria & Libraries. Vera Scarth-Johnson, New Publication: Four Holograph Letters from Charlotte Smith to James Edward Smith. Greta Stevenson and Marasmius curranii. U.S.-born botanist Bertha Stoneman taught at South Africa's Huguenot College @HugenoteKollege from 1896 to 1933, founding its herbarium and becoming president of the school in 1928. She was the founding president of the South African Association of Univer.

Connie Taylor: Biology Herbarium dedicated to former professors. Botanist Ellen Powell Thompson—yes, that Powell! Anna Maria Walker orchids. Anna Weber-van Bosse - Scientist of the Day - Linda Hall Library. Charlotte "Shadow" Wheeler-Cuffe born this month in 1867. In the time that she lived in Burma, she formed a botanical garden at Pyin U Lwin and sent plants back to @NBGGlasnevin (where her watercolors were housed after her death).