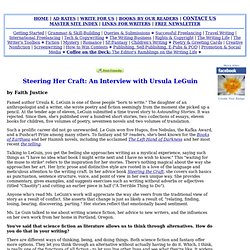 LeGuin is one of those people "born to write. " The daughter of an anthropologist and a writer, she wrote poetry and fiction seemingly from the moment she picked up a pencil. At the tender age of eleven, LeGuin submitted a time travel story to Astounding Stories. It was rejected. Such a prolific career did not go unrewarded. Talking to LeGuin, you get the feeling she approaches writing as a mystical experience, saying such things as "I have no idea what book I might write next and I have no wish to know. " Anyone who's read Ms.

Ms. You've said that science fiction as literature allows us to think through alternatives. There are different ways of thinking, being, and doing things. I have to admit to a certain amount of calculation here. Some authors emphasize the "science" in science fiction or write about aliens, but you use human experience and emotion as the basis of your stories.

All I know how to write about are people and animals. Oh God! All the sad young literary fakes. It should come as no surprise that the long literary con of Dan Mallory began with a fake memoir. 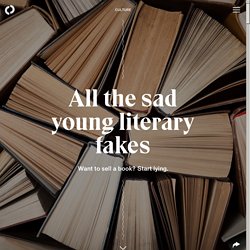 Fabricating pain for profit is, after all, a time honored publishing tradition. Mallory, who published his bestselling, Hollywood-optioned first novel The Woman in the Window under the name A.J. Finn, was exposed last week as a serial liar by the New Yorker. He faked his resume, he faked cancer, he faked his brother’s suicide, he faked that his novel about an agoraphobic woman who thinks she possibly witnessed a crime in her neighbor’s apartment wasn’t just a hodgepodge rip-off of better written works like Hitchcock’s Rear Window, the Barbara Stanwyck film Sorry Wrong Number, and the Holly Hunter and Sigourney Weaver 1980s thriller Copycat.

But what got him into publishing in the first place, where he became an editor and from there a novelist, was a faked memoir. The problem was the story wasn’t true. What made the essay remarkable was its authenticity. Imagining and selling tragedy works. The Creepy Authoritarianism of Madeleine L’Engle. Shirley Jackson, Horror and 'Feminine Perversity' **trigger warning for sexual assault** Although Halloween has already passed us by, as the nights draw longer and the evenings colder, I’d like to consider one of the spookiest novels that I have ever read. 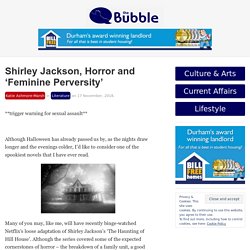 Many of you may, like me, will have recently binge-watched Netflix’s loose adaptation of Shirley Jackson’s ‘The Haunting of Hill House’. Although the series covered some of the expected cornerstones of horror – the breakdown of a family unit, a good old-fashioned haunted house, and plenty of jump scares – I couldn’t help thinking that there was something about it that wasn’t quite right.

And, no, I’m not talking about the multiple appearances of ghosts in the corner of your eye on the TV screen. It wasn’t until I read Nussbaum’s review in the ‘New Yorker’ what I felt was missing in the adaptation finally clicked: ‘raw feminine perversity’[1]. Fear of femininity (and especially emerging feminine sexuality and ‘hysteria’) is, I would argue, ingrained into what is designed to scare us.

Yes, Shakespeare coined words, but that's just the start of his contribution to the English language. You must have read or listened to tons of stories about William Shakespeare, and how he’s still relevant. 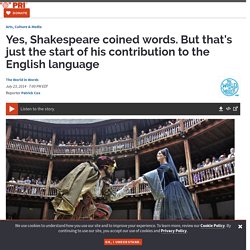 Stories about kids performing his plays. Prisoners performing them. Who knows, maybe even astronauts have recited bits from Hamlet on the International Space Station. If they haven’t yet, they will one day. Shakespeare is bigger than this world; he’s universal. “He’s seen as the quintessential English or British dramatist,” says Maria Delgado, a theater professor at Queen Mary University of London. “Shakespeare’s language is full of resonances of Latin, Spanish or Germanic terms,” she says. Shakespeare sounds good in just about any language.