How The Economic Machine Works by Ray Dalio 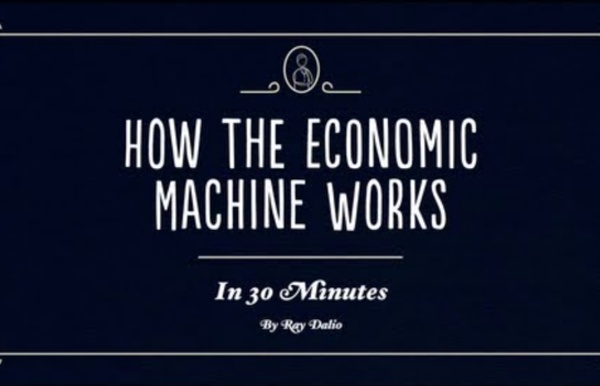 Done for You Systemization - Work the System A Shortcut to Your Next Major Breakthrough. For months, maybe even years, you’ve had my book. As you know, it describes how I went from a prisoner of my business to the master of it. How I went from 80+ hour workweeks to working only 2 hours per week. How I went from near-bankruptcy and teetering on poverty, to living in the Top-1% of income earners in the USA. The solution? Is my book sitting on your shelf gathering dust? How come? If you’d like to systemize your business, but you never seem to get around to it, please keep reading. Below I’ll explain how we will systemize your business FOR YOU. In the beginning, writing Procedures for your entire company is serious Heavy Lifting! Let’s face it. And so, it’s a good possibility it’s not going to happen at all! When we consult with business owners, this #1 concern comes up over and over again: “I know I need procedures to free up my time, but I don’t have time to create them.” What a cruel, vicious cycle. Damned if you do. Maybe. Ask yourself:

American History Work The System Academy Two Enduring Viewpoints Compete < The Formation Of A National Government < History 1990 Congress quickly created departments of State and of the Treasury. Washington appointed Thomas Jefferson as Secretary of State and Alexander Hamilton, his aide during the Revolution, as Secretary of the Treasury. Simultaneously, the Congress established the federal judiciary, setting up not only a Supreme Court, with one Chief Justice (John Jay was named to the post) and five associate justices, but also three circuit courts and 13 district courts. In the first administration, both a Secretary of War and an Attorney General were also appointed. And since Washington generally preferred to make decisions only after consulting those men whose judgment he valued, the American Cabinet came into existence, consisting of the heads of all the departments that Congress might create. Hamilton and Jefferson represented two powerful, though to some extent antagonistic, forces in American life. Hamilton did much else. The Genét incident strained American relations with France.

Fast food CEO: McDonald's has problems. We don't Cheaper gas, a rosier jobs picture and charbroiled burgers: this is the recipe for strong sales at CKE Restaurants, the privately held parent company of fast food chains Carl's Jr. and Hardee's. "I won't give you exact numbers, but our sales have been very good since about the middle of June," CEO Andy Puzder told CNBC in a phone interview. CKE went private in mid-2010 after affiliates of private equity firm Apollo Management bought the chain. Before the takeover, its sales were shrinking. An affiliate of private equity firm Roark Capital Group acquired it in 2013. Not everyone in the fast-food landscape is delivering good numbers. Read More McDonald's to ax some menu items Overall though, the fast-food category is growing, albeit tepidly in part due to McDonald's woes. Despite trouble at the Golden Arches, Puzder says other competitors aren't in the same boat. "The tendency is to look at McDonald's," Puzder said. Read More Fast food really isgetting slower Related Video:

Making the World Safe for Banksters: Syria in the Cross-hairs | WEB OF DEBT BLOG “The powers of financial capitalism had another far reaching aim, nothing less than to create a world system of financial control in private hands able to dominate the political system of each country and the economy of the world as a whole.” —Prof. Caroll Quigley, Georgetown University, Tragedy and Hope (1966) Iraq and Libya have been taken out, and Iran has been heavily boycotted. Syria is now in the cross-hairs. Why? In an August 2013 article titled “Larry Summers and the Secret ‘End-game’ Memo,” Greg Palast posted evidence of a secret late-1990s plan devised by Wall Street and U.S. The “end-game” would require not just coercing support among WTO members but taking down those countries refusing to join. Bank deregulation proceeded according to plan, and the government-sanctioned and -nurtured derivatives business mushroomed into a $700-plus trillion pyramid scheme. These countries were not all Islamic. Here is some data in support of that thesis. The End-game Memo The Holdouts

Online Courses from the World's Experts The first time Andrew went out to raise money for his first product idea, he burnt through months, making every mistake it was possible to make, trying to get investors to say "Yes" while working 18 hour days to pay the bills. It really wasn't very pretty... After falling on his face over and over, Andrew managed to get six guys to back him and give him his first $250K. Since that fateful day, Andrew has raised over $20M of funds but his real passion has been helping entrepreneurs and companies start cool companies and to lock in funding. In fact, during a four year project in the United Kingdom, Andrew helped the UK Government, by working alongside other funding leaders as part of the Investment Taskforce focused on creating a better new Business Start-Up environment. Selected from over 2000 entrepreneurial candidates applying through the Financial Times, Andrew joined the Department of Trade and Industries’ Board of the Small Business Council and the Investment Task Force.

12 Amazing Things Scientists Discovered This Year About People Who Listen to Music In 2014, scientists looked closer than ever before at why exactly music makes us feel so powerfully. And they found some amazing and unprecedented things. Studies revealed that music can shape our personalities and behaviors. And these findings could not have come at a more perfect moment in time: School systems continue to slash arts and music budgets around the country and the war over how much we pay for music is fundamentally a question of how much we value music. Here are 12 amazing things we discovered about music this year: 1. Researchers at Boston Children's Hospital found that early musical training helps children improve their executive functions. Children that started playing music at age 6 showed enhanced activation in the prefrontal cortex, the part of the brain that owns executive functions. 2. One of the first skills that children need to acquire when learning to read and speak is how to pick up on the rhythms of speech. 3. 4. 5. 6. 7. 8. Benjamin D. 9. 10. 11. 12.

The Venn Diagram of Irrational Nonsense The curiously revered world of irrational nonsense has seeped into almost every aspect of modern society and is both complex and multifarious. Therefore rather than attempt a comprehensive taxonomy, I have opted instead for a gross oversimplification and a rather pretty Venn Diagram. In my gross over simplification the vast majority of the multitude of evidenced-free beliefs at large in the world can be crudely classified into four basic sets or bollocks. Namely, Religion, Quackery, Pseudoscience and the Paranormal. However as such nonsensical beliefs continue to evolve they become more and more fanciful and eventually creep across the bollock borders. Religious Bollocks ∩ Quackery Bollocks ∩ Pseudoscientific Bollocks ∩ Paranormal Bollocks = Scientology UPDATE 24th March 2013 Many thanks for the retweets and shares. I have also received the first translated copy of the Venn Diagram produced by Pavle Močilac of the Croatian Society for Promotion of Science and Critical Thinking.

How Sam Carpenter’s Book “Work The System” Revolutionized My Thinking Sam Carpenter’s book “Work The System” revolutionized my thinking. It was more accessible and applicable than other approaches and recently Sam asked ME a bunch of questions. This is a great intersection of Sam’s systems thinking with my obsession with “That special 1% that delivers 50% of the results.” Perry Marshall About the Author Entrepreneur Magazine says: "Perry Marshall is the #1 author and world's most-quoted consultant on Google Advertising. He is referenced across the Internet and by The New York Times, The Washington Post, USA Today, the Chicago Tribune and Forbes Magazine. Last 5 Posts by Perry Bookmark, Share, and Receive Updates... Bookmark this post, or send it to a friend by clicking the social bookmarking icons below.

The Rise Of Sadvertising: Why Brands Are Determined To Make You Cry There was a time in the not so distant past when funny ruled advertising. Whether absurd and awkward, sharp and wry, or broad and ball-busting, comedy in all its forms was the dominant language in marketing. Then something changed. Quietly at first, then in a more pronounced fashion. In the beginning, certain people (not us) would find themselves discreetly, incredulously, wiping a tear from their eye while watching an ad online. But then, things began to escalate. So what the hell is going on? If you look at the current state of media, there’s more value placed on "meaningful" content—inspirational stories that you just have to see, or will change your world, and don’t even ask what happens next because it will simply blow your mind or break your heart or take your breath away. The Upworthy effect can be added to another, larger cultural trend: the trend toward reality. The results are mixed. The first question to ask when it comes to any trend is whether or not it’s really a trend.