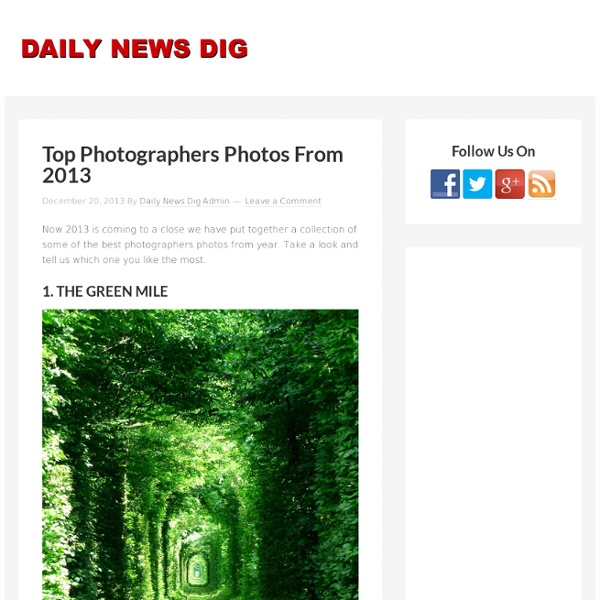 Unexpected Friends Cute A bear, a tiger and a lion. They’re dangerous predators, but they’re friends. The reason they do not attack each other or consider the other as rivals, is that they were brought up together. Some More Rare Historical Pictures Sporting a different mustache than we are used to, Adolf Hitler (on the right) during his military service sometime between 1916-1919. Hitler (on the right) during his military service some time between 1916 – 1919Read more at Sad clown Emmett Kelly, in his performer’s makeup, carrying a bucket of water in the aftermath of the Hartford circus fire of July 6, 1944, in which at least 167 people were killed. The tragedy is often called “the day the clown cried.”

On a Rainy Day...Gregory Thielker's Paintings (Not Photos) - 8 Total Under the Unminding Sky We love Gregory Thielker's art, not only because we can't believe they're actually paintings and not photographs, but also because he can transport us into another time and place. When we look at his paintings, Thielker wants us to experience those moments when we're driving in our car on a cold and rainy day. He wants us to remember the thoughts that go through our heads, how on one hand we feel safe and warm but on the other we're trying to navigate through an uncertain environment.

Rarely Seen Blue Stars Alike in The Ocean. Breathtaking View!! Image source: A Taiwanese photographer Will Ho | Colossal This is very rarely seen thing in the world, millions of bio-luminescent phytoplankton covered the beach and it was like ocean filled with stars. I couldn’t resist sharing it with you guys, this is so awesome. Amazing this is that these glowing start alike only glow when stressed like when you walk or when a wave strikes. Biologists are now began to understand the reason, please check the reason here.

What The World Eats - Shocking Photos This photographic report exposes the proliferation of processed foods in the western diet and in the diets of many developing countries the world over. Is it any wonder that we are seeing increases in diet & lifestyle related diseases? What are your thoughts?

Watch all 10 music videos on this year's Prism Prize shortlist This Sunday, March 23, the second annual Prism Prize will be announced for best Canadian music video of the year, chosen "based on artistic merit." Out of ten clips distinguished by a jury of 90+ Canadian music and film industry professionals, bloggers and journalists for their originality, creativity, style, innovation and effective execution, one will be selected as the winner. Watch all ten 2013 Prism Prize shortlisted videos below, along with a one-line summary of each. Then read our roundtable discussion with all eight nominated Canadian directors. Jessy Lanza, "Kathy Lee" (directed by Lee Skinner) Jessy Lanza: Kathy Lee (Hyperdub 2013)

These Are Photos Of Childrens Bedrooms. But They Represent Something Much, Much More. Millions of people from around the world are currently experiencing very different childhoods. Some are living in abject poverty, lacking basic food and sanitation, while others are more fortunate by being born in a country where those things are guaranteed and usually taken for granted. When photographer James Mollison was asked to come up with an idea for engaging with children’s rights, he found himself thinking of his bedroom: how significant it was during his childhood, and how it reflected what he had and who he was. And with that, he made it his mission to create Where Children Sleep – a collection of stories about children from around the world, told through portraits and pictures of their bedrooms. Bilal, 6, Wadi Abu Hindi, The West Bank

Nature Knows: Amazing macro-photography of individual snowflakes [10 Pictures] Photographer Alexey Kljatov takes incredible close-up photos of snowflakes in his backyard in Moscow. "I capture snowflakes on the open balcony of my house, mostly on glass surface, lighted by an LED flashlight from the opposite side of the glass, and sometimes in natural light, using dark woolen fabrics as background." Source: National Geographic Photo Contest 2011 - In Focus National Geographic is currently holding its annual photo contest, with the deadline for submissions coming up on November 30. For the past nine weeks, the society has been gathering and presenting galleries of submissions, encouraging readers to vote for them as well. National Geographic was kind enough to let me choose among its entries from 2011 for display here on In Focus.

24 Touching photos that will grab you by the Heart..And Never let go. Tissues Require - Webmaster Forum 1. When this girl got the most incredible surprise proposal 2. When Lucas Hembree and his service dog Juno shared a hug Friday Inspiration #48 This is the Original Friday Inspiration series - amazing things that we handpicked to inspire you to greatness. You have a full weekend ahead, so use it wisely and don’t waste your days of rest on resting! First of all thanks for all your suggestions.

Aww...These 15 People Were SO Close Never give up on your dreams, guys. Well, maybe give up sometimes. Source: rebloggy