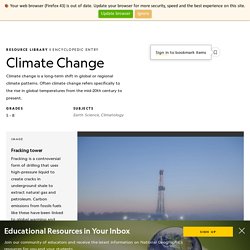 But climate is different from weather because it is measured over a long period of time, whereas weather can change from day to day, or from year to year. Climate change. Causes, Effects, & Facts. Causes of climate change. Humans are increasingly influencing the climate and the earth's temperature by burning fossil fuels, cutting down rainforests and farming livestock. 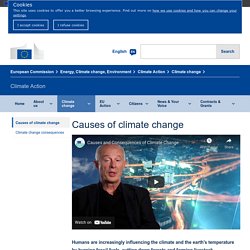 This adds enormous amounts of greenhouse gases to those naturally occurring in the atmosphere, increasing the greenhouse effect and global warming. Greenhouse gases Some gases in the Earth's atmosphere act a bit like the glass in a greenhouse, trapping the sun's heat and stopping it from leaking back into space. Global Climate Change: What You Need to Know. Record floods. 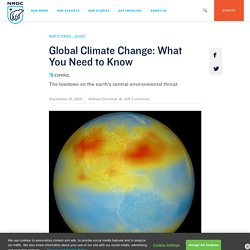 Raging storms. Short Answers to Hard Questions About Climate Change. 3. Is there anything I can do about climate change? Fly less, drive less, waste less. You can reduce your own carbon footprint in lots of simple ways, and most of them will save you money. You can plug leaks in your home insulation to save power, install a smart thermostat, switch to more efficient light bulbs, turn off the lights in any room where you are not using them, drive fewer miles by consolidating trips or taking public transit, waste less food and eat less meat. Perhaps the biggest single thing individuals can do on their own is to take fewer airplane trips; just one or two fewer plane rides per year can save as much in emissions as all the other actions combined. If you want to offset your emissions, you can buy certificates, with the money going to projects that protect forests, capture greenhouse gases and so forth. Leading companies are also starting to demand clean energy for their operations.

Climate change : How do we know ? › en español Earth's climate has changed throughout history. Just in the last 650,000 years there have been seven cycles of glacial advance and retreat, with the abrupt end of the last ice age about 11,700 years ago marking the beginning of the modern climate era — and of human civilization. Most of these climate changes are attributed to very small variations in Earth’s orbit that change the amount of solar energy our planet receives. Global warming and climate change effects: information and facts. The signs of global warming are everywhere, and are more complex than just climbing temperatures. Video Player is loading. Current Time 0:00 Duration 2:49 Remaining Time -2:49. How Climate Change Is Upending Life Around the World. Animals Affected by Climate Change. A History of Global Warming, in Just 35 Seconds. Last year, there was the temperature spiral. 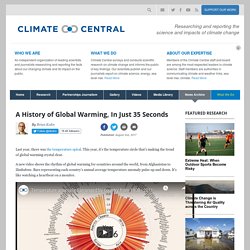 This year, it’s the temperature circle that’s making the trend of global warming crystal clear. A new video shows the rhythm of global warming for countries around the world, from Afghanistan to Zimbabwe. Bars representing each country’s annual average temperature anomaly pulse up and down. It's like watching a heartbeat on a monitor. Rather than staying steady like a normal heartbeat, it’s clear that temperatures for more than 100 countries are climbing ever higher on the back of increasing carbon pollution. “There are no single countries that clearly stand out from the graph,” said Antti Lipponen, a physicist at the Finnish Meteorological Institute who made the graphic. While the temperature spiral showed the global average temperature, Lipponen’s animation uses NASA data to show individual countries separated by regions. Flood Maps. The animals that will survive climate change - BBC Future.

And, of course, there is an alternative: we humans could get our acts together and stop the climate crisis from continuing to snowball by adopting policies and lifestyles that reduce greenhouse gases. 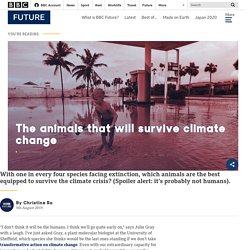 But for the purposes of these projections, we’re assuming that’s not going to happen. Tenacious trends Even with the uncertainties, we can make some educated guesses about broad patterns. Heat tolerant and drought resistant plants, like those found in deserts rather than rainforests, are more likely to survive. So are plants whose seeds can be dispersed over long distances, for instance by wind or ocean currents (like coconuts), rather than by ants (like some acacias).

We also can look to history as a guide. Climate Change. Climate Change - United Nations Sustainable Development. 2019 was the second warmest year on record and the end of the warmest decade (2010- 2019) ever recorded. Carbon dioxide (CO2) levels and other greenhouse gases in the atmosphere rose to new records in 2019. Climate change is affecting every country on every continent. It is disrupting national economies and affecting lives. Weather patterns are changing, sea levels are rising, and weather events are becoming more extreme. Although greenhouse gas emissions are projected to drop about 6 per cent in 2020 due to travel bans and economic slowdowns resulting from the COVID-19 pandemic, this improvement is only temporary. National Climate Assessment Resources. The National Climate Assessment offers a wealth of actionable science about the causes, effects, risks and possible responses to human-caused climate change. 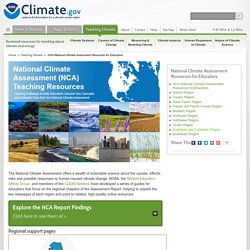 NOAA, the NCAnet Education Affinity Group, and members of the CLEAN Network have developed a series of guides for educators that focus on the regional chapters of the Assessment Report, helping to unpack the key messages of each region and point to related, high-quality online resources. Explore the NCA Report Findings Click here to see them all » Report Finding 1: Global climate is changing and this is apparent across the United States in a wide range of observations. The global warming of the past 50 years is primarily due to human activities, predominantly the burning of fossil fuels. Regional support pages Overview support pages. Teach About Climate Change With These 24 New York Times Graphs. NOTE: Join us for our free webinar about teaching with graphs from The New York Times.

Date: Wednesday, March 20 at 4 p.m. Eastern Time. Register here. Climate change is a gradual process. If you simply measure air temperature, atmospheric carbon dioxide or sea-ice thickness in any given year, you won’t be able to see the full picture of how the planet’s weather patterns are changing. In this teaching resource, we have gathered 24 graphs previously published elsewhere in The New York Times that relate to climate change. Each week in “What’s Going On in This Graph?