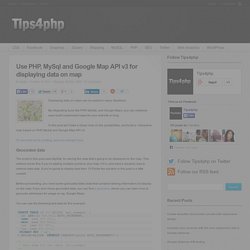 By integrating tools like PHP, MySQL and Google Maps, you can relatively easy build customized maps for your website or blog. In this post we’ll take a closer look on the possibilities, and build a interactive map based on PHP, MySql and Google Map API v3. To see what we’re building, see live example here. Hash_pbkdf2. How to create a multi-submit form. Php - Submit Multiple Forms With One Button. DownPicker: A lightweight DropDownList / ComboBox for iOS written in Objective-C - Ryadel. Quick links: Project Page – GitHub Eventually, while developing in iOS, you’re going to find yourself looking for a control allowing the user to pick an option from a drop-down, selectable list of items: any UI has something like that: drop down lists, combo boxes, expand & collapse views or anything that could resemble the behaviour of an HTML <select> element. 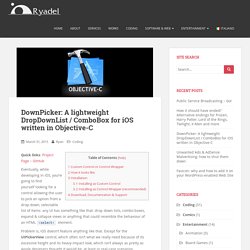 Problem is, iOS doesn’t feature anything like that. Except for the UIPickerView control, which often isn’t what we really need because of its excessive height and its heavy-impact look, which isn’t always as pretty as Apple designers thought it would be, at least in real-case scenarios. Conversely, we often need it to be simpler, taking less space and/or decently blending with other TextField elements. 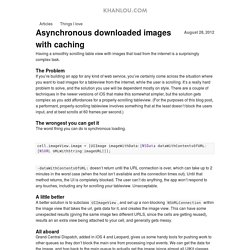 The Problem If you’re building an app for any kind of web service, you’ve certainly come across the situation where you want to load images for a tableview from the internet, while the user is scrolling. It’s a really hard problem to solve, and the solution you use will be dependent mostly on style. Loading Images Asynchronously on iPhone using NSInvocationOperation - Tech.pro. DownPicker: A lightweight DropDownList / ComboBox for iOS written in Objective-C - Ryadel. How to use Pickerview with Uitextfield for input data in IOS - MyCodeTips.

At work recently I faced with the task of creating an interface were a two uipickerview would control the value input for different field .I decided that the interface would be better if for those fields that used a uipickerview it would appear when the user clicked into the textfield. 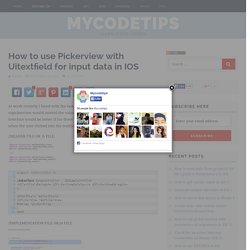 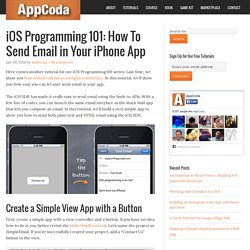 Last time, we show you how to hide tab bar in navigation interface. In this tutorial, we’ll show you how easy you can let user send email in your app. The iOS SDK has made it really easy to send email using the built-in APIs. With a few line of codes, you can launch the same email interface as the stock Mail app that lets you compose an email. Motion tracker. Message. Email backgroud. Encryption ios. Location ios. Current location iOS.

Refresh table view. Objective C trick. How to add .pch or Prefix.pch file in Xcode 6? What is .pch file? 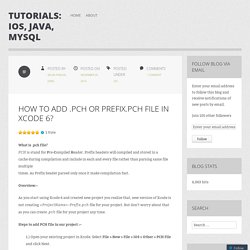 PCH is stand for Pre-Compiled Header. Prefix headers will compiled and stored in a cache during compilation and include in each and every file rather than parsing same file multiple times. As Prefix header parsed only once it make compilation fast. Overview:~ As you start using Xcode 6 and created new project you realize that, new version of Xcode is not creating <ProjectName>-Prefix.pch file for your project. Website objective c. Image hurry. Ios - parse JSON string into array of objects Objective C. 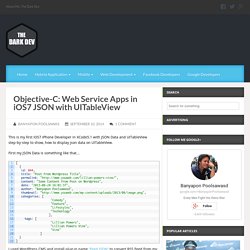 First my JSON Data is something like that… I used WordPress CMS and install plug-in name “Feed JSON” to convert RSS Feed from my blog to a new type of feed you can subscribe to. Example or to anywhere you get a JSON form. First open Xcode5 and create New iPhone developer‘s Project in Single View Application and choose you project name Create Single View Application Create your Bundle Name As you confirm, Xcode automatically creates the “JSONView” project based on the options you’ve provided. Goto MainStoryBoard from project solution tree on you left side and drag UITableView object, paste it on ViewController. drag UITableView object, paste it on ViewController.

Press and hold the Control key on your keyboard, select the Table View and drag to the “File’s Owner”. Insert one prototype cell on your UITableView Chang this code below:

Encrpytion. Scroll view. Touch ID. Developing on jailbroken iPhone 4S (5.1.1) with... First of all, the intent of this post is not to discourage iOS developers from creating a $99/yr developer account. 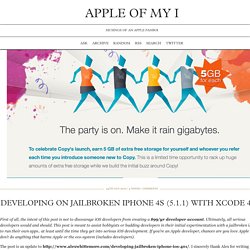 Ultimately, all serious developers would and should. This post is meant to assist hobbyists or budding developers in their initial experimentation with a jailbroken iPhone to run their own apps.. at least until the time they get into serious iOS development. If you’re an Apple developer, chances are you love Apple and so, don’t do anything that harms Apple or the eco-system (includes developers). The post is an update to I sincerely thank Alex for writing a detailed post that helped me in successfully running my test apps, developed under Xcode 4.4.1 on Mountain Lion with my iPhone 4S (5.1.1).

As I discovered, there were a few (minor) changes required for 5.1.1 on Xcode 4.4.1 since the original post was targeted at an older version of iOS (4.x) and Xcode. Essentially, there are 10 broad steps to accomplish this task. Well, that’s it. 槟城旅游小介绍（新手版） - NextTrip.my. 槟城作为马来西亚出名的旅游胜地，并以其独有的文化气息、旅游景点、历史古迹及美食等而闻名全球。 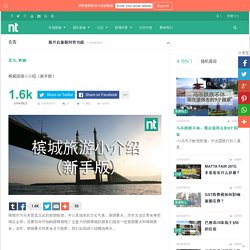 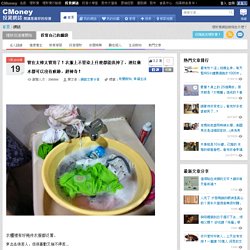 ARM Processors: Condition Codes 1: Condition Fl... Every practical general-purpose computing architecture has a mechanism of conditionally executing some code. Such mechanisms are used to implement the if construct in C, for example, in addition to several other cases that are less obvious. ARM, like many other architectures, implements conditional execution using a set of flags which store state information about a previous operation. I intend, in this post, to shed some light on the operation of these flags. Of course, the Architecture Reference Manual is the definitive source of information, so if you need to know about a specific corner-case that I do not cover here, that is where you need to look. A Realistic Example.

You hardly think about the work that goes into building a form, but if you own a site, service or product, the form is an important tool to have when you are gathering crowd intelligence. Online forms are not really that hard to make, but if you want to build a nice-looking, functional form, yet don’t want to get your hands dirty with the codes, you’ve come to the right post. Regardless of whether you need forms for feedback, login, payment or for communication purposes, there are plenty of HTML form builders out there that can generate these forms for you in a few simple clicks.

They are easy to use, customizable, effective and best of all, they are free. Here are our 5 favorite HTML form builders. PHP Login Form with Sessions. Session variables are used to store individual client’s information on web server for later use, as web server does not know which client’s request to be respond because, HTTP address does not maintained state. NSJSONSerialization. In this article I present an effective way to call a webservice method from an iOS device. Input and output are encoded to and decoded from a widely used format: JSON.