It's all in the mind. Cryptozoology & mythology. Humanities. Spirituality. The Egyptian God Family Tree – Veritable Hokum. First: I opened a store! 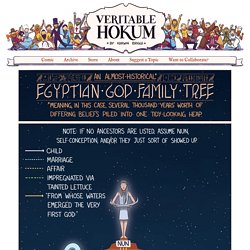 It has a poster of this, as well as updated versions of the Norse and Greek god family trees I did a while back. More to come soon. Next, a disclaimer: this family tree isn’t, strictly speaking, historically accurate, because what we think of as The Egyptian Pantheon is really a whole bunch of similar-but-not-identical pantheons which were mostly based in individual cities – Thebes, Heliopolis, Memphis, etc. – and went through a lot of changes over their 3000+ year history. It’s as nice a chart as I could make after smooshing together a bunch of those similar-but-not-identical pantheons into one image, but it also contains at least a half-dozen gods who were in charge of their own version of this pantheon, and a bunch of others who could be related to each other in totally different ways depending on when and where you asked.

And now that I’ve disclaimed historical responsibility, onto What I Know About Those Gods Up There: Nun Apep Aten Ra Atum Amun Mut Hathor Sekhmet Shu. The Q'ero Energy System. After reading the Joan Parisi Wilcox's Masters of the Living Energy: The Mystical World of the Q'ero in Peru, I felt inspired to pictorally represent the energy system of the human body as depicted by the Q'ero. 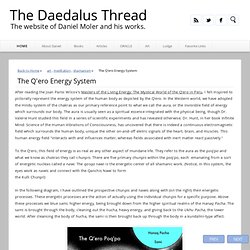 In the Western world, we have adopted the Hindu system of the chakras as our primary reference point to what we call the aura, or the invisisble field of energy which surrounds our body. The aura is usually seen as a spiritual essence integrated with the physical being, though Dr. Valerie Hunt studied this field in a series of scientific experiments and has revealed otherwise. Dr. Hunt, in her book Infinite Mind: Science of the Human Vibrations of Consciousness, has uncovered that there is indeed a continuous electromagnetic field which surrounds the human body, unique the other on-and-off eletric signals of the heart, brain, and muscles.

To the Q'ero, this field of energy is as real as any other aspect of mundane life. Inner Speech Speaks Volumes About the Brain. A new study shows that a predictive brain signal could explain why we ‘hear’ inner speech in our heads even in the absence of actual sound. 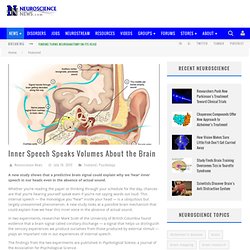 Whether you’re reading the paper or thinking through your schedule for the day, chances are that you’re hearing yourself speak even if you’re not saying words out loud. This internal speech — the monologue you “hear” inside your head — is a ubiquitous but largely unexamined phenomenon. A new study looks at a possible brain mechanism that could explain how we hear this inner voice in the absence of actual sound.

In two experiments, researcher Mark Scott of the University of British Columbia found evidence that a brain signal called corollary discharge — a signal that helps us distinguish the sensory experiences we produce ourselves from those produced by external stimuli — plays an important role in our experiences of internal speech. And the same mechanism plays a role in how our auditory system processes speech. A beginner's guide to sex differences in the brain. Asking whether there are sex differences in the human brain is a bit like asking whether coffee is good for you – scientists can’t seem to make up their minds about the answer. 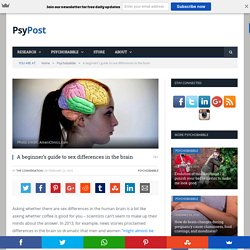