Beyond 'colourblindness' and racebending - Right Now. The American Exception in the Coronavirus Crisis. Well, maybe not the whole, unvarnished truth. 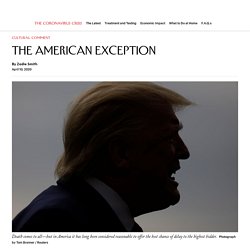 The first clause was neither true nor false: it described only a desire. Thanks to music and art, I found more hope than grief in lockdown. What did you spend lockdown doing? 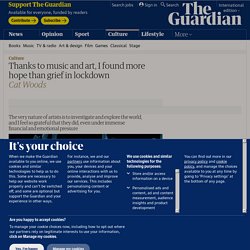 If it was anything like my lockdown, it involved live-streaming DJs, bands and theatre and live, intimate performances by solo musicians from their bedrooms. I’ve caught up on a lot of books I might otherwise have claimed I was too busy to read. So it’s thanks to art and artists that I’ve found more reason for hope and excitement the past few months than I have found reasons for grief. What US democracy can learn from ancient Greek philosophy. When president-elect Joe Biden addressed Americans on 7 November, many listened with palpable nostalgia and relief. 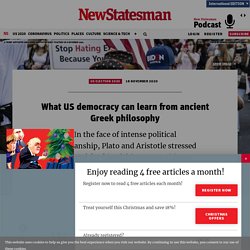 Like Barack Obama before him, here was a politician promising “not to divide, but to unify” and claiming he “doesn’t see Red and Blue states, but a United States”. Biden even went so far as to console those Americans who voted for the other guy, and pledged to be their president, too. Revisiting John Rawls’s A Theory of Justice. For three decades after the publication of his first and greatest book, A Theory of Justice, in 1971, John Rawls set a benchmark for political philosophy. 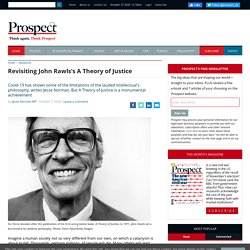 Photo: Steve Pyke/Getty Images Imagine a human society not so very different from our own, on which a cataclysm is about to fall. Thousands, perhaps millions, of people will die. Many others will lead shorter and less happy lives; the financial and human costs will be felt for decades, if not forever. Looking in from the outside, and thinking in terms of big ideas such as equality, justice, fairness, human rights and the rule of law, what kind of society would you want to emerge from this catastrophe? Covid-19 has thrown these fundamental questions of political philosophy into stark relief. NPR Choice page. Contest of Words.

Although high school debate is often considered the thinking person’s—the nerd’s—alternative to sports, my memories of it are primarily somatic: the starched collar of the dress shirt against my recently shaved neck, small cuts and razor bumps deepening the sensation; the constant gentle pressure of the tie; how my gait and posture adjusted under the direction of the suit; the way the slacks always felt high and tight because I normally let my baggy jeans sag to whatever level we white midwestern adolescents had tacitly established as our norm. 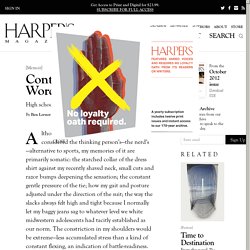 The constriction in my shoulders would be extreme—less accumulated stress than a kind of constant flexing, an indication of battle-readiness. The Overwhelming Racism Of COVID Coverage. A World of Trouble: Jessica Krug and the Ethos of Historians. While I am teaching online this semester, I started my classes as I always do: with an introductory lecture / discussion about history as a scholarly discipline. 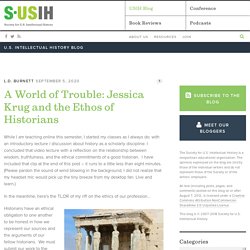 I concluded that video lecture with a reflection on the relationship between wisdom, truthfulness, and the ethical commitments of a good historian. I have included that clip at the end of this post – it runs to a little less than eight minutes. (Please pardon the sound of wind blowing in the background; I did not realize that my headset mic would pick up the tiny breeze from my desktop fan.

Live and learn.) The Wound of Multilingualism: On Surrendering the Languages of Home. That morning in London in the early 1990s, I was on my way to a college in Kilburn to start my English course. 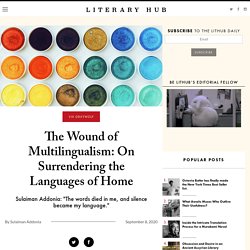 To belong in a country you have to know its language first. On Repetition As a Powerful Literary Tool. But then they danced down the streets like dingledodies, and I shambled after as I’ve been doing all my life after people who interest me, because the only people for me are the mad ones, the ones who are mad to live, mad to talk, mad to be saved, desirous of everything at the same time, the ones who never yawn or say a commonplace thing, but burn, burn, burn like fabulous yellow roman candles exploding like spiders across the stars and in the middle you see the blue centerlight pop and everybody goes “Awww!” 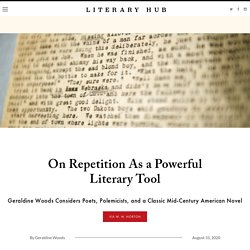 The trouble with poetry and literary awards. Australia has a strong history of poetry, albeit largely white and male. 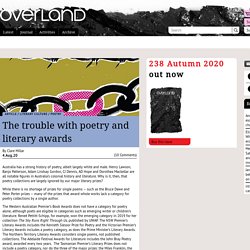 Henry Lawson, Banjo Patterson, Adam Lindsay Gordon, CJ Dennis, AD Hope and Dorothea Mackellar are all notable figures in Australia’s colonial history and literature. Why is it, then, that poetry collections are largely ignored by our major literary prizes? While there is no shortage of prizes for single poems – such as the Bruce Dawe and Peter Porter prizes – many of the prizes that award whole works lack a category for poetry collections by a single author.

The Western Australian Premier’s Book Awards does not have a category for poetry alone, although poets are eligible in categories such as emerging writer or children’s literature. Friday essay: the literary canon is exhilarating and disturbing and we need to read it. The Age of Criticism, Martin Amis once wrote, started in 1948 and ended with OPEC. 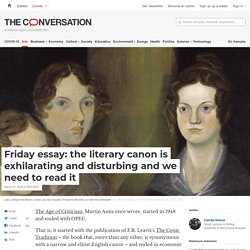 That is, it started with the publication of F.R. Quarterly Essay 72 Net Loss: The Inner Life in the Digital Age - Sebastian Smee. Fable by William Golding.pdf. The “Unmasking” of Elena Ferrante. The news that the true identity of the writer Elena Ferrante has, allegedly, been uncovered was published on the blog of The New York Review of Books at 1 A.M. on Sunday—the Internet’s witching hour, when salacious tidbits are unloaded online to greet the unsuspecting citizens of Twitter bright and early in the morning.

It was met with widespread consternation from Ferrante fans. People are pissed. - The Washington Post. Text Publishing — Better Than Three Percent—Translating New Voices, by. English-language publishers have a poor track record when it comes to translating books. The website Three Percent, launched in 2007, took its name from the fact that translated books amounted to a mere 3% of all books published in the US. But when I look at publishers’ lists from Europe, Asia, South America and Scandinavia, where they publish vast amounts of literature in translation, it is always a shock to be reminded just how Anglocentric the global penetration of English has made us—and the UK and the US—in our reading and publishing habits.

The Monument Wars, by Rebecca Solnit. For years, whenever I was in New Orleans, I used to run past an equestrian statue just outside the voluptuously green City Park. Though it is situated at a major intersection, where Esplanade Avenue meets Wisner Boulevard, the statue itself is unremarkable, the usual muscular horse and male rider. It celebrates Pierre Gustave Toutant Beauregard, the general whose assault on Fort Sumter in April 1861 launched the Civil War.

Beneath the horse’s raised foreleg, a plaque commemorates the four years that Beauregard served in the Confederate Army; it says nothing about his decades in the U.S. Wieseltier, Halperin, Weinstein: Powerful, Lecherous Men. Clockwise from bottom left: Bill O’Reilly, Leon Wieseltier, Mark Halperin, and John Besh. Photo: Brooks Kraft LLC/Corbis via Getty Images, Maarten de Boer/Getty Images, Chance Yeh/Getty Images, Randy Holmes/ABC via Getty Images And the stories keep on coming: about how political pundit Mark Halperin rubbed his erect penis against younger female colleagues (a claim he denies); how Artforum co-publisher Knight Landesman touched young female employees against their will and told one of them that she needed to be “more open to physical contact to succeed”; how Amazon Studios head Roy Price propositioned a producer, assuring her, “You will love my dick”; about New Orleans restaurateur John Besh, whose organization is alleged to have been a hotbed of harassment; about Ben Affleck, who groped women in public; about New Republic literary editor Leon Wieseltier, who’s reported to have thanked a young colleague for wearing a miniskirt to work.

To Break the Story, You Must Break the Status Quo. A Hotel is a Plot. Mother Tongue by Amy Tan. Beware of feminism lite. Sacha Vega/iStock A few years ago, Nigerian writer Chimamanda Ngozi Adichie received a letter from a childhood friend and new mother, asking her how she could raise her baby girl to be a feminist. Adichie’s new book, Dear Iljeawele, is her response, and it contains 15 suggestions for how to empower a daughter to become a strong, independent woman. Rebecca Solnit: Our Words Are Our Weapons. Image from Flickr via Joel Ericsen. Is 'Irregardless' a Real Word? The Informed Imagination. What Happens When You Tell Somebody Else's Story? Sedgwick paranoid reading. Are We Postcritical? I FIRST ENCOUNTERED what literary critics call “literary theory,” “critical theory,” or just plain “theory” in a class titled “Contemporary Literary Theory” taught by what must have been the world’s most patient professor.

Each week we studied a different approach to reading, moving from formalism to structuralism to Marxism to feminism to deconstruction to postcolonialism and beyond. Every new theory presented itself as the true method of interpretation, the one that would lead me through the smoke screens and false fronts that obscured the meanings of works of literature, or what I learned to call “texts.” Understand what you read.

Rewordify.com simplifies difficult English. Lying in Politics: Hannah Arendt on Deception, Self-Deception, and the Psychology of Defactualization. ‘American Dirt’ Book Controversy, Explained. American Dirt was released on January 21, 2020. Photo: Vulture On January 21, Oprah Winfrey announced her latest Oprah’s Book Club pick, the new novel American Dirt by Jeanine Cummins. Winfrey tweeted: “From the first sentence, I was IN … Like so many of us, I’ve read newspaper articles and watched television news stories and seen movies about the plight of families looking for a better life, but this story changed the way I see what it means to be a migrant in a whole new way.”

This is not a critique. This is a condemnation. Caliban Never Belonged to Shakespeare. NPR Choice page. Words that Wound: Understanding the Authority of Hate Speech – Opinion – ABC Religion & Ethics (Australian Broadcasting Corporation) How to do nothing – Jenny Odell. Have Smartphones Destroyed a Generation? What Kind of Country Do We Want? Newstatesman. Is Covid-19 lockdown our chance to regain a sense of wonder? Tyrant by Stephen Greenblatt review – Shakespeare, power and sadistic impulses.

If a Shakespeare play is racist or antisemitic, is it OK to change the ending? King Leer. New Ways of Being. Where Millennials Come From. We Are Hopelessly Hooked. Two Paths for the Personal Essay. A Golden Age for Dystopian Fiction. Rethinking the American Dream. Silence, Power and Gender Equality in the Arts. The Power and Purpose of Literature. HarpersMagazine 2001 04 0070913. COVID-19 Lessons for World Leaders From Medieval Literature.