The battery invented 120 years before its time—OR NOT – Watts Up With That? NiFe (aka Edison) Batteries and Renewable False Hopes By Rud Istvan This post was inspired yet again by another Charles email alerting me to a new BBC post. 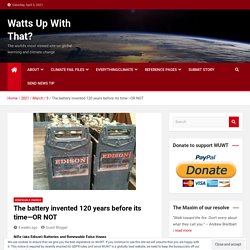 He referred it knowing that I have some expertise in energy storage systems and their related materials. So, I dug around, then called him and said, YUP, another possibly sardonic guest post. So here we go. California secretly struggles with renewables. California has hooked up a grid battery system that is almost ten times bigger than the previous world record holder, but when it comes to making renewables reliable it is so small it might as well not exist. 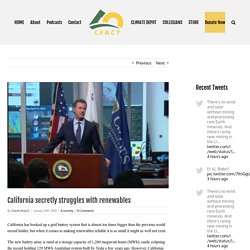 The new battery array is rated at a storage capacity of 1,200 megawatt hours (MWh); easily eclipsing the record holding 129 MWh Australian system built by Tesla a few years ago. However, California peaks at a whopping 42,000 MW. If that happened on a hot, low wind night this supposedly big battery would keep the lights on for just 1.7 minutes (that’s 103 seconds).

ENERGYCAST: Can widespread battery storage be stable? Effective battery storage technology is expensive but would be vital to the future of renewable energy sources, such as sun and wind. 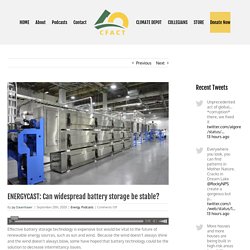 Because the wind doesn’t always shine and the wind doesn’t always blow, some have hoped that battery technology could be the solution to decrease intermittancy issues. Alevo is the world’s first utility-scale storage company. They were founded in 2014 and are based n Concord, NC, just outside of Charlotte. I was confused when I toured their facility, because it was over 2 million square feet. Utility-Scale Battery Costs “Fall” to $625/kWh. Guest “Now that’s funny right there!” 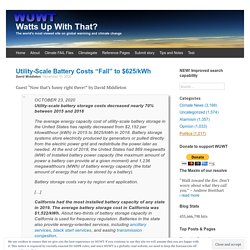 By David Middleton OCTOBER 23, 2020Utility-scale battery storage costs decreased nearly 70% between 2015 and 2018The average energy capacity cost of utility-scale battery storage in the United States has rapidly decreased from $2,152 per kilowatthour (kWh) in 2015 to $625/kWh in 2018. Battery storage systems store electricity produced by generators or pulled directly from the electric power grid and redistribute the power later as needed. At the end of 2018, the United States had 869 megawatts (MW) of installed battery power capacity (the maximum amount of power a battery can provide at a given moment) and 1,236 megawatthours (MWh) of battery energy capacity (the total amount of energy that can be stored by a battery).Battery storage costs vary by region and application.[…]California had the most installed battery capacity of any state in 2019.

Tesla Powerwall Price Has Risen By 36% Since 2017. By Paul Homewood We keep hearing how the price of batteries keeps falling (allowing Gummer to get away with the claim that EVs will soon be as cheap as ICEs). 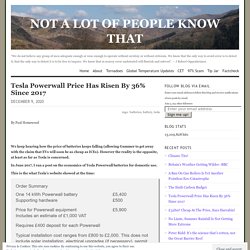 However the reality is the opposite, at least as far as Tesla is concerned. In June 2017, I ran a post on the economics of Tesla Powerwall batteries for domestic use. This is the what Tesla’s website showed at the time: Last year, I thought I would check again: Batteries not a sustainable backup for wind and solar. Governors, Utility, and Industry captains are rushing for the headlines, with each claiming the most, the biggest, the newest solar plants and wind plants with the sexiest battery-backup systems. 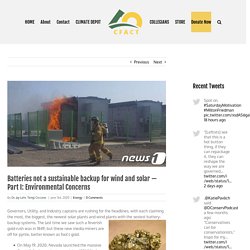 The last time we saw such a feverish gold-rush was in 1849, but these new media-miners are off for pyrite, better known as fool’s gold. On May 19, 2020, Nevada launched the massive Gemini[a] solar project comprising 690MW of solar generation plus a 380MW battery storage facility. Two years earlier, they launched a 1,000MW of solar generation and 100MW of Battery Storage, to be “Carbon neutral by 2025.” [b]Not to be outdone, the next day, PG&E,[c] presently under Chapter 11 resulting from gross mismanagement, launched the acquisition of 720MW battery storage facilities for their existing solar plants. 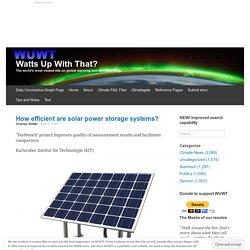 Batteries not a sustainable backup for wind and solar — Part II: Safety, health & cost. Joy and Celebration: In his Laudeat et Jubilat, Mozart gave specific instructions to the conductor; “Allegro ma non troppo,” or play it happily, but not so much. 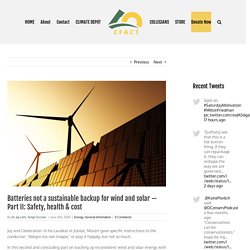 In this second and concluding part on backing up inconsistent wind and solar energy with battery storage, we give these same instructions to the Governors, Utility, and Industry captains. They will joyfully receive the mega-billion dollar contracts for the solar and wind plants. They will be supercharged with storage batteries and they will fail with spectacular short falls, short of tripling customer costs. We also extend this warning signal to the delusional virtue-signaling do-gooders and Sierra Club hypocrites in hiding, who are all well over their ski tips on these misadventures. The government has approved a billion dollar solar energy facility in the Mohave Desert 30 miles from Las Vegas.

For the same cost we estimate for the Gemini Solar plant, Mr. Puff Piece For Tesla Ignores The Real Truth. By Paul Homewood Elon Musk owned Tesla installed a battery farm in South Australia in 2017 and has since helped residents save $116 million in energy costs, Bloomberg reports. 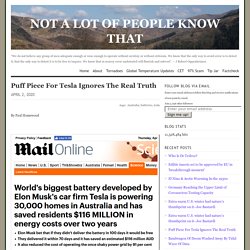 The company installed the world’s biggest lithium-ion batter to help reduce the risk of blackouts as the country moved to renewable power generation. Operating via the Hornsdale Power Reserve, it has helped to restore stability to the network and lower the costs of running the power grid, according to reports. Shell’s New Battery Won’t Solve Wind Intermittency Problem. AEP’s Energy Storage Delusions. By Paul Homewood h/t AC Osborn/Patsy Lacey AEP gives yet another plug for Highview Power’s cryogenic energy storage system. 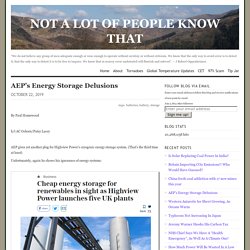 (That’s the third time at least) Unfortunately, again he shows his ignorance of energy systems: The article is behind the Telegraph paywall, but AEP claims the technology could help plug the intermittency gap as the UK doubles down on its new role as world leader in offshore wind power, and compares the costs of it favourable against small scale peakers. However, what he misses is that peakers and conventional storage systems only operate for a few hours a year, to cope with spikes in demand and sudden fluctuations in supply. They are not designed to supply power for days and weeks on end, when wind output is low. If he had bothered to check Highview’s own website, he would have known this, as they talk about balancing services: Note also, the £8m coughed up by taxpayers!

Yet AEP claims: I suggest he goes away and does some sums. AEP’s Latest Flight Of Fancy–Cryogenic Air! By Paul Homewood AEP makes a fool of himself yet again, with a naive article about energy storage that would Jillian Ambrose might have written! It is paywalled, so the DT won’t let me publish in full, but I have summarised the gist: Battery Storage – An Infinitesimally Small Part of Electrical Power. Guest essay by Steve Goreham Large-scale storage of electricity is the latest proposed solution to boost the deployment of renewables. Renewable energy advocates, businesses, and state governments plan to use batteries to store electricity to solve the problem of intermittent wind and solar output.

But large-scale storage is only an insignificant part of the electrical power industry and doomed to remain so for decades to come. Last month, Senator Susan Collins of Maine introduced a bi-partisan bill named “The Better Energy Storage Technology Act,” proposing to spend $300 million to promote the development of battery solutions for electrical power. Collins stated, “Next-generation energy storage devices will help enhance the efficiency and reliability of our electric grid, reduce energy costs, and promote the adoption of renewable resources.” Today, 29 states have renewable portfolio standards laws, requiring utilities to purchase increasing amounts of renewable energy.

Challenging Battery Investment Myths. By Paul Homewood Timera Energy have an interesting post up on battery storage: Battery storage flexibility is a key building block of a decarbonised power sector.’ This statement is not a myth. In fact it is almost a truism. UN Greens endorse gigantic global use of chemical energy - CFACT. In what may be the grandest case of unintended consequences in history, the chemical hating UN greens have endorsed the creation and use of toxic chemicals and hazardous materials on a truly gigantic scale. It is all about batteries. The green-driven UN is proposing that we rapidly replace the world’s fossil fueled energy with renewables.

Apparently these folks are not aware that it takes a world of batteries to do this. In fact most of the electricity that people use will not be renewable energy; rather it will be chemical energy. Here is how Bloomberg describes the UN proposal: “The world must invest $2.4 trillion in clean energy every year through 2035 and cut the use of coal-fired power to almost nothing by 2050 to avoid catastrophic damage from climate change, according to scientists convened by the United Nations.”

Grid Scale Energy Storage Systems - Fusion 4 Freedom. By Barrie Lawson, UK The electricity grid was built in days when electricity could not be economically stored in large quantities and it had to be produced the instant it was needed and consumed just as quickly as it was produced. Can Grid-Scale Storage Solve The Intermittency Problem?

Tesla Powerpack Prices Rise By 16% Since 2017. The $2.5 trillion reason we can’t rely on batteries to clean up the grid. A pair of 500-foot smokestacks rise from a natural-gas power plant on the harbor of Moss Landing, California, casting an industrial pall over the pretty seaside town. If state regulators sign off, however, it could be the site of the world’s largest lithium-ion battery project by late 2020, helping to balance fluctuating wind and solar energy on the California grid. The 300-megawatt facility is one of four giant lithium-ion storage projects that Pacific Gas and Electric, California’s largest utility, asked the California Public Utilities Commission to approve in late June.