Metacognition: The Gift That Keeps Giving 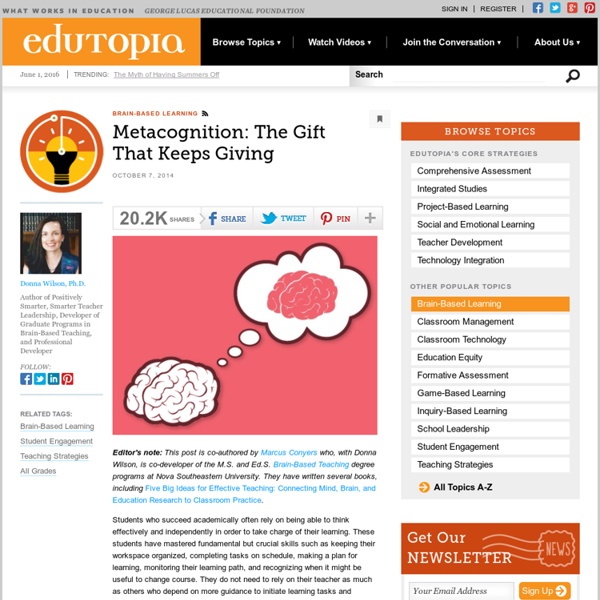 Editor's note: This post is co-authored by Marcus Conyers who, with Donna Wilson, is co-developer of the M.S. and Ed.S. Brain-Based Teaching degree programs at Nova Southeastern University. They have written several books, including Five Big Ideas for Effective Teaching: Connecting Mind, Brain, and Education Research to Classroom Practice. Students who succeed academically often rely on being able to think effectively and independently in order to take charge of their learning. These students have mastered fundamental but crucial skills such as keeping their workspace organized, completing tasks on schedule, making a plan for learning, monitoring their learning path, and recognizing when it might be useful to change course. They do not need to rely on their teacher as much as others who depend on more guidance to initiate learning tasks and monitor their progress. Metacognition in the Brain How to Teach Students to Be More Metacognitive Reference Stephen M. For Further Reading Related:  Wisdom • Applications pédagogiques • Brain research

The Problem with the Data-Information-Knowledge-Wisdom Hierarchy - David Weinberger by David Weinberger | 9:00 AM February 2, 2010 The data-information-knowledge-wisdom hierarchy seemed like a really great idea when it was first proposed. But its rapid acceptance was in fact a sign of how worried we were about the real value of the information systems we had built at such great expense. What looks like a logical progression is actually a desperate cry for help. The DIKW hierarchy (as it came to be known) was brought to prominence by Russell Ackoff in his address accepting the presidency of the International Society for General Systems Research in 1989. But the actual first recorded instance of it was in 1934: Where is the Life we have lost in living? Those lines come from the poem “The Rock” by T.S. The DIKW sequence made immediate sense because it extends what every Computer Science 101 class learns: information is a refinement of mere data. But, the info-to-knowledge move is far more problematic than the data-to-info one. So, what is “knowledge” in the DIKW pyramid?

Engaging Brains: How to Enhance Learning by Teaching Kids About Neuroplasticity Editor's note: This post is co-authored by Marcus Conyers who, with Donna Wilson, is co-developer of the M.S. and Ed.S. Brain-Based Teaching degree programs at Nova Southeastern University. They have written several books, including Five Big Ideas for Effective Teaching: Connecting Mind, Brain, and Education Research to Classroom Practice. Enhancing Student Commitment Explicitly teaching students about neuroplasticity can have a transformative impact in the classroom. Lessons on discoveries that learning changes the structure and function of the brain can engage students, especially when combined with explicit instruction on the use of cognitive and metacognitive strategies that guide them to learn how to learn (Wilson & Conyers, 2013). The force behind this cycle is students' belief that they can get smarter through study and practice, which enhances their commitment to persist in the hard work that learning sometimes requires. Strategies for Engagement License to Drive Going BIG Notes

The Science of Fear What are you afraid of? Snakes? Turbulence? Spiders? All of us get scared, and all of us have different thresholds for what makes us afraid. Whatever it is that scares you, what we can agree on is that fear causes our bodies to react. Well, if you are experiencing these symptoms, you have your amygdala to thank. Consider the amygdala as your own onboard 911 operator. We can learn quite a lot from animals about how we respond when we are frightened. Parts of Our Body's Fear System Amygdala: scans for threats and signals body to respond Brain Stem: triggers the freeze response Hippocampus: turns on the fight-or-flight response Hypothalamus: signals the adrenal glands to pump hormones Pre-Frontal Cortex: interprets the event and compares it to past experiences Thalamus: receives input from the senses and "decides" to send information to either the sensory cortex (conscious fear) or the amygdala (defense mechanism) Your Amygdala at Work: A STEM Activity Fear and Learning Don't Mix Oil and water.

How stress affects your brain - Madhumita Murgia To learn about some of the most seminal experiments that show how stress changes your brain, read this interesting story in Psychology Today. This interactive explains how mom rats impact the adult personalities of their pups, based on how much they lick them. You get to be a rat mom yourself, to see how you've changed your pup's genes! Watch this TED Talk about how we are thinking about stress all wrong: believing stress is bad for you may actually be worse than the stress itself! This cool Radiolab podcast explores the science of stress, including coping strategies seen all around the animal kingdom.

Addressing Our Needs: Maslow Comes to Life for Educators and Students In the mid-1950s, humanistic psychologist Abraham Maslow created a theory of basic, psychological and self-fulfillment needs that motivate individuals to move consciously or subconsciously through levels or tiers based on our inner and outer satisfaction of those met or unmet needs. As a parent and educator, I find this theory eternally relevant for students and adults, especially in our classrooms. After studying it over the past couple of years, my graduate and undergraduate students have decided that every classroom should display a wall-sized diagram of the pyramid, as students and teachers alike place pins and post-its on the varying tiers based on their own feelings, behaviors and needs. What do actual brain-compatible strategies look like on this pyramid? Tier One Meeting Physiological Needs in the Classroom These elements contribute to brain-compatible learning by creating a physical environment that is inviting, warm and friendly! Questions to Ask Myself What do I need? Tier Two

The Nightmare Is Over: Researchers Discover the Switch for REM Sleep University of California scientists have found a powerful on-off "switch" that sends dozing mice into a full-fledged, eye-twitching, cheese-chasing mousy dreamworld. Sleep is one of those funny things about being a human being -- you just have to do it. Have you ever wondered why? Check out our HowStuffWorks article to learn more about the importance of sleep. That "switch" seems to be a particular group of neurons in the brain that, when stimulated in sleeping mice, immediately pushes the rodents into REM sleep. "It was already known for many decades, the neurons necessary for REM sleep. There are other regions in the brain that relate to REM sleep. But what Weber, lead author Yang Dan and their team showed was that the region and the group of neurons they were exploring were not just "into" that part of REM. When they flipped their "switch" — done by an optical device that triggered certain neurons — 94 percent of the test mice fell deeply into REM sleep almost immediately.

Magic and Mystery, Chaos and Complexity Paradox My dictionary says a paradox is a seemingly absurd or contradictory statement even if it is well founded. In life there are many things that appear absurd and contradictory that are in fact real and true. These paradoxes mean we live in a world of mystery where there is always something new to learn and experience. Every question answered opens up a new question to be solved. Tonight I will talk about some of those paradoxes and how they might help us understand the world we live in. The first paradox is that we have two competing needs in life beyond our needs for mere survival. The second need we have is to be accepted by other people. So, one dancing partner is our need to belong; to feel accepted and connected. There is no unity without sacrifice. The other dancing partner is our need to be a unique individual. Just as dancers need to be balanced with one another. The extremes of only co-operating or only competing do not work. There is no diversity without inequality.

The Neuroscience Behind Stress and Learning The realities of standardized tests and increasingly structured, if not synchronized, curriculum continue to build classroom stress levels. Neuroimaging research reveals the disturbances in the brain's learning circuits and neurotransmitters that accompany stressful learning environments. The neuroscientific research about learning has revealed the negative impact of stress and anxiety and the qualitative improvement of the brain circuitry involved in memory and executive function that accompanies positive motivation and engagement. The Proven Effects of Positive Motivation Thankfully, this information has led to the development of brain-compatible strategies to help students through the bleak terrain created by some of the current trends imposed by the Common Core State Standards and similar mandates. With brain-based teaching strategies that reduce classroom anxiety and increase student connection to their lessons, educators can help students learn more effectively.