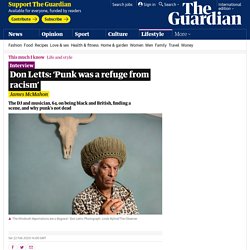 My first musical memory is sitting at home with my dad, listening to incarnations of what would become reggae on his sound system. But as well as Prince Buster, and Toots and the Maytals, my dad loved things like Welcome to My World by Jim Reeves. It was the storytelling he could relate to. I know the exact moment I wanted music to be my life. I was 14 or 15, it was 1971, and I was watching the Who at the Young Vic in London. My parents got a rough deal. The Windrush deportations are a disgrace. Being British and black was a confusing concept for a long time. My career was a let down to my parents. Punk was a refuge from racism. Punk didn’t start and end in the 70s. Que le punk français repose en paix… 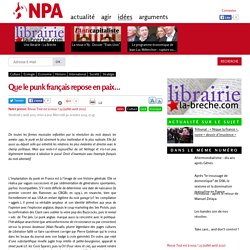 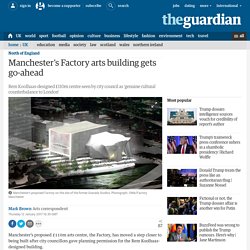 The Factory will be erected on the site of the former Granada Studios and is seen by the city council as a game changer, one which the authority’s leader, Sir Richard Leese, has said would “make Manchester and the wider region a genuine cultural counterbalance to London”. It is a central part of the northern powerhouse project, championed by the former chancellor George Osborne, who pledged £78m of government money in 2014, a sum which was confirmed this week following a Treasury review of the full business case. The enormous and striking glass cube construction will be the first major public building in the UK by Dutch architect Koolhaas and his Office for Metropolitan Architecture (OMA) practice.

The Legacy of Altamont. But Altamont had bad vibes from the beginning. 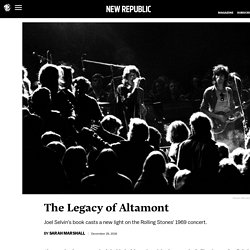 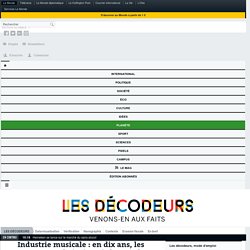 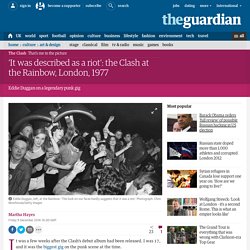 I was 17, and it was the biggest gig on the punk scene at the time. Those were turbulent times, dominated by unemployment and discontent. The Doors: London Fog 1966 review – embryonic sound of stars in the making. Many of the countless Doors live albums are far from essential, but this one feels genuinely important. 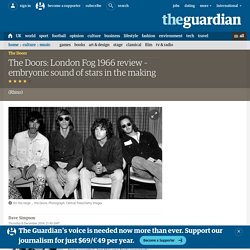 The recently discovered 1966 audience recording from a gig at the Los Angeles club London Fog captures the band in their lesser-known embryonic period. Their sound is already in place and Jim Morrison is on the verge of becoming the Lizard King, using the near-empty Sunset Strip venue to develop the necessary stagecraft to get his mojo rising. EMI may drop the Sex Pistols – archive, 1976. 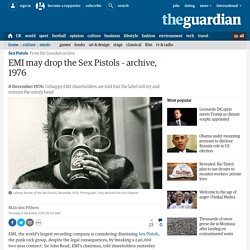 Sir John Read, EMI’s chairman, told shareholders yesterday that the directors were carefully considering both the contract and plans to release subsequent Sex Pistols’ albums. The group, whose use last week of four-letter words on Today the Thames Television show, led to the suspension of Mr Bill Grundy the interviewer, has had 13 British concerts cancelled by universities, theatres and town halls. But Mr Malcolm McLaren, Sex Pistols’ manager, said yesterday he was booking new British dates, and arranging meetings with American record promoters about a coast-to-coast tour of the US. 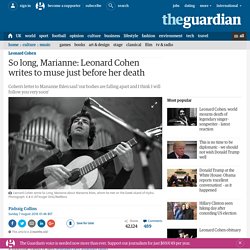 Ihlen, whom Cohen wrote about in So Long, Marianne and Bird on a Wire, died in Norway on 29 July, aged 81. Cohen met her on the Greek island Hydra in the 1960s and they became lovers. So Long, Marianne appeared on his 1967 album Songs of Leonard Cohen. Her close friend Jan Christian Mollestad got in touch with Cohen to tell him Ihlen was dying. “It took only two hours and in came this beautiful letter from Leonard to Marianne. Playlists: 10 chefs-d'œuvre et 10 trésors cachés de Leonard Cohen. Leonard Cohen Has Died at Eighty-Two. Leonard Cohen, who died this week, was one of our greatest songwriters—Bob Dylan told Cohen that he considered him his nearest rival—and is a figure of almost cult-like devotion among fans. 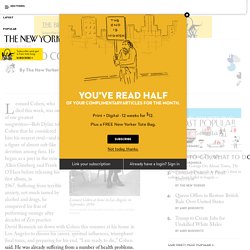 He began as a poet in the vein of Allen Ginsberg and Frank O’Hara before releasing his first album, in 1967. Suffering from terrible anxiety, not much tamed by alcohol and drugs, he conquered his fear of performing onstage after decades of Zen practice. David Remnick sat down with Cohen this summer at his home in Los Angeles to discuss his career, spiritual influences, triumphant final tours, and preparing for his end. “I am ready to die,” Cohen said. He was already suffering from a number of health problems. Leonard Cohen's life and career – in pictures.

Leonard Cohen – he knew things about life, and if you listened you could learn. Leonard Cohen dead at 82: world mourns legendary singer-songwriter – latest. I was just on NPR radio, giving the most moronic answers to questions I’ve ever given anyone about Leonard Cohen, because I didn’t want to talk. It’s still sinking in. My brain is numb. In this year of losses, so many losses, in this black week for the world, this tops them all.I’m writing this with constant interruptions, calls and texts from radio and newspapers wanting to know this and that.

Everyone wants details, how and where and why he died. Well, he went out in a blaze of glory. Glam: innovative predecessor of punk in a pop disguise? Glam is perhaps the most derided and disparaged form of rock music. Even calling it rock feels strange; it’s pure pop – sexy, sugar-coated and aimed at a mass-market. Most pop of all is glam’s complete disregard for the kind of authenticity that defines so much of rock’s history, from Elvis, rock’s first true star, to Kurt Cobain, its last. It’s this perceived lack of honesty, a certain awareness and embrace of its own ridiculousness, which has most often alienated rock fans and rock critics. Night tube: top 10 London clubs – chosen by the experts. Village Underground, Shoreditch “The tube carriages on the roof; the ever-changing mural on the wall outside; the exposed brickwork and giant skylights; that green room.

But it could mean the opposite. Reggae, riots and record shops – a brief history of Bristol's music scene. BBC Radio 6 Music decamps to Bristol this weekend for its third 6 Music festival. It’s a city with a fantastic musical heritage, one that perfectly encapsulates the alternative spirit that is the station’s beating heart. Seattle declares February 7th as “International Clash Day” in honor of legendary punk band. The city of Seattle, Washington has declared February 7th, 2016 as “International Clash Day” in honor of the legendary punk band. An official proclamation written by Mayor Edward B. Murray recognizes The Clash for “establishing their unique sound combining punk with reggae, dub, funk, and ska, behind socially conscious lyrics.” The proclomation also notes the band’s 1982 performance in Seattle during which they “[outshone] headliners The Who, and [inspired] a young audience member, Jeff Ament, to grow up and become the bassist for Pearl Jam.”

(Read: The Clash’s Top 20 Songs) Beginning 6:00 a.m. I feel better at 60 than when I was young. Today I turn 60. My eldest of four daughters, Jean, is 22. The generation gap seems vast. « Honnie soit la oi ! » Histoire d’une forme musicale de protestation sociale – Fragments sur les Temps Présents. How we made Waterloo Sunset. David Bowie: the man who read the world. Bowie in Berlin: 'He drove round the car park at 70mph screaming that he wanted to end it all' London Music MapHome - London Music Map. Chuck D: 'We battled the mainstream we fought every goddamn minute' Madness at the Electric Ballroom - review: archive, 19 November 1979. 1966: the year youth culture exploded. ‘The history of punk was always HIS story’: the women rewriting rock.

Music-making and the myth of the tortured genius. Elvis Costello and the curse of Top of the Pops. Can art change the world? The work of street artist JR – in pictures. JR: ‘I realised I was giving people a voice’ Les clubs mythiques (1/7): l'Haçienda, house et ecsta. Guy Debord, inspirateur du punk. Les Inrocks - Playlist : 20 morceaux historiques du gangsta rap. How John Peel created our musical world. Madchester, grunge chic and Kate Moss: how the 90s shaped our world. Rock Against Racism: the Syd Shelton images that define an era.

[YNTHT] Morceau Classique : dix choses à savoir sur "My Generation" de The Who (1965) Readers recommend: songs about dogs. To the end: Blur’s Parklife and me. The life and times of Joan Baez: songwriter, musician and activist – in pictures. New Order: 'We want music without any of the peripheral rubbish' – a classic interview from the vaults. Lloyd Cole: ‘Quite a number of fans have been completely bemused’ Hunter S Thompson, High Times and how to survive the hangover from hell. Anton Corbijn : “Photographier des chanteurs, cela n’a plus aucun intérêt aujourd’hui” The Lemonheads: 10 of the best. Blur-Oasis, la « guerre des charts » fête ses 20 ans. This Is England ’90: it’s bye-bye Thatcher, hello acid house. Is it OK to release ‘new’ music after an artist’s death? Vingt ans après, comptons les points entre Oasis et Blur. Britpop: a cultural abomination that set music back. 3D and the Art of Massive Attack – in pictures.