How Did the Practice of Women Jumping Out of Giant Cakes Start? Diane F. asks: Who started the tradition of girls jumping out of cakes? 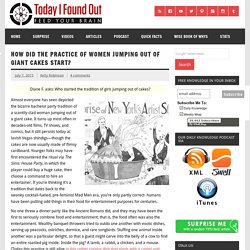 Almost everyone has seen depicted the bizarre bachelor party tradition of a scantily-clad woman jumping out of a giant cake. I worked as a carnie, and possibly for the mob — Hopes&Fears — flow "What Do You Do" San Gennaro is a pretty well known festival that happens in early September in the Little Italy neighborhood of New York. 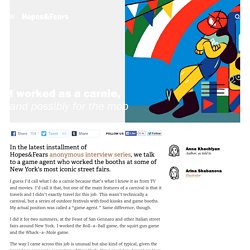 It’s a tradition that was carried over from Southern Italy by the original immigrants who settled in the city at the turn of the century, most of whom were from Naples and Sicily. San Gennaro is the patron saint of Naples, and his feast day falls on September 19 in the liturgical calendar of the Roman Catholic Church. The entire week and a half before that and the day after is dedicated to celebrating the occasion.

It’s a major production. There’s live music. The Bat Doctor is In: Seriously Illegal Softball Bats and The Men Who Make Them. I’m driving to a location I’ve sworn not to disclose. 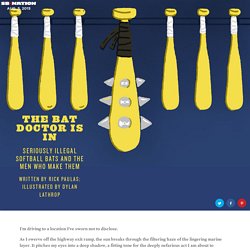 How Americans Used to Picnic. Grab your basket, your bug spray, and your blanket of choice: it’s time for a historic picnic with the help of Mary Ellen W. 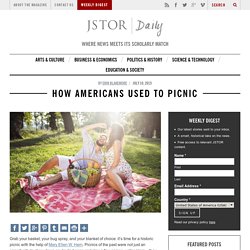 The Strange Journey of the World’s Worst Smell. How Do The Yellow Pages Still Make Money? - Thumbtack Journal. “There is a huge amount of money to be made in end of life businesses. 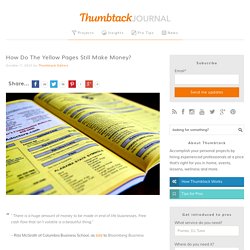 Free cash flow that isn’t volatile is a beautiful thing.” – Rita McGrath of Columbia Business School, as told to Bloomberg Business Disruption can move fast. When Chris Silver Smith joined one of the largest publishers of yellow pages in 1997, he became part of an extremely profitable enterprise. While newspapers and television stations create expensive content like articles and sitcoms—and pay the bills by placing ads next to articles and playing them during commercial breaks—the publishers of yellow pages simply send every single household a thick book of pure advertising.

“The industry seemed so virtually indestructible,” Smith later reflected, that “veteran employees commonly told me that [yellow pages] company stock was a rock-solid ‘sure bet’ and local businesses would ‘always need the yellow pages.’” The Life of a Teen Beauty Pageant Host. Has Zak Slemmer found his calling? 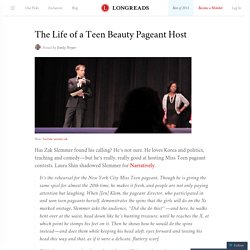 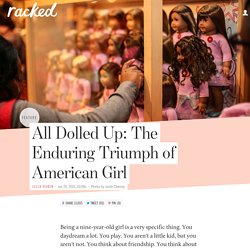 It very well may have been an essential part of your nine-year-old girldom. From the beginning, from the time it was a mere kernel of an idea scrawled on a postcard, American Girl was engineered for nine-year-old girls. It all began when Pleasant Rowland, who was working for an educational publishing company at the time, took a trip to Colonial Williamsburg. Rowland had had a varied career; she'd been an elementary school teacher, a TV news reporter, a textbook writer. History and education were her passions, and while she was in Virginia, inspiration struck. How The Television Has Evolved. The television counts among a handful of designs that most dramatically changed 20th-century society. 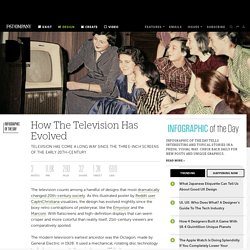 As this illustrated poster by Reddit user CaptnChristiana visualizes, the design has evolved mightily since the boxy retro contraptions of yesteryear, like the Emyvisor and the Marconi. With flatscreens and high-definition displays that can seem crisper and more colorful than reality itself, 21st-century viewers are comparatively spoiled. Alfred Kahn's brave 1977 bid for clear corporate prose. The recently deceased (2010) Alfred Kahn was an economist and academic who was beloved for his notorious memo on clear corporate communications. 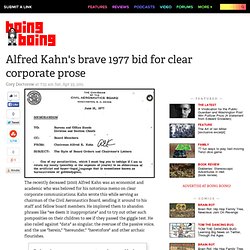 Kahn wrote this while serving as chairman of the Civil Aeronautics Board, sending it around to his staff and fellow board members. He implored them to abandon phrases like "we deem it inappropriate" and to try out other such pomposities on their children to see if they passed the giggle test. He also railed against "data" as singular, the overuse of the passive voice, and the use "herein," "hereunder," "heretofore" and other archaic flourishes. Early on in my career someone returned a paper I had written along with a copy of what was known as "the Kahn memo" which he had circulated in 1977 to his colleagues at the Civil Aeronautics Board. Before VHS And Betamax, There Was Cartrivision. Last known VCR manufacturer to stop production. Art of the Title. Champions of VHS Since 2004, Celebrating odd and hilarious found videos. The secret sounds in movies and TV. You might not have heard the term ‘Foley’ before, but you will possibly have witnessed it – probably in the last film or TV programme you watched – without even realising. 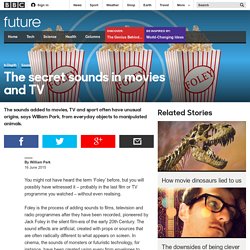 Foley is the process of adding sounds to films, television and radio programmes after they have been recorded, pioneered by Jack Foley in the silent film-era of the early 20th Century. The sound effects are artificial, created with props or sources that are often radically different to what appears on screen. In cinema, the sounds of monsters or futuristic technology, for instance, have been created using every from envelopes to breezeblocks and biplane motors. It’s not just for fictional TV or movies either.

In a radio documentary, The Sound of Sports, Dennis Baxter describes how sounds are added to sporting events, from rowing to athletics. Below we look at some intriguing Foley examples you may recognise from TV and the big screen – let us know on Twitter or Facebook if you’d add to the list: How “Lost” changed the way the world watches TV. Mr. Eko, the Nigerian drug lord turned priest, would say that the story of Lost’s creation was not coincidence, but fate. Hatched as a half-baked kernel of an idea by an ABC executive on his way out the door, the show became a gargantuan worldwide success just a few months later. The timing was fortuitous. Lost debuted just as social media was entering adulthood, and the show became the quintessential 21st century viewing experience.

The “perfect storm of Lost,” as TV critic Alan Sepinwall puts it in his book The Revolution Was Televised, began on September 22, 2004. When Lost began, Facebook was in its infancy and Twitter was still two years away. How Futurama changed animated TV without you noticing. Futurama became a fan favorite shortly after its premiere, but the higher-ups at Fox never saw it that way. That's partially because it wasn't produced for mass audiences. The creators always knew it would have its own specific niche. The Dark Side of Television's 'Golden Age' - Pacific Standard.

Michael Z. Newman and Elana Levine aren't cheering. Their monograph, Legitimating Television: Media Convergence and Cultural Status, was first published in 2011, but, in 2015, its central argument is as relevant as ever. The Worst TV Show Finales, And Other News. TV Show Finales, From Most Loved To Most Hated Sticking the landing is tough, both for gymnasts and for long-running TV series. Sometimes a show nails it (Breaking Bad), sometimes it screws the pooch (How I Met Your Mother), and sometimes it, uh — *black screen* (The Sopranos). On the Other Hand. Jon Irwin | Kill Screen | September 2015 | 22 minutes (5,439 words)

A List of (Mostly) Failed TV Reboots and Remakes. Why Does TV Continue to Reboot and Remake Properties When Their Success Rate Is So Anemic? By Dustin Rowles | Miscellaneous | October 12, 2015 | Comments (63. Newrepublic. What does it take for you to drop a TV show? - Jennette Fulda. PopCorn Garage. You Must Remember This. How Cinema Has Depicted Aliens, From 1902 Until Today. Suzanne Broderick, "Real War vs. Reel War: Veterans, Hollywood, and WWII" (Rowman and Littlefield, 2015) Stanley Kubrick - Chicago 1949. Theverge. A Rare Look Inside Iron Mountain, Home To America's Most Priceless Artifacts. The Best Bond Gadgets Of All Time. James Bond, in his various faces and reboots, has been maintaining the Anglo-American sphere of influence for over 50 years. James Bond 007 Cars Evolution. A Lost 'Shrek' Story Reel With Chris Farley As The Voice Of Shrek Surfaces Online.

Rebecca Brando, Listen to Me Marlon. How To Become A Professional Movie Extra - Jesse Heiman, Hollywood Background Actors, Central Casting. A Day in Hollywood. Downtown Film and TV Culture 1975-2001, Hawkins. The History Of Horror. A Brief History Of Evil Children In Horror Movies. Why Props Matter. Fuck Yeah Women Film Directors. Heroines of Cinema: Why Don't More Women Make Movies? Mar. By Matthew Hammett Knott | Indiewire March 24, 2014 at 10:53AM Writing this column, my gender makes me well aware that issues relating to women in film can be experienced quite differently in theory and practice.

'Superman' and 'Superman II': What Is, and What Might Have Been. The Evolution of Music Consumption: How We Got Here. When Does a Medium Die? "CDs Versus LPs, Which is Better?" 1994 CBS Radio Network Show Unearthed! Home Page for the National Music Museum. Ritabentonmusiclibrary.tumblr. MusicPal. Because Recollection. Gobelins Sound Experiments. Every Noise at Once. What Is That Song - TV Commercials. Denniz Pop, Max Martin, and Cheiron Studios: The man who invented modern pop. Song Exploder. ‘Auld Lang Syne’: What’s the origin and meaning? - DecodeDC Story. Sound Decision.

Oxford American - Dithyrambalina. The Broken Pop of James Bond Songs. Looking for Lewis. The Summer of Censors — Cuepoint. Opera is the New Black. In the Morning I'll Rise Above by Joe Bonomo. YouTube as a virtual springboard: Circumventing gender dynamics in offline and online metal music careers. The Fragile Ears of Men. C-3PO, wookies and Jon Bon Jovi: the crazy true story of the Star Wars Christmas album on CBC Music.

Dixie Chicks Archives. The Night That John Coltrane Played Seattle and. Watch The First-Ever Live Performance From Techno Godfathers Kraftwerk. Here's How One Writer Spent Way Too Long Deciding the Best Rap Song Every Year from 1979 to 2014. Everything Is A Remix Full Film. Hiding in Plain Sight: The Curious Legacy of Outkast. '80s Icon Billy Idol Is Back to Remind You How Punk-Rock He Is. The Female Body of Punk. Buena Vista Social Club Bids Adios on Farewell Tour. James “Blood” Ulmer, Guitar Activist. Roscoe Mitchell Live at Pioneer Works. Psy says he has 'no chance' of another 'Gangnam Style' success. YUME. 2015's top 100 digital music stories: 61 - 100.

The Fader Marks 100 Issues by Posting Them All on BitTorrent. John Berg, Art Director Who Made Album Covers Sing, Dies at 83. Listening to Music May Be Good for Heart Health. Old-School Cassettes Make Comeback as Consumers Yearn for the Antique. Bloomberg Business. Amy Lombard on going behind the scenes of Kidz Bop for Bloomberg. Mastering the violin’s making. Relaxing Footage Of A Wooden Flute Being Born. The Evolution of Western Dance Music!