Remembering Nazism: Nazi Propaganda. Nazi Germany - Propaganda. How did the Nazis use propaganda? - The Holocaust Explained Website. Goebbels sought to Nazify the whole of German culture, wiping away what Hitler saw as the ‘decadence’ of 1920s Weimar Germany, painting instead a picture of a Germany with traditional values and with Hitler as the beloved Führer. 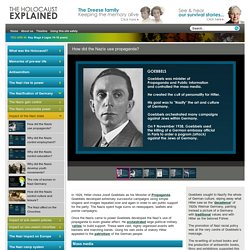 The promotion of Nazi racial policy was at the very centre of Goebbels’s message. The re-writing of school books and the production of antisemitic books, films and exhibitions supported this policy. In 1929, Hitler chose Josef Goebbels as his Minister of Propaganda. Goebbels developed extremely successful campaigns using simple slogans and images repeated over and again in order to win public support for the party. The Nazis spent huge sums on newspapers, leaflets and poster campaigns. Art Under Fascism: Propaganda. Art was often was used as propaganda by the Nazi regime in Germany. 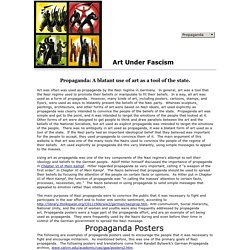 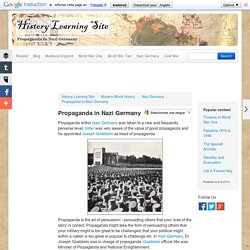 Hitler was very aware of the value of good propaganda and he appointed Joseph Goebbels as head of propaganda. Propaganda is the art of persuasion - persuading others that your 'side of the story' is correct. Joseph Goebbels. Joseph Goebbels, the son of Fritz Goebbels and Katharina Odenhausen, was born in Rheydt, Germany, on 29th October, 1897. 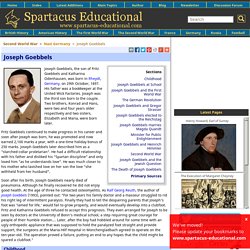 His father was a bookkeeper at the United Wick Factories. Joseph was the third son born to the couple. Teenage Pot Users Show Poor Long-Term Memory as Adults. Young adults who smoked marijuana every day for three years during their teen years have an oddly shaped hippocampus and performed poorly on long-term memory tasks, according to a new study published in Hippocampus this week. 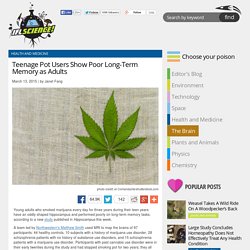 A team led by Northwestern’s Matthew Smith used MRI to map the brains of 97 participants: 44 healthy controls, 10 subjects with a history of marijuana use disorder, 28 schizophrenia patients with no history of substance use disorders, and 15 schizophrenia patients with a marijuana use disorder. Participants with past cannabis use disorder were in their early twenties during the study and had stopped smoking pot for two years; they all started using marijuana daily when they were between 16 and 17 years old for about three years.

German art. German art has a long and distinguished tradition in the visual arts, from the earliest known work of figurative art to its current output of contemporary art. 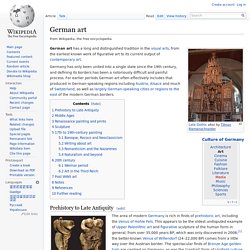 Germany has only been united into a single state since the 19th century, and defining its borders has been a notoriously difficult and painful process. For earlier periods German art often effectively includes that produced in German-speaking regions including Austria, Alsace and much of Switzerland, as well as largely German-speaking cities or regions to the east of the modern German borders. Prehistory to Late Antiquity[edit] Venus of Hohle Fels, 35,000 to 40,000 BP, the oldest known figurative work of art (true height 6 cm (2.4 in)). 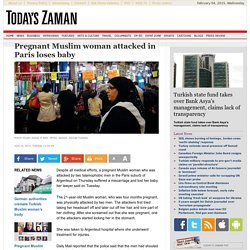 The 21-year-old Muslim woman, who was four months pregnant, was physically attacked by two men. The attackers first tried taking her headscarf off and later cut off her hair and tore part of her clothing. Timeline of the Russian Civil War 1918. CZECH LEGION ON A TRAIN IN SIBERIA Russian History 1918 Russian Civil War Timeline - Year 1918 January 10, 1918 (December 28, 1917 old style) The Cossacks declare their independence and form the Republic of the Don. 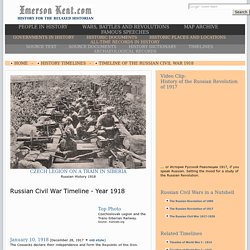 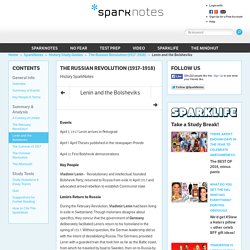 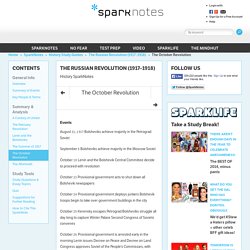 The Russian Revolution (1917–1918): The February Revolution. Events February 22, 1917 Nicholas II leaves Petrograd to visit troops February 23 International Women’s Day demonstration in Petrograd February 24 Massive strikes and demonstrations occur throughout the capital. W. Summary There were three reasons why Civil War broke out in Russia in 1918. The first reason was that the Bolsheviks had many enemies: These groups co-operated to try to bring down the Bolshevik government. A second cause was the Czech Legion – Czech prisoners of war who mutinied, took control of the Siberian Railway, and attacked towards Moscow. Finally, Britain, America and France, angry that Russia had dropped out of the First World War, attacked the Bolsheviks. Education.cambridge.org/media/577134/history_for_the_ib_diploma__causes__practices_and_effects_of_wars___cambridge_education___cambridge_samples.pdf. Austro-Serbian relations up to 1914. Austria-Hungary and Serbia hated each other.

The Fourteen Points. World War One - Causes. The first world war began in August 1914. It was directly triggered by the assassination of the Austrian archduke, Franz Ferdinand and his wife, on 28th June 1914 by Bosnian revolutionary, Gavrilo Princip. This event was, however, simply the trigger that set off declarations of war. The actual causes of the war are more complicated and are still debated by historians today. Alliances An alliance is an agreement made between two or more countries to give each other help if it is needed. A number of alliances had been signed by countries between the years 1879 and 1914. Imperialism Imperialism is when a country takes over new lands or countries and makes them subject to their rule. Militarism Militarism means that the army and military forces are given a high profile by the government. Nationalism. World War I for Kids: Fourteen Points.