Engadget is now a part of Oath. Parenting for a Digital Future – Six myths about children in the digital age. Today Sonia Livingstone is presenting on the panel at the Digital Families 2018 conference discussing the future for young people online – risks, opportunities and resilience. 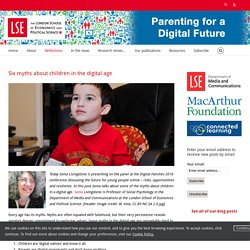 In this post Sonia talks about some of the myths about children in a digital age. Sonia Livingstone is Professor of Social Psychology in the Department of Media and Communications at the London School of Economics and Political Science. [Header image credit: W. Vota, CC BY-NC-SA 2.0.jpg] Reimagining the end-of-life experience - OpenIDEO Challenge. Teaching digital citizenship with picture story books.

Digital Citizenship is a highly important topic for students. 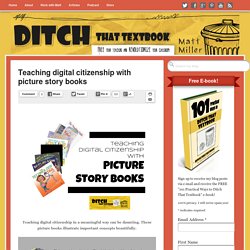 They live in the 21st Century. Many students have access to 1:1 devices at school and even more devices at home. Curricula worldwide mandate the need to teach students about digital citizenship, yet many teachers find it quite daunting to teach their students these vital skills to ensure their safety in online spaces. Manage Your Online Reputation (UK) The 11 Most Crucial Primary School Digital Citizenship Guidelines to Know. The following is adapted from the book Growing Global Digital Citizens (Crockett & Churches, 2017). 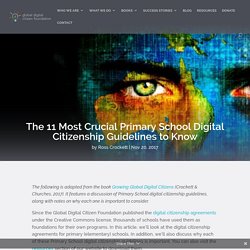 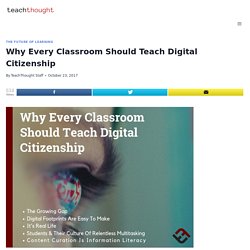 Anonymous sources had posted a ‘questionable’–and NSFW–list for multiple public schools in our city on Instagram, leading to distraught girls, viral Twitter reactions, and an investigation. Discussing 6 Historical Quotes About ... Digital Citizenship Practices? Did you know digital citizenship practices were being talked about long before the Internet was ever a thing? 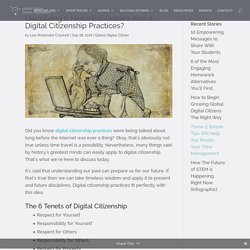 Okay, that’s obviously not true unless time travel is a possibility. Nevertheless, many things said by history’s greatest minds can easily apply to digital citizenship. That’s what we’re here to discuss today. It’s said that understanding our past can prepare us for our future. If that’s true then we can take timeless wisdom and apply it to present and future disciplines. Cyberbullying is NOT a technology issue-here's how to really combat it. Cyberbullying continues to grow and present itself as a huge challenge for schools, government policy makers, stakeholders, parents and the community—but is regulating access to technology and social media the answer? 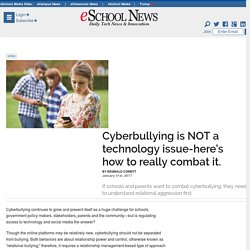 Though the online platforms may be relatively new, cyberbullying should not be separated from bullying. Both behaviors are about relationship power and control, otherwise known as “relational bullying;” therefore, it requires a relationship management-based type of approach in dealing with its impact and prevention. When conducting my Digital Age Parenting classes, one of the things I share with parents is information about how their child is using a device to say and do things to hurt someone or put themselves in danger. However, the device is only facilitating the interaction between the person and the situation. Dr. Measuring global citizenship education: A collection of practices and tools. (Reposted from: The Brookings Institute: Center for Universal Education. 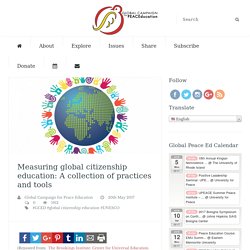 Tuesday, April 11, 2017) By Kate Anderson and Jasodhara Bhattacharya download the full report (pdf) The idea of global citizenship has existed for several millennia. In ancient Greece, Diogenes declared himself a citizen of the world, while the Mahaupanishads of ancient India spoke of the world as one family. This toolkit is the result of the collective efforts of the Global Citizenship Education Working Group (GCED-WG), a collegium of 90 organizations and experts co-convened by the United Nations Educational, Scientific, and Cultural Organization (UNESCO), the Center for Universal Education (CUE) at the Brookings Institution, and the United Nations Secretary General’s Global Education First Initiative’s Youth Advocacy Group (GEFI-YAG).

Helping Students Develop Their Online Identity – George Couros – Medium. As I was speaking at a school in North Broward Preparatory School in Coconut Creek, Florida, and was talking about this, one of the teachers, Jason Shaffer, said, “We already do this.” 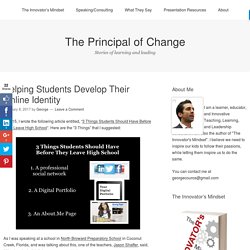 I was so pumped to hear more. I asked him about what he is doing, and he shared that his school has a required course on “personal branding” for students. How to create a sustainable web presence. In the preface to his 2002 book, Small Pieces Loosely Joined Dave Weinberger writes: What the Web has done to documents it is doing to just about every institution it touches. 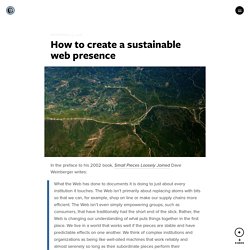 The Web isn’t primarily about replacing atoms with bits so that we can, for example, shop on line or make our supply chains more efficient. The Web isn’t even simply empowering groups, such as consumers, that have traditionally had the short end of the stick. ‘Don’t feed the trolls’ really is good online advice — here’s the evidence – ABC News Australia – Medium. By Evita March Almost half the population of the planet now has access to the internet, with about one in three of those people regularly active on social media. 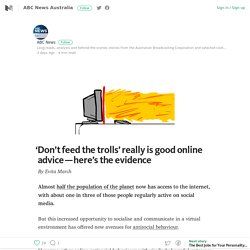 But this increased opportunity to socialise and communicate in a virtual environment has offered new avenues for antisocial behaviour. The problem of cyberbullying has received considerable research attention. However, other online antisocial behaviours with similarly harmful outcomes have received far less consideration — one example being anonymous online trolling. Trolling behaviours typically include deliberately posting inflammatory comments and argumentative messages in an attempt to provoke, disrupt, and upset others. Middle School Digital Citizenship: What Students Need to Know and Why. Middle school includes grades 6 through 8, with kids ranging from ages 11 to 14.

It is absolutely critical to develop middle school digital citizenship skills at this time in their lives. Why? Because they are beginning to take more control of their lives. Their minds are thinking “Me” most of the time, and they are becoming more independent. They are beginning to expand socially both in the physical world and in the digital world, if they have not been doing so already. Digital Literacy, Identity and a Domain of One’s Own. I must have about 10 domain names. That’s a lot less than some people I know, but 10 more than most people. Two of the domain names are those that I own on behalf of other people (my children) while the rest are for various projects and things I’ve done over the years.

My doctoral work neverendingthesis.com is on one of them. I’ve got projects I share with other people (tidepodcast.org). Job Hunting in the Digital Age [Infographic] Job hunting today is not like it was before the dawn of the Internet. Things have changed dramatically. 10 Valuable Digital Age Skills to Take Beyond School. In the past, we’ve talked about the critical 21st-century skills students need and why. But what about other digital age skills? There are so many other useful and practical abilities to have that can help our learners build success and enable lifelong learning. We’re talking about skills students can build, protect, and preserve an identity with and that can enable them to help others do the same. Internet Safety Education: 10 Questions Parents Should Be Asking.

Last week a school near me suffered a social media mishap involving its students. This, an increasingly common byproduct of our day, unfortunately catches many a school by surprise. So I received this call: “Help! Can you come to our school to give an “Internet Safety” presentation? Digital Citizenship, Digital Altruism - Matt Ives. As the internet has flourished and grown exponentially over the years, keeping our children and students safe has been quite the cause for concern – from media, from parents, from teachers. Digital citizenship, at it’s very least then, can be thought of as developing the skills to keep safe online, how to avoid the nasty bits of the internet, and strategies to deal with it when they eventually do. 10 understandings about digital citizenship…