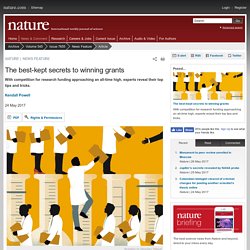 It was 2007 and he had already earned two early career grants for his laboratory at Washington University in St Louis, Missouri. But when he applied for his first major research grants from the US National Institutes of Health (NIH) he got two crushing rejections. Nagele had made some rookie mistakes: one proposal, for a 10,000-patient clinical trial, was too large in scope to be eligible, and the other was not a priority research area for the agency. “Those projects never saw the light of day,” he says, “and rightfully so.” By his third attempt he had learnt some invaluable tips and tricks.

In 2015, his homework paid off. Competition for funding is ruthless, and the stakes are particularly high at the NIH — the largest single source of funding for biomedical research in the world. Embrace your inexperience Add someone senior — maybe. Publications – Flavia Montaño-Centellas. In preparation and submitted Montaño-Centellas, F., Loayza A. 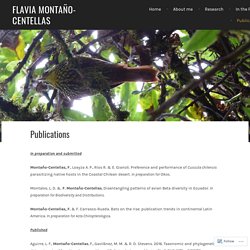 P., Rios R. & E. Gianoli. Preference and performance of Cuscuta chilensis parasitizing native hosts in the Coastal Chilean desert. In preparation for Oikos. Montalvo, L. Montaño-Centellas, F. & F. Published Aguirre, L. Montaño-Centellas, F. & A. Montaño-Centellas, F., Moya, M. Montaño-Centellas, F. 2013. Nitrogen isotope ratios shift with plant size in tropical bromeliads. The Delphi technique in ecology and biological conservation: applications and guidelines - Mukherjee - 2015 - Methods in Ecology and Evolution. Fork our course: A semester-long Data Carpentry course for biologists. This is post is co-authored by Zack Brym and Ethan White Over the last year and a half we have been actively developing a semester-long Data Carpentry course designed to be easily customized and integrated into existing graduate and undergraduate curricula. 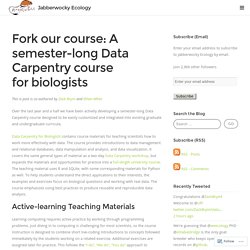 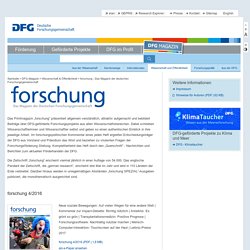 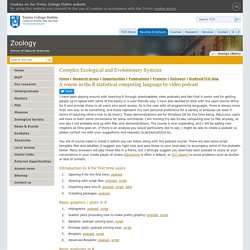 I have also decided to stick with the open-source ethos for R and provide these to all users who want access. As is the case with all programming languages, there is always more than one way to do something, and these represent my own personal preference for a variety of analyses (at least in terms of teaching others how to do them). These demonstrations are for Windows OS for the time being. You will of course need to install R before you can follow along with the podcast course. Has any popular approach for inferring process from pattern in ecology ever worked?

Ecologists, especially community ecologists, are always looking for ways to infer process from pattern, cause from effect. 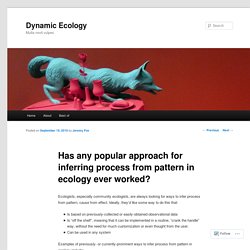 Ideally, they’d like some way to do this that: Is based on previously-collected or easily-obtained observational dataIs “off the shelf”, meaning that it can be implemented in a routine, “crank the handle” way, without the need for much customization or even thought from the user.Can be used in any system Examples of previously- or currently-prominent ways to infer process from pattern in ecology include: The above approaches to inferring process from pattern all have something in common: none of them work, either in theory or practice.

Which leads to the my question: Has any widely applicable “off the shelf” method to infer process from pattern in ecology ever worked? It doesn’t count if a method is merely “suggestive”. Note that I do think there are cases outside the physical sciences where such methods exist. The problematic effect of small effects. Why do ecologists often get different answers to the same question? 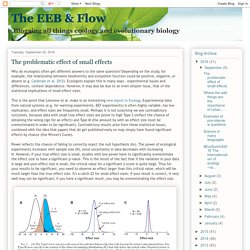 Depending on the study, for example, the relationship between biodiversity and ecosystem function could be positive, negative, or absent (e.g. Cardinale et al. 2012). Ecologists explain this in many ways - experimental issues and differences, context dependence. However, it may also be due to an even simpler issue, that of the statistical implications of small effect sizes. This is the point that Lemoine et al. make in an interesting new report in Ecology. Power reflects the chance of failing to correctly reject the null hypothesis (Ho). The solution to this issue is clearly a difficult one, but the authors make some useful suggestions. The EEB & Flow: The problematic effect of small effects.