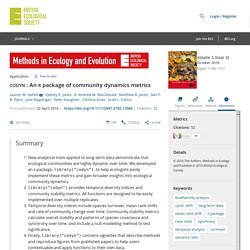 This has the potential to deepen our understanding of ecological patterns and processes. For example, many traditional measurements of community structure, such as diversity indices and rank‐abundance curves, represent ‘snapshots in time’ that poorly capture community dynamics (Collins et al . 2008). The development of analogous temporal metrics, such as species turnover and rank shifts, has highlighted how much communities can vary over time (Collins, Micheli & Hartt 2000; Collins et al . 2008; Cleland et al . 2013). Similarly, species dynamics can affect the stability of community properties such as total cover and net primary production. However, there are several impediments to the broad adoption of temporal analyses by the ecological community. Colonization and extinction rates estimated from temporal dynamics of ecological communities: The island r package - Ontiveros - 2019 - Methods in Ecology and Evolution.

The dynamics of community assembly play out over ecological time‐scales. 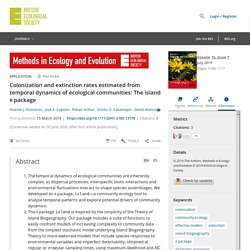 Its central unresolved problems require datasets that span these temporal scales. Long‐term data hold the key to unravelling the respective roles that ecological interactions and environmental factors play in community assembly over space and time. Our understanding of how species diversity and community structure change with time has been influenced by opposing theories emphasizing either dispersal and individual species adaptations to local environments (Gleason, 1926) or biotic interactions (Clements, 1916). Earlier approaches in studying the relative importance of community assembly drivers have largely been based on randomization procedures of species within the assembly (package stepcam , van der Plas et al. (2015), Chase, Kraft, Smith, Vellend, and Inouye (2011)).

We present an r package, island, that helps analyse temporal patterns in community assembly. Box 1. . , where Supporting Information. Species Synchrony and Its Drivers: Neutral and Nonneutral Community Dynamics in Fluctuating Environments. Biodiversity Models: What If Unsaturation Is the Rule?: Trends in Ecology & Evolution. Microhabitat partitioning promotes plant diversity in a tropical montane forest - Jones - 2011 - Global Ecology and Biogeography. Coefficient.variation function. Integrating the Effects of Area, Isolation, and Habitat Heterogeneity on Species Diversity: A Unification of Island Biogeography and Niche Theory. 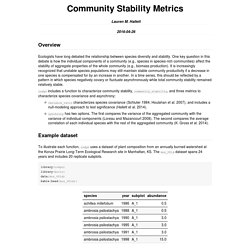 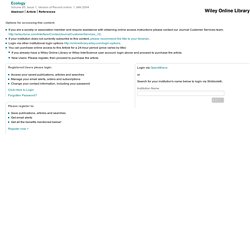 Register now > Visualising Similarity: Maps vs. Graphs. The visualization of complex data sets is of essential importance in communicating your data products. 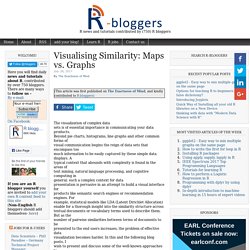 Beyond pie charts, histograms, line graphs and other common forms of visual communication begins the reign of data sets that encompass too much information to be easily captured by these simple data displays. A typical context that abounds with complexity is found in the areas of text mining, natural language processing, and cognitive computing in general; such a complex context for data presentation is pervasive in an attempt to build a visual interface for products like semantic search engines or recommendation engines. For example, statistical models like LDA (Latent Dirichlet Allocation) enable for a thorough insight into the similarity structure across textual documents or vocabulary terms used to describe them. A simple similarity map for iris In this first blog on this topic, the idea is to focus on the basics of ergonomics in the visualization of similarity information. Related. How To Make 15 Different Types Of Flat Vector Trees. Habitat filtering and niche differentiation jointly explain species relative abundance within grassland communities along fertility and disturbance gradients - Maire - 2012 - New Phytologist. 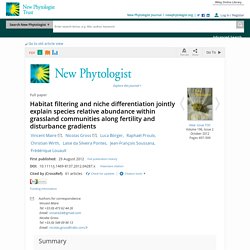 Identifying the mechanisms generating species relative abundances within communities is a central question in ecology (McGill, 2010; Murrell, 2010) and there is an ongoing debate on the importance of neutral vs deterministic processes (Hubbell, 2001; Morlon et al., 2009). Neutral theory has successfully predicted species abundance in some cases (Chave, 2004), suggesting that species functional differences are not needed to generate the observed patterns of diversity in nature. HF imposes ecological filters that select individual species from a regional pool because they possess a trait syndrome suitable for a given habitat (Keddy, 1992; Diaz et al., 1998). The independence among sets of traits has two consequences for community assembly processes. . Towards understanding the organisation of metacommunities in highly dynamic ecological systems - Datry - 2015 - Oikos. 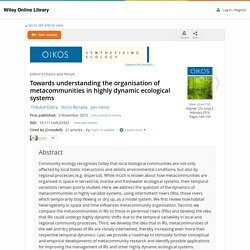 While much is known about how metacommunities are organised in space in terrestrial, marine and freshwater ecological systems, their temporal variations remain poorly studied. Here, we address the question of the dynamics of metacommunities in highly variable systems, using intermittent rivers (IRs), those rivers which temporarily stop flowing or dry up, as a model system. We first review how habitat heterogeneity in space and time influences metacommunity organisation. Second, we compare the metacommunities in IRs to those in perennial rivers (PRs) and develop the idea that IRs could undergo highly dynamic shifts due to the temporal variability in local and regional community processes. Synthesis. Ecological assembly rules in plant communities—approaches, patterns and prospects - Götzenberger - 2011 - Biological Reviews. Understanding how communities of living organisms assemble has been a central question in ecology since the early days of the discipline. 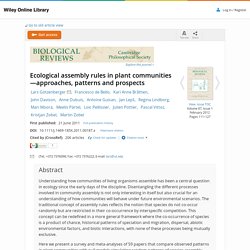 Disentangling the different processes involved in community assembly is not only interesting in itself but also crucial for an understanding of how communities will behave under future environmental scenarios. The traditional concept of assembly rules reflects the notion that species do not co-occur randomly but are restricted in their co-occurrence by interspecific competition. This concept can be redefined in a more general framework where the co-occurrence of species is a product of chance, historical patterns of speciation and migration, dispersal, abiotic environmental factors, and biotic interactions, with none of these processes being mutually exclusive. Multiple Comparisons in Nonparametric Tests. I received received a question about controlling for inflated Type I error through Bonferroni corrections in nonparametric tests. 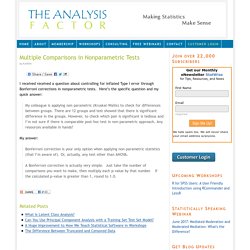 Here’s the specific question and my quick answer: My colleague is applying non parametric (Kruskal-Wallis) to check for differences between groups. There are 12 groups and test showed that there is significant difference in the groups. Bonferroni with Mann-Whitney? - dWAnswers. Beta-diversity in temperate and tropical forests reflects dissimilar mechanisms of community assembly - Myers - 2012 - Ecology Letters. Site-to-site variation in species composition (β-diversity) generally increases from low- to high-diversity regions. 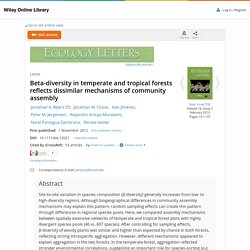 Although biogeographical differences in community assembly mechanisms may explain this pattern, random sampling effects can create this pattern through differences in regional species pools. Here, we compared assembly mechanisms between spatially extensive networks of temperate and tropical forest plots with highly divergent species pools (46 vs. 607 species). After controlling for sampling effects, β-diversity of woody plants was similar and higher than expected by chance in both forests, reflecting strong intraspecific aggregation. However, different mechanisms appeared to explain aggregation in the two forests.

Other sources. GetSharedSiteSession?rc=4&redirect= One recurrent problem of the simple correlative approaches previously described (e.g., one single model for richness or a simple stacking of species models) is that they cannot account explicitly for processes, but can only fit and predict patterns. This limits the capacity for these approaches to fully account for the duality of unsaturated communities where composition is constrained by different drivers. Here, we propose instead that if models have to account for this duality, they should be able to incorporate the different mechanisms behind biodiversity drivers (i.e., ecological, historical, and evolutionary processes) operating across multiple scales. There is thus a challenge to develop modelling approaches incorporating more process-based drivers in generic, easily transferable, and applicable ways.

The discontinuity hypothesis provides a fertile avenue for addressing this problem by linking measureable proxies to inherent scales of structure within ecosystems. Here we outline the conceptual framework underlying discontinuities and review the evidence supporting the discontinuity hypothesis in ecological systems. So close and yet so far away: long-distance dispersal events govern bryophyte metacommunity reassembly - Barbé - 2016 - Journal of Ecology.

An Error Occurred Setting Your User Cookie. Assembly Rules within a Contingent Ecology on JSTOR. Divergent responses of β-diversity among organism groups to a strong environmental gradient - Jonsson - 2016 - Ecosphere. COMMUNITY CONVERGENCE IN DISTURBED SUBTROPICAL DUNE FORESTS - Wassenaar - 2005 - Ecology. Do communities return to their former state when we disturb them? The answer is “surely not always,” since some disturbances may be so devastating that recovery will be impossible. If communities do recover, then how fast is that recovery? Do different subsets of species return at the same rate? Is that rate a simple exponential recovery— meaning that the change toward the original state is fastest when the community is furthest away and it slows as the community converges?

One such pool, branchfall, is an ecologically important dynamic with links to nutrient cycling, forest productivity, and drought. Identifying and quantifying branchfall over large areas would reveal the role of branchfall in carbon and nutrient cycling. Using data from repeat airborne light detection and ranging campaigns across a wide array of lowland Amazonian forest landscapes totaling nearly 100 000 ha, we find that upper canopy gaps—driven by branchfall—are pervasive features of every landscape studied, and are seven times more frequent than full tree mortality. Moreover, branchfall comprises a major carbon source on a landscape basis, exceeding that of tree mortality by 21%.