BREAKING: HP Files Civil Complaint Against Hurd; I. In response to the news of Mark Hurd’s intention to join Oracle, HP today filed a civil complaint in the California Superior Court (County of Santa Clara) against Hurd. 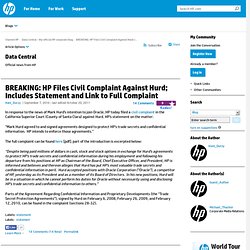 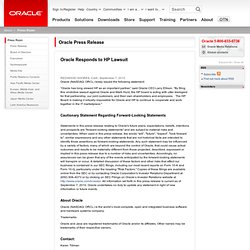 “By filing this vindictive lawsuit against Oracle and Mark Hurd, the HP board is acting with utter disregard for that partnership, our joint customers, and their own shareholders and employees. The HP Board is making it virtually impossible for Oracle and HP to continue to cooperate and work together in the IT marketplace. " The HP Truth Comes Out: The Board Fired Hurd And Then Paid Him To Go Away: Tech Ticker, Yahoo! Finance. Marc Andreessen as Interim CEO of HP : ScottOlsen.Net. Perhaps I am getting too out front on this issue, but the pieces are really starting to fall together for the decision to put in Marc Andreessen as the Interim CEO of HP[11.A note to future readers: as of this date Sunday, 8/15/10 no announcement had been made ;) ]. 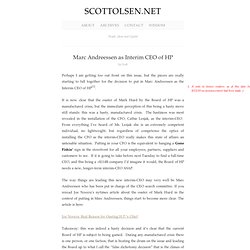 It is now clear that the ouster of Mark Hurd by the Board of HP was a manufactured crisis, but the immediate perception of this being a hasty move still stands: this was a hasty, manufactured crisis. The hastiness was most revealed in the installation of the CFO, Cathie Lesjak, as the interim-CEO. From everything I’ve heard of Ms. Lesjak she is an extremely competent individual, no lightweight, but regardless of competence the optics of installing the CFO as the interim-CEO really makes this state of affairs an untenable situation. Putting in your CFO is the equivalent to hanging a Gone Fishin’ sign in the storefront for all your employees, partners, suppliers and customers to see. And Marc Andreessen has serious tech cred. H-P Board Felt Hurd Settlement With Contractor Impeded Probe. H.P. Followed a P.R. Specialist’s Advice in the Hurd Case. Oracle CEO slams HP over Hurd ousting. Share article googleplus Short of time? 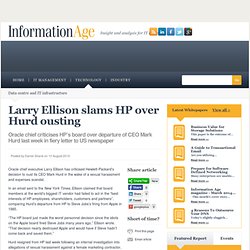 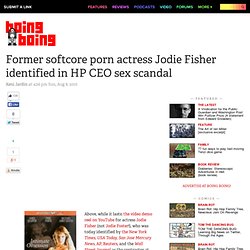 , who was today identified by the New York Times, USA Today, San Jose Mercury News, AP, Reuters, and the Wall Street Journal as the contractor at the center of the sex scandal that led to HP CEO Mark Hurd's recent ouster. Ms. Fisher's film credits include a number of softcore adult films of the "Skinemax"/latenight HBO variety, filmed in the '90s: "Sheer Passion," "Body of Influence," and "Intimate Obsession," among them.

She also performed in the television series "Silk Stalkings," and the noted B-schlocker "Blood Dolls. " Ms. Gloria Allred Releases Statement by Former HP Contractor. LOS ANGELES, Aug. 8 /PRNewswire/ -- Attorney Gloria Allred released the following statement from her client, Jodie Fisher, the former contractor who recently made a sexual harassment claim against former Hewlett-Packard Chairman and CEO Mark Hurd: "I was surprised and saddened that Mark Hurd lost his job over this. 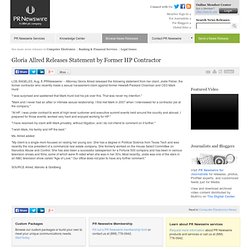 That was never my intention. " "Mark and I never had an affair or intimate sexual relationship. I first met Mark in 2007 when I interviewed for a contractor job at the company. " "At HP, I was under contract to work at high-level customer and executive summit events held around the country and abroad. "I have resolved my claim with Mark privately, without litigation, and I do not intend to comment on it further. " "I wish Mark, his family and HP the best. " Ms. "My client is a single mom focused on raising her young son. L_Holdd258-7834.Jpg 173×240 pixels. Mark Hurd's Love Interest. Hurd Camp Challenges Some Claims. 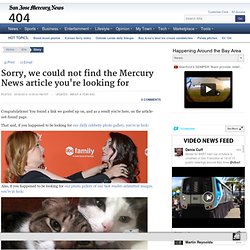 You found a link we goofed up on, and as a result you're here, on the article-not-found page. That said, if you happened to be looking for our daily celebrity photo gallery, you're in luck: Also, if you happened to be looking for our photo gallery of our best reader-submitted images, you're in luck: So, yeah, sorry, we could not find the Mercury News article you're looking for. The article has expired from our system. What next? You may also want to try our search to locate news and information on MercuryNews.com. Why would Mark Hurd take such risks as the head of HP? Mark Hurd ran the the world’s largest technology company, Hewlett-Packard, but he blew it. 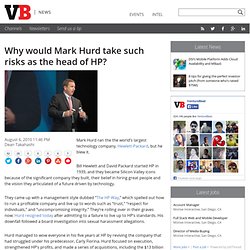 Bill Hewlett and David Packard started HP in 1939, and they became Silicon Valley icons because of the significant company they built, their belief in hiring great people and the vision they articulated of a future driven by technology. They came up with a management style dubbed “The HP Way,” which spelled out how to run a profitable company and live up to words such as “trust,” “respect for individuals,” and “uncompromising integrity.” They’re rolling over in their graves now: Hurd resigned today after admitting to a failure to live up to HP’s standards. His downfall followed a board investigation into sexual harassment allegations. Hurd managed to wow everyone in his five years at HP by reviving the company that had struggled under his predecessor, Carly Fiorina. But HP seems to be accursed, always sinking into some kind of soap opera. The founders of HP had their own personal flaws as well. HP’s Hurd Pockets $28 Million in Cash and Stock to Depart - www.itchannelplanet.com.

Hewlett-Packard Co. will pay Mark Hurd, former chairman and chief executive, $12.2 million in cash and $16 million for stock under terms of a separation agreement detailed in an 8-K document the vendor filed with the U.S. 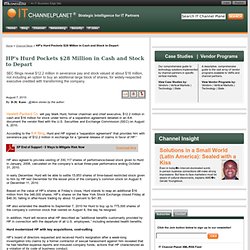 Securities and Exchange Commission (SEC) on August 6, 2010. According to the 8-K filing, Hurd and HP signed a “separation agreement” that provides him with severance pay of $12.2 million in exchange for a “general release of claims in favor of HP.” Mark Hurd Resignation: Top 10 Candidates to Replace Him - Deal Journal. By Deal Journal Michael Corkery and Anupreeta Das report News that Mark Hurd is resigning as Hewlett-Packard’s chief executive is only minutes old, but already the focus is on who will be his successor. 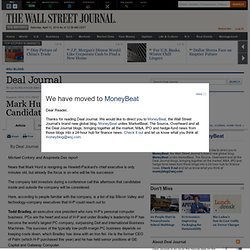 The company told investors during a conference call this afternoon that candidates inside and outside the company will be considered. Here, according to people familiar with the company, is a list of top Silicon Valley and technology-company executives that H-P could reach out to: Who Will Replace Mark Hurd At HP? I have Some Suggestions... Tom Foremski: Ed Zander for HP CEO - It... Hurd’s Hurt - Quentin Hardy - Neural Net Worth. Hurd - Techmeme Search. Techmeme Search finds "items", i.e. blog posts, news stories and tweets, that have appeared as headlines on Techmeme. Items listed only in the "More" areas are excluded from results. By default, only the title and first few sentences are searched. Unchecking "Search title & summary only" extends the search to the full body text. Quoted phrases, wildcards, and standard search operators like + (plus), - (minus), AND, OR, NOT, and parenthesis are all supported.

Narrowing searches based on url, author, date, and other attributes is also possible. Note: all operators that take urls will accept simple domain names, which match any item at that domain, or complete item urls. Hurd - Yahoo! News Search Results. Hurd. Hurd News and Other Resources. The Dossier on Mark Hurd: Deal Maker - Deal Journal. Mark Hurd has stepped down as CEO of H-P after a probe into sexual harassment. In his tenure atop the computer hardware maker, Hurd transformed H-P into a more profitable and financially stable firm. As Barron’s wrote in December 2008, each business unit at H-P became more profitable, while revenue jumped to $114.6 billion from $80 billion under his watch.

After 25 years at NCR, ultimately becoming CEO, Hurd took over at H-P in 2005. The company he inherited was reeling from its acquisition of Compaq Computer and the controversial reign of Carly Fiorina. He soon laid off 12,500 employees and restructured the company. During his five years at H-P, the Baylor graduate (class of 1979) pulled the trigger on a number of big deals that helped transform the company into a one-stop shop for customers. Hurd's Watch Saw Outsized Returns for HP Shareholders - MarketBeat. By Matt Phillips Thomson Reuters Hurd and the Street. Say what you want about Mark Hurd’s ability to properly fill out an expense report, but it’s clear that the guy could generate good returns for investors.

It was March 29, 2005 when news broke that the then head of NCR Corp. was selected to succeed Carla Fiorina, who the company had dumped the previous month. (She had disagreed with the board over how to structure the company.) CORRECTED - CORRECTED-CORRECTED-PENPIX-HP has strong internal talent to repl. In Cutting Off Hurd, Is HP Spiting Its Face? Our Wolfe's Den columnist wonders whether Hewlett-Packard's board isn't taking the easy way out--and potentially reducing future shareholder value--by forcing CEO Mark Hurd to resign. Whatever Hewlett-Packard's employees are feeling in the wake of the sudden resignation of CEO Mark Hurd, I suspect that the company's shareholders are thinking differently. Hey, I'm not defending Hurd for violating HP's standards of business conduct, but if the board's first responsibility is preserving shareholder value, isn't there a better way of handling things than a zero-tolerance kicking out the door of the guy who cleaned up Carly Fiorina's mess?

HP is going through a very delicate time right now, what with two major acquisitions -- 3Com and Palm -- still being integrated into the company. HP Contractor Didn’t Have Sex With Hurd, Lawyer Says.