Holbrook/Twain: An American Odyssey  The reason we hold truth in such respect is because we have so little opportunity to get familiar with it.-- Mark Twain, 1898 On June 18, 2014 the American Film Institute offered audiences the opportunity to become familiar with the truth when its five-day documentary festival in Washington D.C. opened with an instant classic: Holbrook/Twain: An American Odyssey. 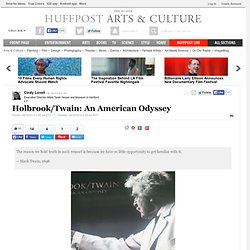 With dozens of excellent new documentaries to choose from, the AFI made the right choice in selecting this film to open the festival. The film is intimate, compelling and all-American. And it is honest. Lovingly directed by Scott Teems and produced by Laura D. Mark Twain. Mark Twain Main Page. Mark Twain on Plagiarism and Originality: “All Ideas Are Second-Hand” Twain BIO info. Huck Finn Homepage.