Mark Twain on Plagiarism and Originality: “All Ideas Are Second-Hand” 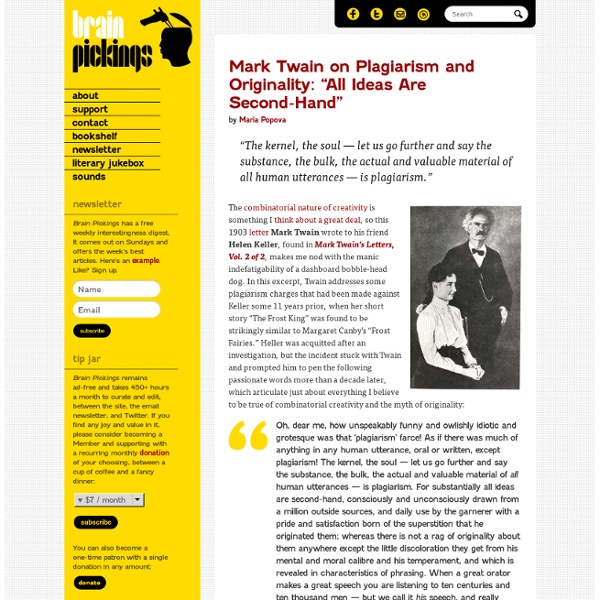 5 Vintage Versions of Modern Social Media from Centuries Ago by Maria Popova From Voltaire’s status updates to Edison’s viral videos, or what Diderot has to do with data visualization. We’ve previously made the case that everything builds on what came before, yet our human tendency is to inflate and overestimate the novelty of our ideas. In November of 1906, artist, anarchist and literary entrepreneur Félix Fénéon wrote 1,220 succinct three-line reports in the Paris newspaper Le Matin, serving to inform of everything from notable deaths to petty theft to naval expedition disasters. Catch our full review, with many more illustrated “tweets,” here. Long before there was Facebook, there was the Republic of Letters — a vast and intricate network of intellectuals, linking the finest “philosophes” of the Enlightenment across national borders and language barriers. More on the project in our original piece about it here. HT MetaFilter If you thought drawing large audiences around silly cat videos is a phenomenon of the YouTube era, you’d be wrong.

GOOD Magazine: The Real Stimulus Package by Maria Popova How the best magazine around got better, or why taking a slight financial hit can get you an intellectual grand slam. We love GOOD Magazine. Always have (well, at least since their launch party in Philly’s Reading Terminal in 2007), always will. Initially, an annual subscription to GOOD used to cost $20, all of which went to your choice of charity from their list of nonprofit partners — great already. Your choice of subscription also gets you various tiers of perks: Anything over $20 gets free admission to Choose GOOD parties (and good they are, take our work for it), $10o or more gets your name immortalized in the magazine, and if you have the good will and appropriate pocket depth to afford the $1,000 subscription, we’re talking lifetime subscription to the magazine, lifetime free admission to Choose GOOD parties, your name printed in the magazine, and a signed, limited edition bound copy of GOOD. Genius. Share on Tumblr

Dog Songs: Mary Oliver on What Dogs Teach Us About the Meaning of Our Human Lives by Maria Popova “Because of the dog’s joyfulness, our own is increased. It is no small gift.” Mary Oliver is not only one of the sagest and most beloved poets of our time, a recipient of a Pulitzer Prize and a National Book Award, but is also among literary history’s greatest pet-lovers. Inhale, for instance, this: LUKEI had a dog who loved flowers. Amidst the poetic, there are also the necessary, playfully practical reminders of how dogs illustrate the limitations of our own sensory awareness: A dog can never tell you what she knows from the smells of the world, but you know, watching her, that you know almost nothing. Then there are the fictional — or are they? “If I ever meet one of these dogs I’m going to invite him to come here, where he can be a proper dog.” In another poem, Oliver affectionately acknowledges that innocent canine gift for employing a dog’s intellect for his own self-gratification, as when he dupes both you the other household human into feeding him breakfast:

The Library Rethought by Maria Popova How to one-up the Greeks and what Shepard Fairey has to do with Copenhagen circa 1891. Libraries have a special place in history as a hearth of culture that kindled the greatest feats of science and the grandest works of art. Almost nine years ago, NYC design studio Pentagram got involved with the Robin Hood Foundation in an inspired effort to build new elementary school libraries throughout NYC’s five boroughs — the best architects were to build them, private companies were to fill them with books, Pentagram were to design the inspirational atmosphere and craft the entire identity for what became The Library Initiative. But they found something interesting — even though the libraries were mostly located in high-ceiling old buildings, shelves could only be as high as the kids could reach, leaving a lot of space between the top of the shelves and the ceiling. Needless to say, we love the idea. Which is why we love seeing The Library of Congress on Flickr. Share on Tumblr