Italy endangers the web. There’s more to the Google-Italy case than meets the. Google Feels Noose Tighten in Italy, Brussels, China, U.S. - Sea. The Italian Job: The Real Reason the Google Convictions are Bad. I was pleased to be interviewed last night on BBC America World News (live!) 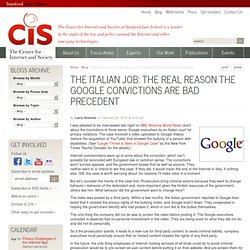 About the convictions of three senior Google executives by an Italian court for privacy violations. The case involved a video uploaded to Google Videos (before the acquisition of YouTube) that showed the bullying of a person with disabilities. (See "Larger Threat is Seen in Google Case" by the New York Times' Rachel Donadio for the details.) Internet commentators were up-in-arms about the conviction, which can't possibly be reconciled with European law or common sense. The convictions won't survive appeals, and the government knows that as well as anyone.

Chilling Google verdict in Italy - Blog - Committee to Protect J. David Drummond is one of three Google executives given a suspended prison term. 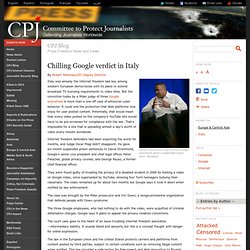 (Reuters) Italy was already the Internet freedom bad boy among western European democracies with its plans to extend broadcast TV licensing requirements to video sites. But the conviction today by a Milan judge of three Google executives is more than a one-off case of antisocial cyber behavior. It could end the protection that Web platforms now enjoy for user posted content.