Is Italy going to make it? Will Italy be able cut its debt and abide by the new EU fiscal rules? 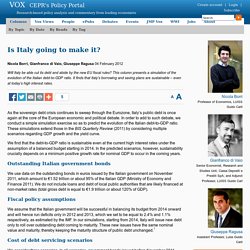 This column presents a simulation of the evolution of the Italian debt-to-GDP ratio. It finds that Italy’s borrowing and saving plans are sustainable – even at today’s high interest rates. As the sovereign debt crisis continues to sweep through the Eurozone, Italy’s public debt is once again at the core of the European economic and political debate. In order to add to such debate, we conduct a simple simulation exercise so as to predict the evolution of the Italian debt-to-GDP ratio. These simulations extend those in the BIS Quarterly Review (2011) by considering multiple scenarios regarding GDP growth and the yield curve. We find that the debt-to-GDP ratio is sustainable even at the current high interest rates under the assumption of a balanced budget starting in 2014. Main-stream.it: Caino for President. Berlusconi Risks The Bond Vigilantes' Wrath, By Reneging On All Austerity P.

As previously reported, Italy is stealthily undoing its entire €45.5 billion austerity plan proposed two short weeks ago, first cutting the provision for tax hikes for high earners, and now also scrapping the proposed pension changes as Ansa reports - the pension proposal, would have excluded time at university, mandatory military service, from calculations of the retirement age and pension level. 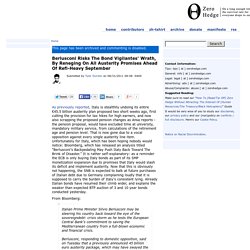 That is now gone due to a vocal opposition against every single austerity line item. If Italian corruption were its own country, it would be the world’s 76th la. Sarkozy and Merkel push euro unity, no joint bonds. What can one say but: "because of the recovery? 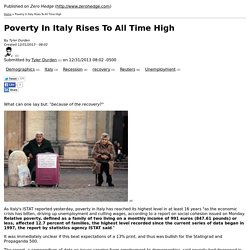 " As Italy's ISTAT reported yesterday, poverty in Italy has reached its highest level in at least 16 years "as the economic crisis has bitten, driving up unemployment and cutting wages, according to a report on social cohesion issued on Monday. Relative poverty, defined as a family of two living on a monthly income of 991 euros (847.61 pounds) or less, affected 12.7 percent of families, the highest level recorded since the current series of data began in 1997, the report by statistics agency ISTAT said. " It was immediately unclear if this beat expectations of a 13% print, and thus was bullish for the Stalingrad and Propaganda 500.

The report, a compendium of data on issues ranging from employment to demographics, said poverty had deepened in all areas of Italy between 2011 and 2012. Relative poverty rose from 4.9 percent to 6.2 percent in the richer north and from 23.3 percent to 26.2 percent in the poorer south. Italy under pressure as debt worries grow - Yahoo! Finance.

Italy calls for euro bonds, UK backs fiscal union - Yahoo! Finance. Summarizing The Terms Of Italian Austerity (Or Here Comes The Piazza Navona. The Simple Reason Millennials Aren't Moving Out Of Their Parents' Homes: Th. Millennials are not budging from their parents' basements, even though the job market is on the mend. 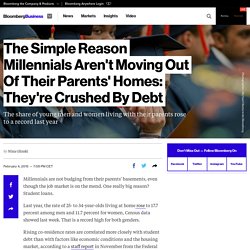 One really big reason? Student loans. Last year, the rate of 25- to 34-year-olds living at home rose to 17.7 percent among men and 11.7 percent for women, Census data showed last week. Elezioni 2013. When in Lisbon, make the day trip to Sintra. 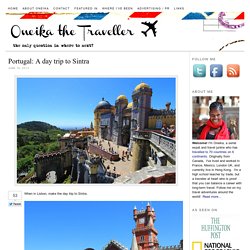 Just a 45-minute train ride outside of Lisbon is the municipality of Sintra, where a complex of long uninhabited royal palaces perch majestically on jagged mountain tops. A visit to Sintra almost feels like a visit to Disneyland minus the rollercoasters– the castles have turrets, just like the ones in Orlando, and, this being an easy and popular day trip from Lisbon, the crowds of tourists are thick as they would be at the Magic Kingdom. After years of touring Europe, it’s safe to say that Liebling and I aren’t super excited when we happen upon castles and palaces (dare I say we’re even a bit “palaced out”), but Sintra still managed to elicit our marvel, make us care. Out of many attractions, we selected two to visit (the Sintra and Pena National Palaces); just enough to whet our curiosity’s appetite without spending a grip on entrance tickets. 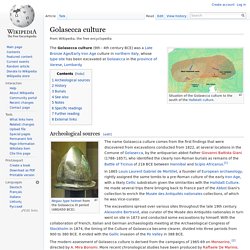 Archeological sources[edit] The name Golasecca culture comes from the first findings that were discovered from excavations conducted from 1822, at several locations in the Comune of Golasecca, by the antiquarian abbot Father Giovanni Battista Giani (1788–1857), who identified the clearly non-Roman burials as remains of the Battle of Ticinus of 218 BCE between Hannibal and Scipio Africanus.[1] The excavations spread over various sites throughout the late 19th century. Alexandre Bertrand, also curator of the Musée des Antiquités nationales in turn went on site in 1873 and conducted some excavations by himself. The modern assessment of Golasecca culture is derived from the campaigns of 1965-69 on Monsorino, [2] directed by A. History[edit] Burials[edit] See also[edit] Notes[edit] Specific readings[edit] 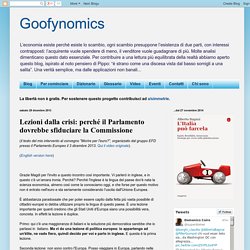 " I.Stat Statistics. What is I.Stat I.Stat is the warehouse of statistics currently produced by the Italian National Institute of Statistics. 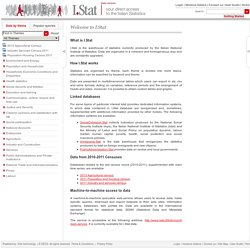 Italy delivers tough austerity measures. Antonio Fatas. Ashoka Mody and Emily Riley at Bruegel.org. At this point in 2014 (in September), the prospects for Italian growth and inflation have weakened considerably—they may well be close to zero for the year. 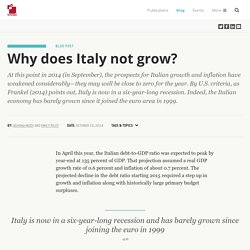 By U.S. criteria, as Frankel (2014) points out, Italy is now in a six-year-long recession. Indeed, the Italian economy has barely grown since it joined the euro area in 1999. In April this year, the Italian debt-to-GDP ratio was expected to peak by year-end at 135 percent of GDP. That projection assumed a real GDP growth rate of 0.6 percent and inflation of about 0.7 percent. The projected decline in the debt ratio starting 2015 required a step up in growth and inflation along with historically large primary budget surpluses. Europa muss sich für die Pleite Italiens wappnen. When Italy is already priced to wreck the eurozone. Was die Finanzmärkte bewegt. Istat.it - Household savings and corporate profits. Principali Risultati dell’Household Finance and Consumption Survey: l’Itali. Romina Gambacorta Bank of Italy. 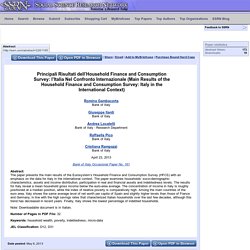 Why questioning Italy's solvency leads inevitably to monetisation. By Christopher Emsden ROME--Inflation expectations in Italy continue to fall, highlighting concerns that the euro zone's third-largest economy will face greater challenges in returning to sustainable growth. Industrial firms expect the inflation rate to stay low at 1.2% five years into the future, according to a Bank of Italy poll released Friday. Medium-term expectations in Italy are for the inflation rate to be at 0.9% a year into the future, which is down from previous expectations of a 1.1% inflation rate forecast at the end of 2013. The inflation target of the European Central Bank is for prices to rise at close to but below 2.0% a year. As Italy accounts for a sixth of the euro-zone economy, prices will have to rise substantially somewhere else to achieve that target. Earlier today, Morgan Stanley released a report titled "Debtflation - One Shock Away? ", which we will review more in depth shortly, but here is the gist: "Because public (and private) sector leverage is very high in parts of [Europe], this unstable situation is better described as debtflation.

With bond yields already very low, when inflation is so subdued the challenge for debt sustainability is whether real growth is enough to cushion any shock. Several euro area economies look vulnerable, we think. " Italy’s Downward Spiral by Hans-Werner Sinn - Project Syndicate. MUNICH – Italy is now in a triple-dip recession. But it didn’t get there by itself. Yes, the economy’s long slide reflects Italian leaders’ failure to confront the country’s loss of competitiveness; but it is a failure that is widely shared in Europe. When the financial crisis erupted in the fourth quarter of 2007, Italy’s GDP plummeted by 7%, then picked up by 3%, dropped again by 5%, rebounded by a measly 0.1%, and lately, during the first half of this year, shrank again, this time by 0.3%. Altogether, Italian GDP has contracted by 9% during the past seven years.

Industrial production, moreover, has plunged by a staggering 24%. Italy has tried to counteract the economic contraction by increasing its public debt. Italy’s new prime minister, Matteo Renzi, wants to stimulate growth. The era of low interest rates that followed the decision in 1995 to introduce the euro inflated a massive credit bubble in southern eurozone countries, which was sustained until the end of 2013. Manovra, Merkel e Bce stanno perdendo la pazienza. Ratios Società FTSE MIB - www.stefanococuzza.it. When Italy is already priced to wreck the eurozone. Ashoka Mody and Emily Riley at Bruegel.org.

Italy delivers tough austerity measures. Was die Finanzmärkte bewegt. Europa muss sich für die Pleite Italiens wappnen. We think that Italy, other peripheral economies and also France will follow Japan for a decade or more of balance sheet recession: stagnant wages, falling real estate prices and a reduction of private debt. On one side, we reckon that this might not be so bad because it will help exports and competitiveness, but still it will be a very hard time. On the other side, we suggest that the weak member states should use the current dis- and deflationary environment and high risk appetite to exit the euro zone. This time financial markets could even welcome the end of the euro zone in its current form. Traders were happy on Thursday with the ECB rate cut until Draghi spoke about negative rates.

George Dorgan sur Twitter : "#Italy has 5.7 million foreign born in 2013,only 1.4 mi. 1990,reason why #GDP per cap stagnant. Url?sa=t&rct=j&q=&esrc=s&source=web&cd=2&ved=0CCYQFjAB&url=http%3A%2F%2Fistituti.unicatt.it%2Fpolitica_economica_ISPE0063.pdf&ei=Zh1XVP7mNoedPcDmgWg&usg=AFQjCNFIyaJWUZUdzLDRkWdIff5CGKS81Q&bvm=bv.78677474,d. Is Italy going to make it? Will Italy be able cut its debt and abide by the new EU fiscal rules? This column presents a simulation of the evolution of the Italian debt-to-GDP ratio. It finds that Italy’s borrowing and saving plans are sustainable – even at today’s high interest rates. As the sovereign debt crisis continues to sweep through the Eurozone, Italy’s public debt is once again at the core of the European economic and political debate. In order to add to such debate, we conduct a simple simulation exercise so as to predict the evolution of the Italian debt-to-GDP ratio.

These simulations extend those in the BIS Quarterly Review (2011) by considering multiple scenarios regarding GDP growth and the yield curve. We find that the debt-to-GDP ratio is sustainable even at the current high interest rates under the assumption of a balanced budget starting in 2014. We consider three scenarios. Why Italy's saving rate became (so) low? When requesting a correction, please mention this item's handle: RePEc:ctc:serie5:ispe0063. Why Italy's saving rate became (so) low? Italian design firms beat recession by drawing on trusted skills. Why it Makes Sense to Exit the Euro Zone in Times of Balance Sheet Recessions. I.Stat Statistics. Antonio Fatas.