Best Places to visit in Italy (b4 u DIE!) 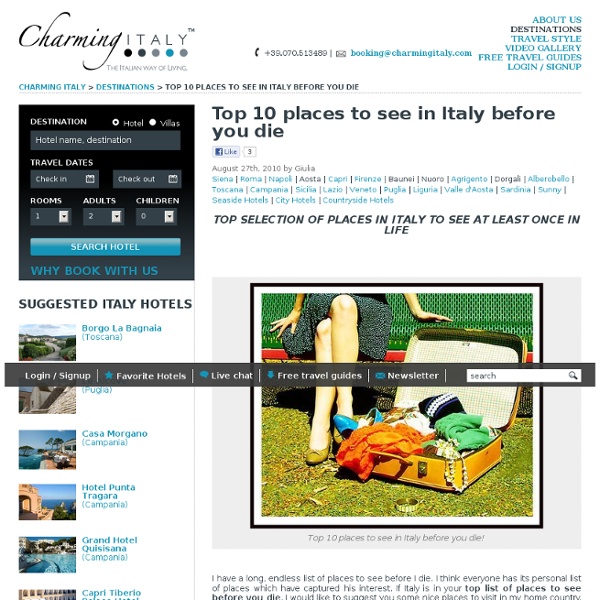 Top selection of places in Italy to see at least once in life Top 10 places to see in Italy before you die! I have a long, endless list of places to see before I die. I think everyone has its personal list of places which have captured his interest. If Italy is in your top list of places to see before you die, I would like to suggest you some nice places to visit in my home country. Here’s the top ten of not-to-be-missed places in Italy .... 1. Photos of Florence - What to see in Florence, Italy - Flickr Photo Credits: rpkelly22Florence is the first one on my places-to-see-before-you-die list and it’s not by chance. 2. St. 3. Valley of the Temples, AgrigentoWhith its 1300 hectares it is the biggest archaeological site in the world and was named World Heritage by Unesco in 1997. 4. Cala Luna, SardiniaCala Luna is maybe the most fascinating cove of the Sardinia. 5. 6. 7. 8. The Sea Stacks of Capri, Campania Capri is located in the Gulf of Naples (to be visited as well!) 9. 10. Close

Eating sunup to sundown in Bologna, Italy A typical Italian breakfast involves a simple coffee and pastries, often filled with custard, cream or chocolate. At the Fashion Cafe in Bologna, neighbors greet each other in the morning and peruse books at this modern coffee bar within a bookstore. This local Parmigiano Reggiano cheese, aged 30 months, presents complex flavors that can't be understood until tried -- and savored. How Not to Get Ripped Off Eating in Italy We’ve heard stories of tourists being ripped off at cafes or restaurants in Italy. We’ve even experienced it ourselves – paying far above the given price, being confused by service charges (and tipping ettiquette) – it’s not always the case when eating in Italy (far from it) but it is worth being aware of a few of the most common scams. These kinds of experiences can bring your whole trip to Italy down.

Fenhuan – One of the Ten Most Beautiful Towns in China By Saif on March 12, 2011 Fenhuan considered one of the 10 most beautiful cities in China. The city was founded during the Ming Dynasty (1368-1644). Originally the town was inhabited by soldiers sent to subdue the local Miao people. Check out the pictures given below. 29 Photos

Milan guide: the city's cultural secrets unveiled Milan is a city of secrets and surprises. Every time I go back for business or to see my friends and family, I am taken aback by its elegance, beauty and style. Milan is the city in Italy I feel closest to, because of its openness, its cosmopolitan outlook and its intense energy. Milan requires more effort and dedication than other Italian cities but, once discovered, the rewards are much greater than those offered on ‘easier’ trails through Rome, Florence or Venice. Five Towns of Cinque Terre Located on the Italian Riviera, Cinque Terre is a rugged coastline, made up of “The Five Lands” or the five villages: Vernazza, Corniglia, Monterosso al Mare, Riomaggiore, and Manarola. The Cinque Terre is so appealing because it does not display any modern developments in its architecture. Many of the residents over the centuries have built terraces on the cliffs that overlook the sea from the coast.

Most Colourful Places on the Globe Man-made or created by nature, some of the world's destinations are truly blessed with colors. Be it northern lights glittering in the sky, exotic birds, or gaudy neon signs, our globe is a vivid melange of shades and tints that have the power to revive your senses and wake up your imagination. Here are some of the most colourful countries on earth: Up Close, a photo from Uttar Pradesh, North Critiques | Translate rikko77 Hello Steve, good POV and framing, the use of wide angle lens enhances the big size of this beautiful building. Beautiful colors, especially the hi-key. Well done! Rikk ZZE.ST - inspiration & lifehacks to make life better Throughout last couple of years I’ve been collecting my personal favorite quotations from various inspirational people in my Evernote. As a result I got quite a long list of sayings which I personally consider to be one of the smartest, wittiest, daring and positive at the same time. Moscow, 2008.

WHEN IN ROME TOURS - A Food Lover's Top 10 List in Rome Perhaps you arrived here instead of on one of our Rome tour pages, or perhaps you just wanted to read about Rome or something else. Anyway, we hope that the following links will help you find what you're looking for! Small group Rome tours - we offer many fascinating walks through ancient Rome. Small group Vatican tours - we have several interesting Vatican city tour options available Monday - Saturday. Private Rome tours - see and learn about the Rome which many tourists miss out on. Private Vatican tours - academic walks through the Vatican city with docents of repute.

Places to stay for more than a week... by yesikalopez Mar 6