100+ Things to Know If You're Going to Italy 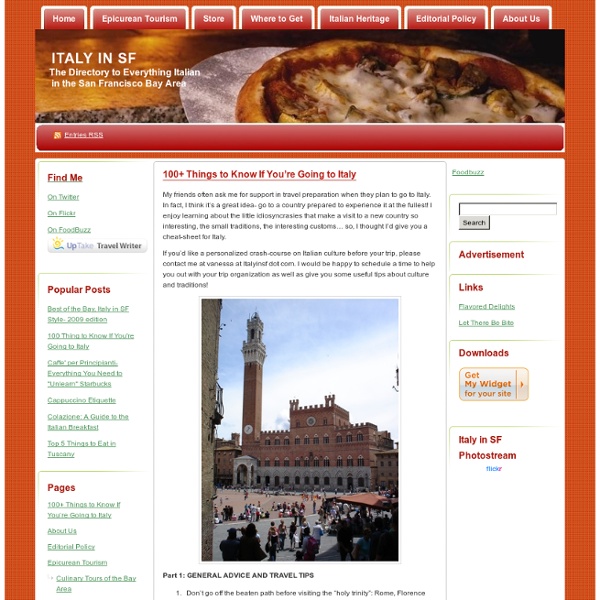 My friends often ask me for support in travel preparation when they plan to go to Italy. In fact, I think it’s a great idea- go to a country prepared to experience it at the fullest! I enjoy learning about the little idiosyncrasies that make a visit to a new country so interesting, the small traditions, the interesting customs… so, I thought I’d give you a cheat-sheet for Italy. If you’d like a personalized crash-course on Italian culture before your trip, please contact me at vanessa at Italyinsf dot com. I would be happy to schedule a time to help you out with your trip organization as well as give you some useful tips about culture and traditions! Part 1: GENERAL ADVICE AND TRAVEL TIPS Don’t go off the beaten path before visiting the “holy trinity”: Rome, Florence and Venice. Part 2: SHOPPING AND STORES When walking into a store, especially clothing or shoes, in most cases you will have a shop assistant with you at all times. Part 3: FOOD AND DRINKS Part 4: CULTURE

Europes Top 25 Castles - The Best Castles in Europe There is something about castles that inspires awe and at the same time touches a gentler, more romantic side in each of us. And if you want to visit and tour some of the best castles in the world, then Europe should be your destination as this continent certainly has more than its share. Here are the top 25 castles in Europe, in no particular order. 1. Neuschwanstein Castle For many of those that see this castle for the first time, they get a niggling feeling that Castle Neuschwanstein looks so familiar. 2. Peles Castle Known as one of the most beautiful castles in Europe, Peles Castle can be discovered in the majestic Carpathian Mountains, near the town of Sinaia, Romania. 3. Bojnice Castle Bojnice Castle is located in Bojnice, Slovakia and is one of the most delightful romantic castles in Europe. 4. Castillo de Coca Built in the 15th century by the Archbishop of Seville, the incredible Castle of Coca or Castillo de Coca is considered to be one of the best castles in Spain. 5. 6. 7. 8.

Kipnews | Knowledge is power Amalfi Coast Italy Photography Positano - a charming stop for lunch along the Amalfi Coast There’s more to Italy than Rome and Tuscany. Have you seen the Amalfi Coast? It will leave you breathless! This collection of photos is from my recent trip back to the Amalfi coast after 4 years of being away. I’ve also included some of my older original photos too in order to get an idea of what summer looks like there. Typical pottery sold along the seaside town of the Amalfi coast The cliffs of Sorrento, one of the main towns along the coast The ancient streets of Pompeii - an easy stop along the Circumvesuviana Train The hill town of Positano Cook up some dishes at Mami Camilla's cooking school near Sorrento Beach cabanas in Sorrento - a popular beach in the summer The villagers (plaster cast) of Pompeii caught in the eruption The Sorrento coastline is a boating paradise Old door in Positano Get out of Rome and visit the Amalfi Coast! For more great information on the Amalfi Cost – check out Italylouge.com

40 free things to do in New York City - travel tips and articles Seeing the bulk of New York City's biggest attractions can mean spending a hefty chunk of a trip's budget on tickets. Empire State Building? $27. The Met? $25. Free New York travelers, get busy! 1. One of Lower Manhattan's most fascinating, and controversial, stories of recent years circulates around the new African Burial Ground National Monument site. 2. Brooklyn Brewery. Free tours of Williamsburg's Brooklyn Brewery run on the hour from 1-5pm Saturday, 1-4pm Sunday. 79 N 11th St, Williamsburg, Brooklyn. 3. Imagine mosaic. It doesn't take brilliant travel minds to tell you that a park is free to visit – most parks are. 4. New York's most concentrated area for a gallery crawl is in Chelsea, mostly in the 20s Streets between 10th and 11th Avenues. 5. City Hall. Home to New York City's government since 1812, City Hall tours take in its cupola-topped marble hall, the governor's room as well as the spot where Abraham Lincoln's coffin lay in state briefly in 1865. 6. 7. 8. 9. 10. 11. 12.

20 Things I've Learned From Traveling Around the World for Three Years Gary Arndt is the man behind Everything Everywhere, one of the most popular travel blogs in the world, and one of Time Magazine’s “Top 25 Best Blogs of 2010.” Since March 2007, Gary has been traveling around the globe, having visited more than 70 countries and territories, and gaining worldly wisdom in the process. Today, I’ve asked him to share some of that wisdom. Enter Gary On March 13, 2007, I handed over the keys to my house, put my possessions in storage and headed out to travel around the world with nothing but a backpack, my laptop and a camera. Three and a half years and 70 countries later, I’ve gotten the equivalent of a Ph.D in general knowledge about the people and places of Planet Earth. Here are some of the things I’ve learned… 1) People are generally good. Many people are afraid of the world beyond their door, yet the vast majority of humans are not thieves, murderers or rapists. 2) The media lies. 3) The world is boring. 4) People don’t hate Americans. 6) Americans don’t travel.

The Most Beautiful Music Festival Locations in the World Regular readers will know that Flavorwire has a pretty sizable soft spot for the beautiful and the aesthetically appealing — from college libraries to movie theaters, from song lyric tattoos to vampire films, we’ve sought them out and rounded them up. So, with summer music festival season in full swing, it seems like a good time to survey a selection of the most beautiful places around the world where you can go to see a bunch of bands play over the course of a couple of days. Let us know what your favorites are! Sasquatch — Quincy, WA Pretty much anyone who’s ever been to Sasquatch cites it immediately when asked about the prettiest festival they’ve ever attended.

10 Best Hiking Trails in the World If everyone placing personal ads who claimed the hobby of “hiking” really did it with any regularity, the earth would have been trampled flat decades ago. But those who really do enjoy this peaceful outdoor activity have plenty of incredible choices in every corner of the world. Here are the ten best hikes on the planet, each with a combination of scenery and special extras that make them well worth going out of your way to enjoy. You can use Indie, BootsnAll’s multi-country flight finder, to search and book flights for your trip. Plan a round the world trip around these great hiking spots, and sign up for Plan Your RTW Trip in 30 Days to learn the ins and outs of planning a trip of this magnitude (it’s free!). Tongariro Northern Circuit, North Island, New Zealand It is certainly no secret that New Zealand boasts some of the world’s most beautiful and dramatic scenery, which is why it’s not surprising that one of the world’s most spectacular hikes is located on these mountainous islands.

Quit Your Job, See the World | Time to leave the office? It’s Labor Day in America, a time to celebrate the working man by…not working for a day. Unless you work in retail or fast food, in which case it’s like any other day. But what if you’d like to make every day (not)Labor Day? How about traveling around the world for six months or a year instead? Or three years like I did? he Art of Backpacking blog has a detailed story on escaping the cubicle world. Steph at Twenty-something Travel is taking off this month. The British couple running the NeverEndingVoyage blog saved 75 percent of their income and are now traveling through South America on a healthy budget of 1,200 pounds a month (plus extra for Spanish lessons and big adventure excursions). The Uncornered Market blog reminds us though that you first have to face one big question: Are you a stuff junkie or an experience junkie? If it’s the latter, you may be able to stay on the road for a decade, like HoboTraveler.