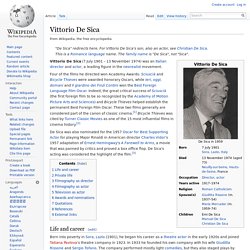 For Vittorio De Sica's son, also an actor, see Christian De Sica. Vittorio De Sica (7 July 1901 – 13 November 1974) was an Italian director and actor, a leading figure in the neorealist movement. Life and career[edit] Born into poverty in Sora, Lazio (1901), he began his career as a theatre actor in the early 1920s and joined Tatiana Pavlova's theatre company in 1923. In 1933 he founded his own company with his wife Giuditta Rissone and Sergio Tofano. His meeting with Cesare Zavattini was a very important event: together they created some of the most celebrated films of the neorealistic age, like Sciuscià (Shoeshine) and Bicycle Thieves (released as The Bicycle Thief in America), both of which De Sica directed. Private life[edit] His passion for gambling was well known. In 1937 he married Giuditta Rissone, whom he met ten years before and who gave birth to their daughter, Emi. Bicycle Thieves. Bicycle Thieves (Italian: Ladri di biciclette), also known as The Bicycle Thief, is director Vittorio De Sica's 1948 story of a poor father searching post-World War II Rome for his stolen bicycle, without which he will lose the job which was to be the salvation of his young family. 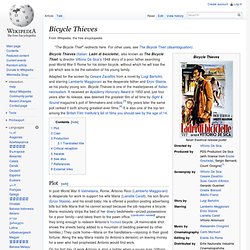 Adapted for the screen by Cesare Zavattini from a novel by Luigi Bartolini, and starring Lamberto Maggiorani as the desperate father and Enzo Staiola as his plucky young son, Bicycle Thieves is one of the masterpieces of Italian neorealism. It received an Academy Honorary Award in 1950 and, just four years after its release, was deemed the greatest film of all time by Sight & Sound magazine's poll of filmmakers and critics;[3] fifty years later the same poll ranked it sixth among greatest-ever films.[4] It is also one of the top ten among the British Film Institute's list of films you should see by the age of 14. 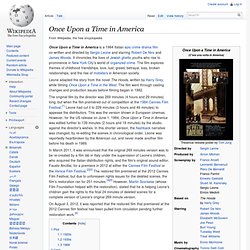 It chronicles the lives of Jewish ghetto youths who rise to prominence in New York City's world of organized crime. The film explores themes of childhood friendships, love, lust, greed, betrayal, loss, broken relationships, and the rise of mobsters in American society. Leone adapted the story from the novel The Hoods, written by Harry Grey, while filming Once Upon a Time in the West. The film went through casting changes and production issues before filming began in 1982. On August 3, 2012, it was reported that the restored film that premiered at the 2012 Cannes film festival has been pulled from circulation pending further restoration work.[6] Plot[edit] The film is presented in non-chronological order. 1920s[edit] 1930s[edit] The gang's financial success is threatened when prohibition is repealed. 1968[edit]

A Fistful of Dollars. Plot[edit] A stranger arrives at the little Mexican border town of San Miguel. 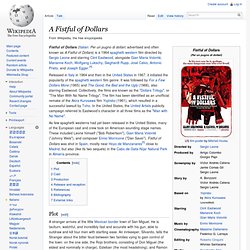 He is taciturn, watchful, and incredibly fast and accurate with his gun, able to outdraw and kill four men with startling ease. For a Few Dollars More. For a Few Dollars More (Italian: Per qualche dollaro in più) is a 1965 Italian spaghetti western film directed by Sergio Leone and starring Clint Eastwood, Lee Van Cleef, and Gian Maria Volonté.[4] German actor Klaus Kinski also plays a supporting role as a secondary villain. 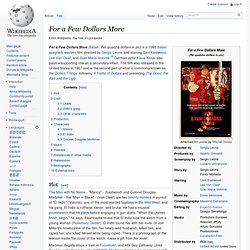 The film was released in the United States in 1967 and is the second part of what is commonly known as the Dollars Trilogy, following A Fistful of Dollars and preceding The Good, the Bad and the Ugly. Plot[edit] The Man with No Name - "Manco" - (Eastwood) and Colonel Douglas Mortimer - the "Man in Black" - (Van Cleef) are two bounty hunters in pursuit of "El Indio" (Volonté), one of the most wanted fugitives in the Wild West, and his gang. El Indio is ruthless, clever, and brutal. He has a musical pocketwatch that he plays before engaging in gun duels. Mortimer illegally stops a train in Tucumcari, and kills Guy Calloway (José Terrón), collecting a bounty of $1,000. Mortimer takes El Indio's pocketwatch. The Good, the Bad and the Ugly. The Good, the Bad and the Ugly (Italian title: Il buono, il brutto, il cattivo) is a 1966 Italian Spaghetti Western film directed by Sergio Leone, starring Clint Eastwood, Lee Van Cleef, and Eli Wallach in the title roles respectively.[3] The screenplay was written by Age & Scarpelli, Luciano Vincenzoni and Leone, based on a story by Vincenzoni and Leone. 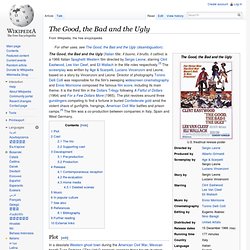 Director of photography Tonino Delli Colli was responsible for the film's sweeping widescreen cinematography and Ennio Morricone composed the famous film score, including its main theme. It is the third film in the Dollars Trilogy following A Fistful of Dollars (1964) and For a Few Dollars More (1965). The plot revolves around three gunslingers competing to find a fortune in buried Confederate gold amid the violent chaos of gunfights, hangings, American Civil War battles and prison camps.[4] The film was a co-production between companies in Italy, Spain and West Germany. Once Upon a Time in the West. Once Upon a Time in the West (Italian: C'era una volta il West) is a 1968 Italian/American epic Spaghetti Western film directed by Sergio Leone for Paramount Pictures. 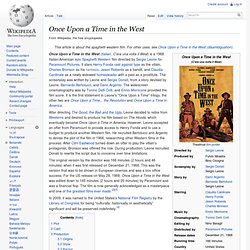 It stars Henry Fonda cast against type as the villain, Charles Bronson as his nemesis, Jason Robards as a bandit, and Claudia Cardinale as a newly widowed homesteader with a past as a prostitute. Michelangelo Antonioni. L'Avventura. Plot[edit] Anna (Lea Massari) meets her friend Claudia (Monica Vitti) at her father's villa on the outskirts of Rome prior to leaving on a yachting cruise on the Mediterranean. 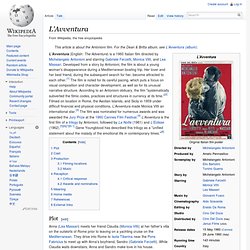 They drive into Rome to Isola Tiberina near the Pons Fabricius to meet up with Anna's boyfriend, Sandro (Gabriele Ferzetti). While Claudia waits downstairs, Anna and Sandro make love in his house. Federico Fellini. Federico Fellini (Italian: [fedeˈriːko felˈliːni]; January 20, 1920 – October 31, 1993) was an Italian film director and scriptwriter. 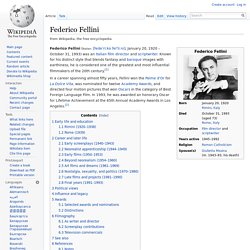 Known for his distinct style that blends fantasy and baroque images with earthiness, he is considered one of the greatest and most influential filmmakers of the 20th century.[1] In a career spanning almost fifty years, Fellini won the Palme d'Or for La Dolce Vita, was nominated for twelve Academy Awards, and directed four motion pictures that won Oscars in the category of Best Foreign Language Film. In 1993, he was awarded an honorary Oscar for Lifetime Achievement at the 65th Annual Academy Awards in Los Angeles.[2] La Strada. La Strada (The Road) is a 1954 Italian drama directed by Federico Fellini from his own screenplay co-written with Tullio Pinelli and Ennio Flaiano. 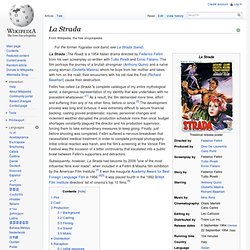 The film portrays the journey of a brutish strongman (Anthony Quinn) and a naïve young woman (Giulietta Masina) whom he buys from her mother and takes with him on the road; their encounters with his old rival the Fool (Richard Basehart) cause their destruction. Fellini has called La Strada "a complete catalogue of my entire mythological world, a dangerous representation of my identity that was undertaken with no precedent whatsoever. Subsequently, however, La Strada had become by 2006 "one of the most influential films ever made", when included in a Fellini & Masina film exhibition by the American Film Institute.[3] It won the inaugural Academy Award for Best Foreign Language Film in 1956.[4][5] It was placed fourth in the 1992 British Film Institute directors' list of cinema's top 10 films.[6] Plot[edit] The killing breaks Gelsomina's spirit.