'Sistine chapel of early Middle Ages' reopens in Rome after 30 years. A sixth-century church with a rare collection of early Christian art is reopening to the public in Rome after a restoration that took more than 30 years. 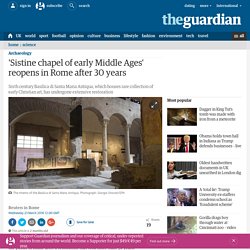 Nestling at the foot of the hill where Rome’s emperors once lived, the Basilica di Santa Maria Antiqua was buried under rubble by an earthquake in 847 and only uncovered in 1900. The interior’s frescoes of saints and martyrs, queens, popes and emperors have now been restored at a cost of about €2.7m (£2.1m), funded by the Italian state and the World Monuments Fund. “This church is the Sistine Chapel of the early Middle Ages,” said art historian Maria Andaloro, who is curating an exhibition that uses digital projections on the church’s walls. Italian police arrest dozens of Mafia suspects from female-led 'Prickly Pear Lips' gang. Italian police have arrested dozens of suspected Mafia members in an international operation to dismantle a powerful Sicilian crime group run by women. 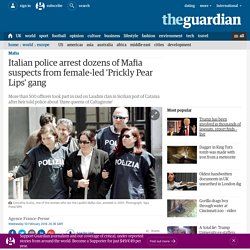 Over 500 officers took part in the raid on the Laudani clan in the Sicilian port of Catania, nicknamed “Mussi di ficurinia” (“Prickly pear lips”), in a sting that also involved forces in Germany and the Netherlands, Italian police told AFP. Three women, known as the three queens of Caltagirone, a town near Catania, had ruled the clan with an iron grip as well as governing all financial matters but were brought down by the heir to the clan who began helping police. The suspects were all wanted for Mafia association, extortion, drug trafficking and possessing illegal arms. Of 109 arrest warrants issued on Wednesday, 80 people were detained, 23 were already serving time in prison and six are still eluding capture, police said. It also faces fierce underworld competition from the increasingly powerful Naples-based Camorra and ’Ndrangheta.

Thousands gather for gay rights protest in Rome. Thousands of gay rights activists and LGBT families rallied in Rome to protest against the watering down of Italy’s civil unions bill, which no longer envisages adoption rights for homosexual couples. 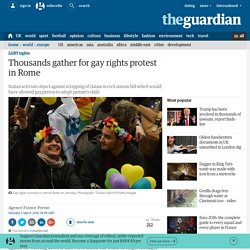 Protesters carried banners that read “We want equality” and sported the gay pride rainbow on their faces, with one man naked apart from a cardboard fig leaf with the words “civil unions” on it. Activists say the bill, which had to be cut back to the bare bones to pass in the senate and is now being examined in the lower house, is only a small step towards securing rights for homosexual families. They are particularly angry over the scrapping of a clause which would have allowed gay people to adopt their partners’ biological children – a proposal the prime minister, Matteo Renzi, was forced to dump under Catholic pressure. 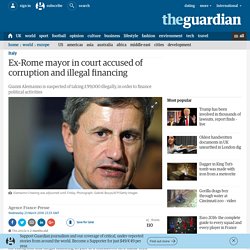 Gianni Alemanno, who was agriculture minister under Silvio Berlusconi and mayor of the capital from 2008 to 2013, is suspected of having illegally pocketed €125,000 (£99,000) to finance his political activities. “I will prove my innocence, although many have already written me off as guilty,” Alemanno told journalists at the court in Rome. In addition to the graft allegation, Alemanno has been accused of appointing former militants and his friends to city posts. Seven wonderful things to do in Italy in June. Pisa's luminara is not to be missed this month. 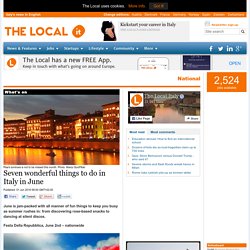 Photo: Marco Sox/Flickr. UN Refugee Agency: Over 700 Migrants Feared Dead in 3 Mediterranean Shipwrecks in South of Italy. Italy’s prime minister is picking fights with Germany and the EU. EU naval force rescues refugees from sinking ships – video. Abandoned pharmaceutical factory used as 'canvas' by street artists. 'I recognised just the tip of his nose' says mother of murdered Italian student. Rome corruption leaves Milan as 'moral capital', says Italian official. Italy couple head to the wild to 'escape modern life' The man, 50, and his girlfriend, 24, left their homes in Trieste, north-east Italy, in the Spring and headed into the spectacular nearby mountain range that borders Slovenia. 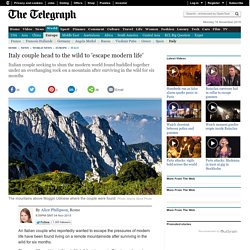 Shortly after they arrived, the unnamed woman gave birth to a baby girl, Amina, at a campsite near Portis di Venzone, 1,300m above sea level. Hunters spotted their makeshift camp and had become concerned by their increasingly emaciated appearance. Forest rangers and the local police set off to investigate on Monday and came across the couple huddled together on a bed of sticks under an overhanging rock. The pair had been living in the dank spot overlooking the town of Moggio Udinese for two weeks, surviving off berries, and relying on just their sleeping bags and a small fire to keep them warm in freezing mountain temperatures. “They weren't hermits or primitive – they were just two people who had decided upon a certain lifestyle. Italian bank robbers caught after DNA found on 'fake beard' disguises. Outgoing Rome mayor Ignazio Marino says he fears mafia infiltration.

But in the end it was alleged corruption on his part that led to his downfall. 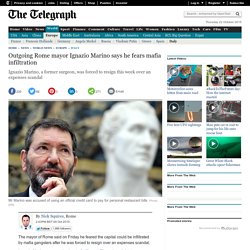 The 60-year-old mayor was accused of using an official credit card to pay for personal restaurant bills, which cost a few hundred euros. The Sant’ Egidio Community, a Catholic organisation, denied that its members had dined with the mayor, contrary to his claims, as did Vietnam’s ambassador in Rome. Instead, Mr Marino had allegedly been out to dinner with his wife and family friends. Italian Tornados to bomb ISIS in Iraq.