Impressions of ‘Nox,’ Anne Carson and poetry during O, Miami. Transcript for Poesis with Anne Carson. Jim Fleming: Our final interview in Poems Old and New is with a writer who’s constantly rearranging poetry’s furniture. 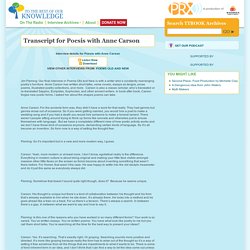 Anne Carson has written short talks, verse novels, essays as tangos, prose poems, illustrated poetry collections, and more. Carson is also a classic scholar, who’s translated or re-translated Sappho, Euripides, Sophocles, and other ancient writers. In book after book, Carson forges new poetic forms. I asked her about the shapes poems can take. Is Anne Carson the First Poet with More Fans than Readers? In 1986, a Canadian classics professor named Anne Carson published Eros the Bittersweet, a collection of erudite essays about love. 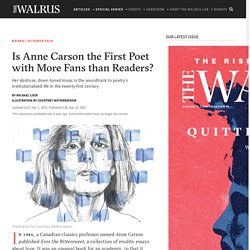 It was an unusual book for an academic, in that it reflected the half-mad presumption that someone, somewhere might be reading it for fun. “It was Sappho who first called Eros ‘bittersweet,’” Carson writes. “No one who has been in love disputes her.” Six years later, Short Talks appeared. For fans of Eros, discovering that Carson wrote poems was like finding out their beloved calculus teacher also fronted a rock band. People talk about a voice calling in the wilderness. "Nox" is a moving book - and an art object. An Interview With Anne Carson — The Penn Review. Born in Canada, Anne Carson is a poet, translator, essayist, and professor of Classics. 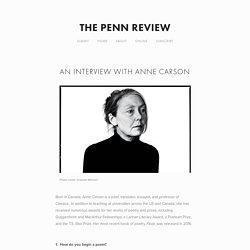 In addition to teaching at universities across the US and Canada, she has received numerous awards for her works of poetry and prose, including Guggenheim and MacArthur Fellowships, a Lannan Literary Award, a Pushcart Prize, and the T.S. Eliot Prize. Her most recent book of poetry, Float, was released in 2016. 1. How do you begin a poem? Other way around. 2. No one offers me advice much. 3. Oh no, we have no way to get back to the roots; we’re lost in the upper branches, waving around, often hopelessly, nourishment dwindling, plans awry. 4. Having more or less fallen out of fashion lately I live as a Hyperborean (those mythical people who dwell “behind the back of the north wind”). 5. (I do hope) something unexpected. 6. Evoking the starry lad her brother was. INTERVIEW:On Thursday the Canadian poet Anne Carson speaks at the Poetry Now festival. 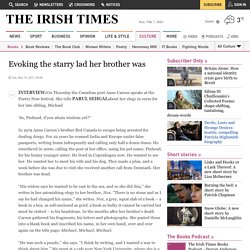 THE PAPER QUEEN: A Novel Idea, at the Hampden Gallery. Mike Hoolboom. The Aesthetic of Bookishness in Twenty-First-Century Literature. It has become fashionable, again, to talk about the death of \tthe book. 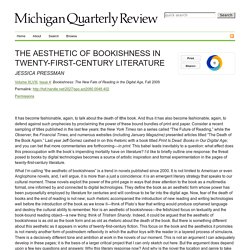 And thus it has also become fashionable, again, to ­defend against such prophecies by proclaiming the power of these bound bundles of print and paper. Consider a recent sampling of titles published in the last few years: the New York Times ran a series called “The Future of Reading,” while the Observer, the Financial Times, and numerous websites (including January Magazine) presented articles titled “The Death of the Book Again.” Last year Jeff Gomez cashed in on this rhetoric with a book titled Print Is Dead: Books in Our Digital Age; and you can bet that more commentaries are forthcoming—in print.

This babel leads inevitably to a question: what effect does this preoccupation with the book’s impending mortality have on literature? What I’m calling “the aesthetic of bookishness” is a trend in novels published since 2000. The Ludovician shark is a perfect predator for the Information Age. 1. 2. 3. 4. 5. Hayles, N. Book Review - Nox - By Anne Carson. Anne Carson’s new book comes in a box the color of a rainy day, with a sliver of a family snapshot on the front. 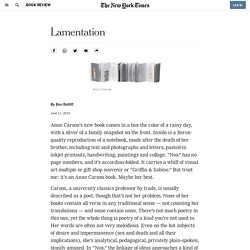 Inside is a Xerox-quality reproduction of a notebook, made after the death of her brother, including text and photographs and letters, pasted-in inkjet printouts, handwriting, paintings and collage. “Nox” has no page numbers, and it’s accordion-folded. It carries a whiff of visual art multiple or gift shop souvenir or “Griffin & Sabine.” But trust me: it’s an Anne Carson book. Maybe her best. Catullus by Night: Anne Carson’s Nox – Harvard Review. A town crier proclaimed the Valerian funeral. 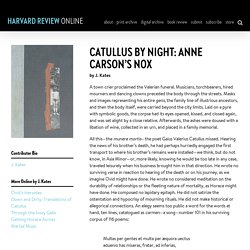 Musicians, torchbearers, hired mourners and dancing clowns preceded the body through the streets. Masks and images representing his entire gens, the family line of illustrious ancestors, and then the body itself, were carried beyond the city limits. Anne Carson, Nox – Writing with Images. This is a very unusual book: physically unusual (it’s an accordion book in a box), with an unusual collection of texts and images, and, I think, a nearly unaccountable psychology. 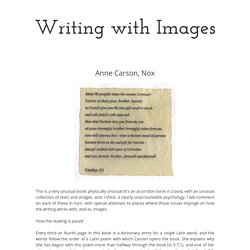 I will comment on each of these in turn, with special attention to places where those issues impinge on how the writing works with, and as, images. How the reading is paced. Float by Anne Carson – The Scores. Review by Alexa Winik. 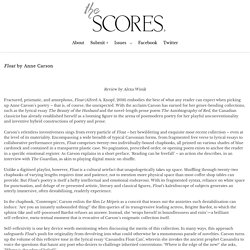 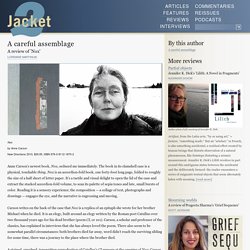 An interview with Anne Carson and Robert Currie - Asymptote. All images copyright Kim Anno. View Slideshow The images in this slideshow were created by photographer and filmmaker Kim Anno as part of a collaboration with Anne Carson. They are based on Carson's 59-part poem called “The Albertine Workout.” It focuses on Alfred Agostinelli, who is thought to be the basis for the character of Albertine Simonet in Proust’s novel, À la recherche du temps perdu. Nox by Anne Carson. Although it will not provide a representative introduction to Carson’s work for those who haven’t read her before, fans will love Nox for its honesty, occasional brilliance, and physical beauty.

FULL TEXT. Magical thinking. If it wasn't for the fact that she likes to make jokes - "I think of it as a bit of a defect" - Anne Carson wonders whether she might have become a serious philosopher. Instead, her books sit in the poetry section, where they generate mild outrage for failing to conform quite to genre. The subtitle of her latest volume, Decreation, is Poetry, Essays, Opera, and the one before that, The Beauty of the Husband, was described on the dust-jacket as "a fictional essay in 29 tangos".

This seemed to cause pain in particular to a group of male poets from Canada, Carson's birthplace, and they convened on the internet to decry her "pretentiousness". Carson is 56 and a heavyweight: the first woman to have won the TS Eliot Prize for Poetry, twice shortlisted for the National Book Critics Circle Award and made a MacArthur Fellow in 2000. The Unfolding Elegy. In 2000, Anne Carson, the Canadian poet and classicist, learned that her long-estranged brother Michael had died in Copenhagen. It took two weeks for Michael’s widow to deliver the news: she said she had had trouble finding Anne’s number among his things. Evening All Afternoon: November 2010 Archives. I've gotta tell you, Paul and Beth Garon's Woman with Guitar is a genuinely odd little volume. It's also pretty great.

Anne Carson: Translator's Mind, Artist's Brain. Anne Carson's Nox. Anne Carson’s Nox doesn’t look or behave like any other book of poetry (or prose) out there. It’s not a book in the traditional sense; the usual binary of verso and recto is confounded by one long page that accordions out of a coffin-like box.

But its physical shape isn’t the only thing that makes Nox so special; the text itself is an assemblage of words and images so artfully arranged that they make us reconsider not only what poetry can do—and should do—but even what a book is. Like B. Malvern Books. Canadian poet and classicist Anne Carson began writing and compiling Nox following the unexpected death of her brother Michael in 2000. Nox by Anne Carson. The Unfolding. “Nox” is as much an artifact as a piece of writing. The contents arrive not between two covers but in a box about the size of the New Revised Standard Version of the Bible.

Latches of Being: A User's Guide to Anne Carson.