B: Bibliography, Paleography & Theories of Texts

Manifesto: The Internet as Art. In the last thirty years, the Internet… Print is dead. Long live print. Roger Fidler is a forefather of digital journalism. 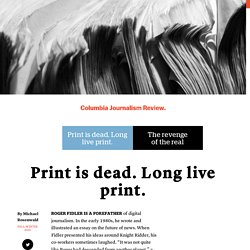 In the early 1980s, he wrote and illustrated an essay on the future of news. When Fidler presented his ideas around Knight Ridder, his co-workers sometimes laughed. “It was not quite like Roger had descended from another planet,” a colleague of his once told me, “but he was saying some things that were simply very hard to believe at the time.”

The idea he spoke of most was one Steve Jobs would have many years later—a tablet on which to read electronic newspapers. Fidler’s design and execution of a prototype were so similar to the eventual iPad that when Apple sued Samsung over design infringements, Samsung used Fidler’s early device to argue the idea was in the public domain. In Fidler’s vision of the future, news and information were headed to the nascent internet, where stories would be instantly published from one computer to millions more, eliminating the need to operate an expensive press run by expensive workers. 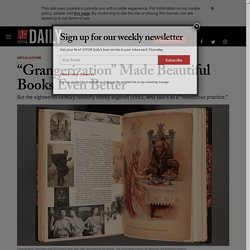 We click links to hop from an article to some other related or semi-related topic, enjoy fan fiction that remixes published stories into something totally different, or argue about an author’s ideas in our own interactive writing on social media. That’s something we could never get with a mere print book. Or is it? Gabrielle Dean, a curator of rare books and manuscripts, writes that people were doing something similar back in the eighteenth century. In 1769, amateur historian James Granger published the Biographical History of England, from Egbert the Great to the Revolution. This evolved into an entire subcultural practice, called Grangerization.

George Greenlief Evans, Illustrated History of the United States Mint. What a Book Cover Can Do ‹ Literary Hub. As a physical component of the book, the cover is a skin, a membrane, and a safeguard: paper jackets protect hardback boards from scuffing and sun damage, while paperback covers not only hold the book together but also keep its sheets clean and safe from tearing. 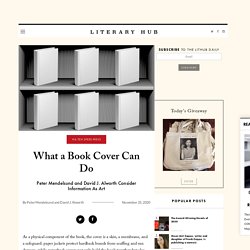 In the past, paper jackets were plain wrappers used to shield decorative bindings, but around the turn of the 20th century, illustration migrated from the boards to the jackets themselves. In a metaphorical sense, a book cover is also a frame around the text and a bridge between text and world. The cover functions simultaneously as an invitation to potential readers and as an entryway into the universe that the writer has created, whether fictional, historical, autobiographical, or otherwise.

Come, it says, join the party—or at least save the date. There are well-established visual tropes for genres such as crime, science fiction, fantasy, and romance, but all books must announce their place with respect to other books. Agatha Beins, Liberation in Print: Feminist Periodicals and Social Movement Identity – SHARP NEWS. Agatha Beins. 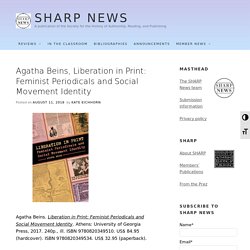 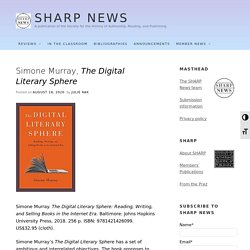 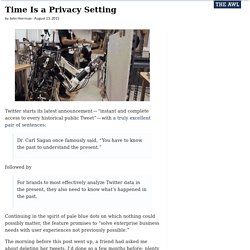 What Seamus Heaney's last text tells us about our digital lives. The Society for the History of Authorship, Reading and Publishing. The Boundary-Pushing Novelist Who's Made Twitter His New Medium. Keira Rathbone Teju Cole was stuck in traffic in Mumbai when an idea came to him. 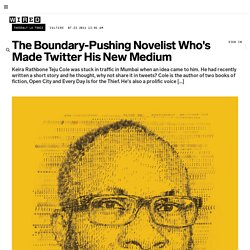 He had recently written a short story and he thought, why not share it in tweets? How I Did It: Forward First Collection Special - Eric Langley on 'Glanced' We’ve asked the five poets shortlisted for this year’s Forward Prize for Best First Collection to write about the process behind their award-nominated work. 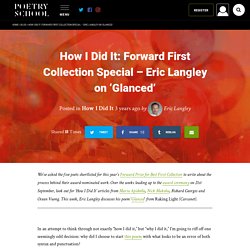 Over the weeks leading up to the award ceremony on 21st September, look out for ‘How I Did It’ articles from Maria Apichella, Nick Makoha, Richard Georges and Ocean Vuong. This week, Eric Langley discusses his poem ‘Glanced‘ from Raking Light (Carcanet). In an attempt to think through not exactly “how I did it,” but “why I did it,” I’m going to riff off one seemingly odd decision: why did I choose to start this poem with what looks to be an error of both syntax and punctuation? Carcanet Press - Raking Light. Brulezarchive. The Urgent Quest for Slower, Better News. The Fate of the News in the Age of the Coronavirus. 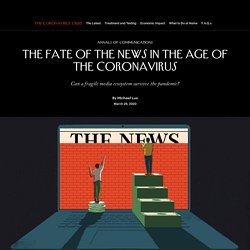 People could read up to twenty articles a month for free; beyond that, they were required to purchase a subscription plan. In an article published in the Times just before the launch, Sulzberger and Janet Robinson, then the company’s chief executive officer, explained that they were thinking about the newspaper’s long-term future. “This is not a bet on this year,” Sulzberger told the writer, Jeremy W. Does Journalism Have a Future? The Worcester Sunday Telegram was founded in 1884, when a telegram meant something fast. 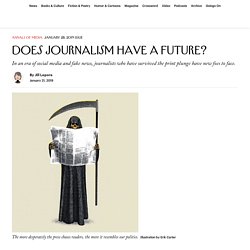 Two years later, it became a daily. Out of Print. It really was not until 1721, when the printer James Franklin launched the New England Courant, that any of Britain’s North American colonies saw what we might recognize today as a real newspaper. Franklin, Benjamin’s older brother, refused to adhere to customary licensing arrangements and constantly attacked the ruling powers of New England, thereby achieving both editorial independence and commercial success. He filled his paper with crusades (on everything from pirates to the power of Cotton and Increase Mather), literary essays by Addison and Steele, character sketches, and assorted philosophical ruminations.

The Future of Print Journalism in the Age of Digital Media. “The Power of Papers” with Mark Lorando, editor, The Times-Picayune, and vice president of content, NOLA Media Group; Mindy Marqués Gonzalez, executive editor and vice president for news, Miami Herald and el Nuevo Herald; and Norman Pearlstine, executive editor, Los Angeles Times; in conversation with Dean Baquet. This excerpt has been edited and condensed. MS. GONZALEZ I don’t want to minimize the fact that newspapers in this country are facing a serious threat, but I’d like to say that we’re so good at telling our own stories — a little too good in this instance.

We write so much about the issues that newspapers face. But left out of the conversation is the fact that the same digital upheaval that is impacting us is impacting television and cable and the music industry. The ultimate reading list from The Happy Reader’s Seb Emina. Shelley-Godwin Archive. International Image Interoperability Framework. James Joyce Digital Archive Homepage. Copyright and Permissions All of James Joyce's works published during his lifetime and everything unpublished as of 1st January 2012 (including all presently ‘lost’ or ‘mislaid’ documents) are in the public domain. Walter Benjamin Digital. Arthur Schnitzler Portal. Samuel Beckett: Digital Manuscript Project. Mojulem - Woolf Online - Home.