Facial Animation Studies with Andrew Klein. What are everybody's hair solutions? - Page 13. Quote: I know this is an old post, but the thread is still going. 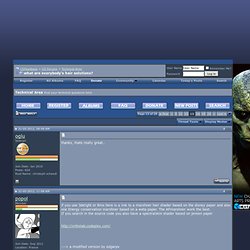 Hair and Fur Reel 2011 - Sandeep Khedkar. Neil Gaiman's The Price - An Animated film by Christopher Salmon. Many of the comments I’ve received in response to these Production Blog posts have included some very positive remarks about the behind-the-scenes details and processes I’ve attempted to convey. 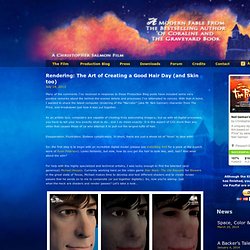 With that in mind, I wanted to share the latest computer rendering of the “Narrator” (aka Mr. Neil Gaiman) character from The Price, and breakdown just how it was put together. As an artistic tool, computers are capable of creating truly astounding imagery; but as with all digital processes, you have to tell your box exactly what to do… and I do mean exactly. It is this aspect of CGI more than any other that causes those of us who attempt it to pull out the largest tufts of hair.

Exasperation. So: the first step is to begin with an incredible digital model (please see Videoblog #04 for a peek at the superb work of Ryan Peterson). For help with this highly specialized and technical artistry, I was lucky enough to find the talented (and generous) Michael Hoopes. We’ll start with the skin. Really Need Hair Rendering tips for Maya Hair or Shave in Mental Ray.

Yeah, a lot of my trouble seems to be from the computer processing power I have available. 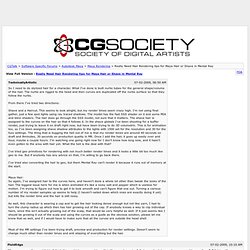 Just duel core computers, with 3-4 gigs of memory and on 32 bit windows, and we have about a weeks timeline to get everything out some how. Maxime, A likeness study. Suit Modelling & Texturing Adding some final details like Peach-fuzz and facial hairs. 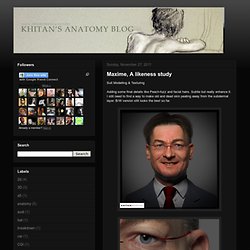 Subtle but really enhance it. I still need to find a way to make old and dead skin pealing away from the subdermal layer. B/W version still looks the best so far. Suit modelling and minor skintone tweaks adding moles and some lips enhancement EyeBrow Almost done here. Compositing in Photoshop Lensblur is a new photoshop plugins that allows you to do Zblur in a more physical correct way then before possible in photoshop. All you need is a Z-depth image from you favorite renderer. What are everybody's hair solutions? - Page 12. Cheers Oglu It was a while ago since I done this but will try to remember.. 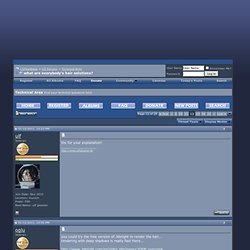 I basically created curves on one side of the head, varying in length and curvature. I then duplicated and mirrored those curves to the other side and then manually adjusting each curve to get a rough style. I used more than one hair system to assign different clumping, spread, thickness etc attributes to various hairs. So a longer more thicker system for hair on top of head and more thinned out and shorter for the sides.

I did find myself constantly adjusting the curves position/shape and swapping hair systems around on various curves, even adding more additional ones. here's a capture of the curve setup and hairsystem. Female cinematic character. The model is solid, but there are other things which seem rushed. 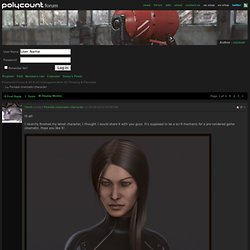 I'm not a fan of her hair, it looks too floaty, not oily enough, and her specular is too 'static', hair usually has more then a simple anistropic specular, usually two additive values that are of different colors, I don't see this going on. Try looking up for Kajya-Kay to see what I mean. Her face also fades in comparison, it looks blank, it's not defined well enough, the Diffuse is there but the micro details and specular don't read at all, not to mention, it looks she has a thick layer of dust on her face, this simply kills the looks. You should try for an Diffuse Reflectance shader instead, something like Oren-Nayar to fake the 'roughness' at light incident angles Which reminds me, all of the pictures look like there is a layer of dust on them, people usually fake depth and 'realistic' images but giving it either a slight Chromatic Aberration or DOF. 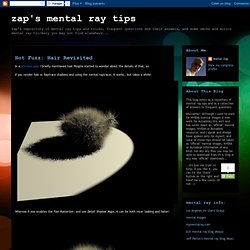 People started to wonder about the details of that, so: If you render hair w. Raytrace shadows and using the normal raytracer, it works.. but takes a while: Whereas if one enables the Fast Rasterizer, and use Detail Shadow Maps, it can be both nicer looking and faster: So the question then is... where do I turn this on? I admit some things can be hard to find, and sometimes they are renamed in the UI of a particular application... for example, the mental ray detail shadow maps are actually not named "detail shadow maps" in 3DS max, they are named "Transparent Shadows". In Maya, however, they have their proper name and are found here: Djx blog » tips for rendering maya fur with mentalray. I've been working on a project involving the use of maya fur. 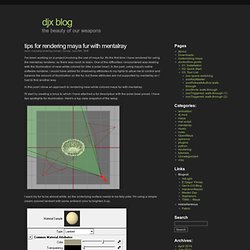 It's the first time I have rendered fur using the mentalray renderer, so there was much to learn. One of the difficulties I encountered was dealing with the illumination of near-white colored fur (like a polar bear). In the past, using maya's native software renderer, I would have added fur shadowing attributes to my lights to allow me to control and balance the amount of illumination on the fur, but these attributes are not supported by mentalray so I had to find another way.