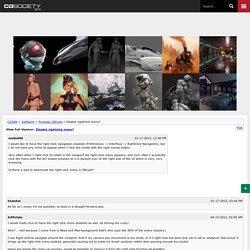 ZBrush modeling tutorial: Creating a rendered turntable video. Default Hotkeys file. As with other ZBrush configuration files, the StartupHotkeys.txt file is stored in a Public folder on your computer. 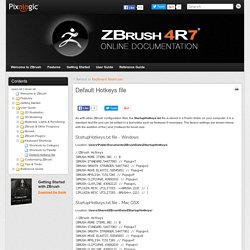 It is a standard text file and can be edited in a text editor such as Notepad if necessary. The factory settings are shown below, with the addition of the [ and ] hotkeys for brush size. [UDK] WIP Destroyed House-small env.(big pics) - Page 2 — polycount. Thanks Lycan!! 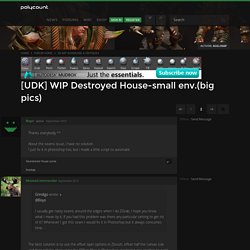 Hi everybody. I was asked for a tuto/breakdown about the making of the plaster. It's quick and dirty, I'll do a better and more in depth tuto later, but I will explain how I made both versions : This one And this one I'll explain the zbrush part, and the diffuse compositing later. WEBINAR RECAP: Array Mesh (Recap in Post 1) HelloHere is a step-by-step of the dragon piece that I completed for the most recent ZBrush Webinar - Don't Just Build It, ArrayMesh It. 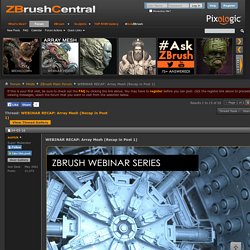 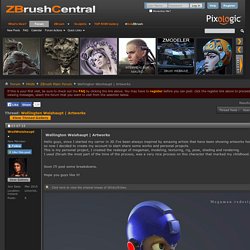 I've learnt a lot during the process, and I'm felling more fanatic about this amazing software. The model is based on the concept art from the awesome artist RiiickI used Zbrush to do modeling, texturing and BPR rendering, with composition in photoshop. I'm preparing some breakdowns and soon I'll be post it.Hope you enjoy! 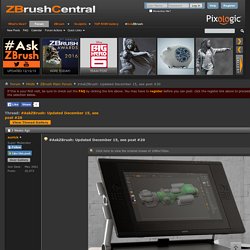 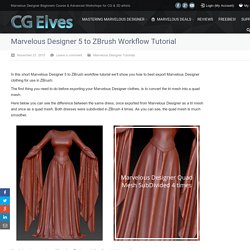 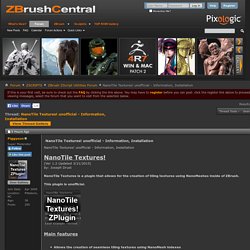 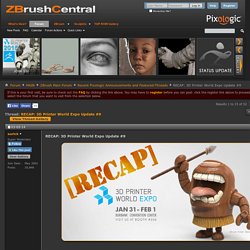 Adding to the action happening at the booth itself, the Pixologic Team was proud to present industry seminars with the likes of Legacy Effects and Neville Page (whom you can also currently see each Tuesday night on SyFy's "Face Off").Part of the action was an event where 8 leading artists from studios like Blizzard Entertainment, Sony Santa Monica, Insomniac Games, The Aaron Sims Company and many more squared off in head-to-head sculpting action to create their own "Aliens From Beyond". Their creations were printed in 3D and then shown on Facebook for community voting, with Raphael Grassetti coming away as the victor.Our cameras were rolling throughout the show and today we are pleased to bring that to you in the form of photos and recap videos.

[Solved] Scale all Subtools Zbrush at Once! It is best practice to properly set scale value for your model to match real world scale value before getting deeper in to modeling or sculpting process. If the scale of a model is not properly set prior to modeling process, then there’s a big chance to face frequent hurdles in middle of your creative work process.

Let’s assume, you’re facing similar scaling problem, which needs to rectified. If you’re working in Zbrush, scaling all subtools at once can be carried out as following way, There are several ways to scale all subtools in zbrush at once, but optimal way of doing, which I find easier, is to use zplugin named,Transpose master. Many artists might know, Transpose master as tool used for posing your sculpted model, which is what it is. ZBrush UGM with Josh Singh at Riot Games. Mummy Wraps/Bandages Technique with SliceCurve & Panel Loops. Jeremy Klein. Record_2014_08_10_12_56_00_941.mp4. HandDoodle2. BPR Batch Zbrush Script. Frank Tzeng on Gumroad. Useful small ZScripts and Macros for ZBrush 4 & 4R3. DynaMesh Master! unofficial - Information, Installation. DynaMesh Master! Unofficial - Information, InstallationDynaMesh Master!

(Ver 1.1 Updated 4/1/2013) by: Joseph Drust and Nick MillerDynaMesh Master is a plugin that allows the user to set a Desired Polycount and generate a DynaMeshed mesh. This plugin is unofficial. Main features Will automatically bake layers and clear masks before DynaMeshingWill automatically scale the mesh to the correct size to reach the Polycount*Options for Scaling up or Scaling down subtools for increased workflows * DynaMesh resolution is based on the bounding box of the subtool.

This is the progression; I started with a base mesh female that I had previously made, then did a quick concept sculpt using a combination of dynamesh and clay / clay buildup / smooth trim border / standard / move / zspheres / trim dynamic and hpolish brushes: This is about where I left off in the loose concept sculpting phase (the body anyway), then I went through and refined each piece.

3d Tutorials/Sculpts sur Pinterest. Speed sculpt. Postapocalyptic Character - Marcus - Page 5. Holdeen's Max - Workflow. 07b12cbd74e66438ecc2a9e6c4e5427f.jpg (JPEG Image, 554 × 29100 pixels) Sakaki's sketchBook & video (+ breakdown Pg 2) I have printed 148 parts by Projet HD3500. We clean up three people, including me. I was in charge of the parts from the neck down. Expert gave painting. I do not paint. I will show some tips and process.Here my custom brush.

Andrea Orioli. Create Edge Maps in ZBrush - Zbrush. ZBrush tutorial: Monster-size sculpting tips from the BBC's Planet Dinosaur. Creating dinosaurs for a TV series can be a tricky process. In my experience, deadlines are tight and most of the time you only have one shot at getting the creatures right. But with some basic planning and forethought, you can focus on creating the creatures - knowing that they will fulfil all the necessary requirements - and facilitating any changes that may be required.

Monsterous 3D modelling At Jellyfish Pictures, while working on Planet Dinosaur, it was decided that the theropods (I sculpted 27 of them) should have scaly skin, which can be time-consuming. So I planned a quick and simple character pipeline that would ensure consistent style across all the characters and enable artists to follow the same style. This is an overview of the settings, brushes and steps we used to create the dinosaurs. My Character Art video tutorial series now online!