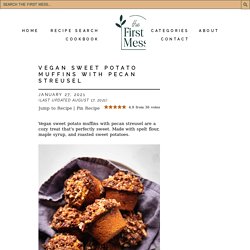 Made with spelt flour, maple syrup, and roasted sweet potatoes. It’s still the season of snow days, and cozy baking is so key. I love a seasonal and lightly sweet muffin to have with coffee and since we’re so far out from local fruit, it’s gotta be these vegan sweet potato muffins with pecan streusel. I made them with a base of light spelt flour (I use this one from Flourist), roasted and mashed sweet potatoes, maple syrup, coconut oil, and a bunch of other goodies.

The topping is held together with vegan butter (I’ve been partial to this one that’s made in Ontario lately) and coconut sugar. This muffin reminds me a bit of a coffee cake with the cinnamon and crunchy topping. I also love that this one is a solid 10-ish ingredients. Vegan Banana Nut Muffins. Vegan Cranberry Muffins - Breakfasts - ZardyPlants. Vegan Apple Cider Muffins. Healthy Pumpkin Oatmeal Muffins (Vegan, Gluten Free) - Beaming Baker. This Healthy Pumpkin Oatmeal Muffins recipe yields lightly sweet, moist pumpkin oatmeal muffins made with vegan + gluten free ingredients. 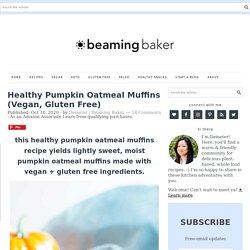 Happy Saturday! What are your plans today? Perhaps you’ll be skydiving, parasailing or…baking? Same things, obviously. Apparently, I’ve got fun and adventure on the mind and nothing, including fear of skydiving, will stop me! Healthy Vegan Apple Muffins - Veggies Don't Bite. These vegan apple muffins are not only delicious but have the best texture. 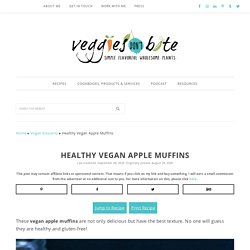 No one will guess they are healthy and gluten-free! It’s amazing how you can use simple whole food ingredients to make a treat that not only tastes good but has great texture! Pumpkin Muffins - Chocolate Covered Katie. These soft and ultra moist homemade pumpkin muffins will quickly become a family favorite recipe. 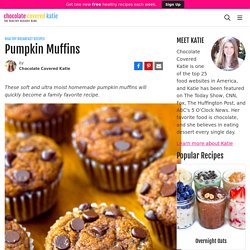 Vegan Pumpkin Muffins with Chocolate Chips are easy and festive with a soft moist texture. 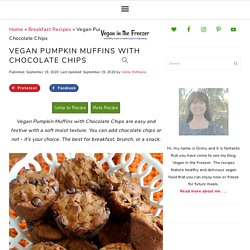 You can add chocolate chips or not - it's your choice. The best for breakfast, brunch, or a snack. Guarantee: These Vegan Pumpkin Muffins are going to be your favorite muffin for the holidays. The texture is moister in a silky kind of way. These muffins are festive, easy, and super delicious on their own or you can smear dairy free butter right down the center. Vegan Double Chocolate Muffins. Cinnamon Pumpkin Muffins. - HealthyHappyLife.com. Dive into these fluffy, moist, cinnamon-infused, cozy, plump, happy, wonderful (OK, I’ll stop) vegan Pumpkin Muffins. 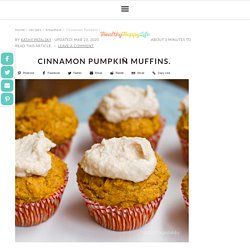 Cinnamon Coconut Frosting on top (if you’d like.) Spelt flour, soy-free, oil optional. Weekend-approved pumpkin muffin recipe for you… Frosting Optional. I added the frosting for fun, but these muffins don’t really need it to be honest. The frosting is added for kicks, but these muffins do just fine without it.. Triple Chocolate Cake Doughnuts. Oh, I've been a bad blogger, haven't I? 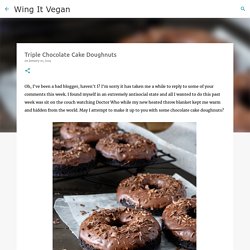 I'm sorry it has taken me a while to reply to some of your comments this week. I found myself in an extremely antisocial state and all I wanted to do this past week was sit on the couch watching Doctor Who while my new heated throw blanket kept me warm and hidden from the world. May I attempt to make it up to you with some chocolate cake doughnuts?

These are the Basic Chocolate Cupcakes from VCTOTW, but baked in a doughnut pan instead. The recipe made six doughnuts and there was enough leftover batter for three cupcakes, which I didn't mind at all. The doughnuts are soft and cakey and the chocolate topping becomes just hard enough to create a nice crisp contrast. Today's cuteness is brought to you by this insufferable weather. Vegan Baked Apple Cider Donuts Recipe - STL Cooks. Packed with cinnamon, nutmeg, and allspice, these vegan Baked Apple Cider Donuts are a perfect way to welcome in the fall. 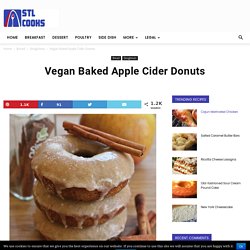 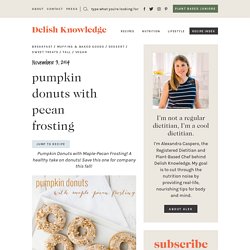 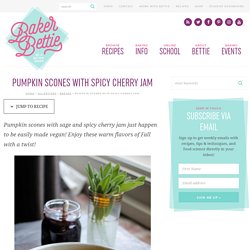 Enjoy these warm flavors of Fall with a twist! That time of year is here again. That obnoxious time, that I secretly love, where anything and everything is pumpkin spice flavored. And I hear both sides of the coin all the time. Fauna Foundation Chimps — Pumpkin Pie Muffins. Chocolate Chunk Pumpkin Scones. Vegan Pumpkin Spice Scones. Creamy Vanilla Bean Frosted. - HealthyHappyLife.com. These vegan Pumpkin Spice Scones with real vanilla bean cream cheese frosting are a new fall favorite of mine. I don’t make scones often since traditional scones are loaded with butter. But scones can easily be slightly lightened up and veganized. All while still making your scones swoon-worthy! And these dreamy triangle scones had us craving coffee. Lattes. These fluffy, soft, vegan buttery scones are infused with real pumpkin, accents of cinnamon, nutmeg and vanilla bean.

BoOoOoOo. I used to love Halloween. My friend Anna and I would start talking mid-summer about what our costumes would be. My favorite costume was a garden gnome, for which I wore green tights, an oversized blue shirt (that I rubbed with bronzer so it would look dirty), a doctored santa hat (took out the white sections), and a beard. For the past few years I haven’t done much for Halloween. I was planning on sharing this recipe next week, but sharing a pumpkin recipe on Halloween just felt RIGHT. Ha, just kidding, I eat pumpkin things all year, but apparently it’s socially acceptable to eat pumpkin between September-Thanksgiving. I also don’t subscribe to the idea that scones need to be dry. In my version, I used all whole wheat flour, a touch of maple syrup for sweetness, and coconut oil in place of butter. I used 2 glazes so the scones would have that Starbucks look, but because of that there’s a good amount of sugar going on here.

Easy Pumpkin Spice Muffins » The Glowing Fridge. This morning I woke up to cooler air and cloudy gray skies which immediately put me in the mood to bake and sip on hot pumpkin coffee. With my favorite pumpkin scented soy candles burning in the background, it very much felt like a cozy Autumn day. The leaves are falling, people are starting to wear layers and pumpkin everything is everywhere. Rum Spiced Soft Pumpkin Muffins — Produce On Parade. Okay, I have two pretty neat and equally exciting things to share today. Number one, we have over 500 likes on Facebook! Must be all those Alaskan pics. Cool beans, huh? Vegan Pumpkin Chocolate Chip Muffins. Wowee. Vegan Pumpkin Muffins with Streusel Topping. - The Pretty Bee.

Healthy Pumpkin Scones with Maple Glaze- Cookie and Kate. Never miss a recipe. Glazed Pumpkin Donut Muffins (Vegan) - Baker by Nature. Vegan Pumpkin Oatmeal Muffins - Hummusapien. Vegan Banana Dark Chocolate Steel Cut Oat Muffins. Simple Vegan Chocolate Chip Muffins - Simple Vegan Blog. Whole Wheat Cranberry-Orange Muffins. My mother in law, Her Ladyship, likes to eat one of these Whole Wheat Cranberry-Orange Muffins for breakfast every morning. I have been baking a batch of these muffins for her once a week since 2008. Before that, I used to bake her a weekly batch of chocolate chip breakfast muffins, but ever since Her Ladyship's little pup came into her life she switched to cranberries in case puppy wants to steal a bite. Lord Pookie McCuteFace is always stealing bites of things. Mostly food, sometimes socks. Vegan Chocolate Chip Muffins - HealthyHappyLife.com. Vegan Spiced Carrot Muffins. One of the most popular posts on my blog is a recipe for Hearty Spiced Carrot Muffins.