How To Grill Baby Back Ribs. Fried Pig Ears with Hot Sauce Recipe. For the pig ears: Place the pig ears, carrots, garlic, celery, bay leaves onions and thyme in a large pot, and cover with water. 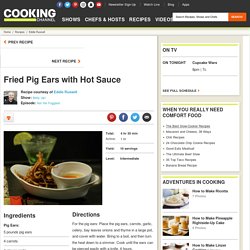 Bring to a boil, and then turn the heat down to a simmer. Cook until the ears can be pierced easily with a knife, 4 hours. For the hot sauce: Meanwhile, preheat the oven to 350 degrees F. While the ears cook, roast the garlic, peppers, jalapenos, onions, habaneros and bay leaf, 45 minutes. Place all of the roasted ingredients in a large pot and cover with the vinegar and 1 gallon water. Remove the ears from the stock, discard the vegetables and reserve the stock for later use. In large pot heat the oil over medium heat until a deep-frying thermometer inserted in the oil reaches 350 degrees F. Miso Caramel Recipe on Food52. Cooking is more fun with friends. 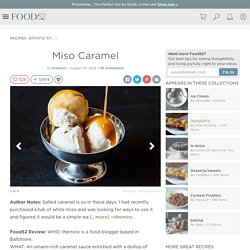 Find your friends who are already on Food52, and invite others who aren't to join. Let's GoLearn more Join Our Community Follow amazing home cooks. For the Crispiest Chicken (and Turkey) Skin, Grab the Baking Powder. [Photograph: J. 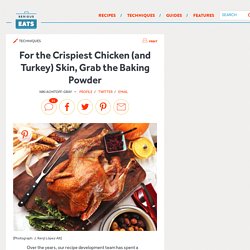 Kenji López-Alt] Over the years, our recipe development team has spent a lot of time tackling the best ways to cook poultry. Want the fastest and most evenly cooked whole bird? Spatchcock that baby. Looking for the juiciest, most tender boneless, skinless grilled breasts? You Are Going to Want to Bake Those Pork Chops, My Friend. Photo Have questions about recipes, cooking and food? 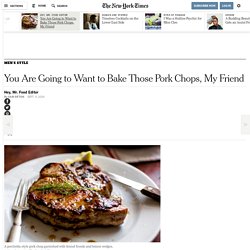 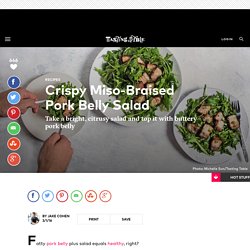 Make Ahead BBQ Baby Back Ribs Recipe. Tastingtable. May is Grilling Month at Tasting Table. 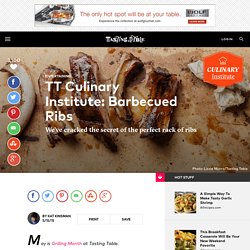 Want great ribs? You're gonna have to get a little messy. And if you're Tasting Table's food editor Andy Baraghani, that's half the reason to grill a slab. "They're so good, because the rub penetrates the meat, and it soaks up the smoke and the mop sauce. Then you get to eat them in a primitive way—with your hands—that makes them taste even better," he says. But when it comes to actually cooking the ribs, Andy is modern and precise about his method, which minimizes grill tending in favor of a few steps that ensure deeply flavorful, exquisitely tender meat every time (see the recipe). 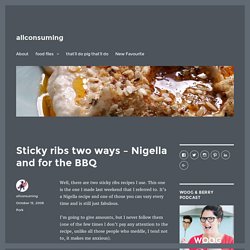 This one is the one I made last weekend that I referred to. It’s a Nigella recipe and one of those you can vary every time and is still just fabulous. I’m going to give amounts, but I never follow them (one of the few times I don’t pay any attention to the recipe, unlike all those people who meddle, I tend not to, it makes me anxious). Kung Pao Ribs. Looking for a flavor-packed new way to play with your pork? 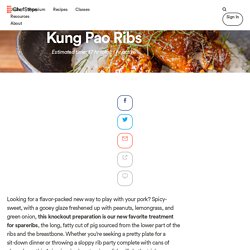 Spicy-sweet, with a gooey glaze freshened up with peanuts, lemongrass, and green onion, this knockout preparation is our new favorite treatment for spareribs, the long, fatty cut of pig sourced from the lower part of the ribs and the breastbone. Whether you’re seeking a pretty plate for a sit-down dinner or throwing a sloppy rib party complete with cans of cheap beer, this Asian-inspired centerpiece dish will do the trick. Before we slowly cook the ribs sous vide, we lightly dust them with salt, which helps the meat maintain a little firmness even as it transforms into a succulent, melt-in-your-mouth wonder. Crispy Buttermilk-Soaked Pork Chops. Sous Vide Pork Tenderloin Recipe. BBQ Pork Belly. Print RecipeJump To Recipe As we started to feel the chilly autumn air in the evening I realized that the end of summer is quickly approaching in the Northern Hemisphere. 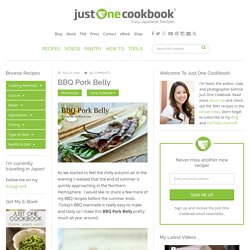 I would like to share a few more of my BBQ recipes before the summer ends. Today’s BBQ marinade is really easy to make and tasty so I make this BBQ Pork Belly pretty much all year around. For barbequing pork belly, I highly recommend to use an outdoor grill so that the extra fat will melt off and the finished product won’t be as oily. We used juicy and soft pork belly meat but you can replace it with other meat such as beef or chicken to enjoy with the marinade. By the way, I would like to thank you for the kind comments for my son’s first day of 1st grade. Hope everyone will have a great week and enjoy the remainder of the summer! Cotoletta alla Palermitana. Have you ever heard of cutlets “Palermo style” (alla Palermitana)? 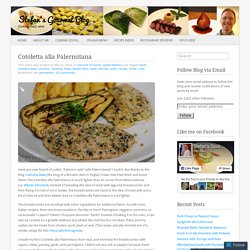 I hadn’t. But thanks to the blog Culinaria Italia (the blog of a Brit who lives in Puglia) I have now tried them and loved them! The Cotoletta alla Palermitana is much lighter than its cousin from Milano/Vienna (i.e. Wiener Schnitzel). Instead of breading the slice of meat with egg and breadcrumbs and then frying it in lots of oil or butter, the breadcrumbs are stuck to the slice of meat with just a bit of olive oil and then baked. The breadcrumbs are enriched with other ingredients for additional flavor.

Pork Chops in Piquant Sauce. The best pork chops are those that are marbled with fat, as the fat provides flavor and prevents the chops from drying out. For this recipe I used some pork chops from iberico pig, the same Spanish pork that is used to make the famous jamón. The best part of this recipe is the piquant sauce, which was inspired by a recipe of Biba Caggiano. With tomatoes, olives, capers, onions, and just a touch of cayenne pepper, it is loaded with flavor. Nick Stellino - Sausages Country Style. Ingredients: 4 tablespoons olive oil 8 Italian sausages (hot) 1 red bell pepper, cut into strips 1 yellow bell pepper, cut into strips 1 medium onion, sliced 6 cloves garlic, thickly sliced 2 tablespoons chopped fresh Italian parsley 2 teaspoons chopped fresh rosemary ½ (one half) cup white wine 1can (14 ½ oz.)

Looking for a recipe rich with tradition but not tied to it? Helene An is the matriarch of a restaurant empire, with five restaurants throughout California, including Crustacean Beverly Hills. She's known as the "mother of fusion" for the way she's brought together Vietnamese, French and California farm-to-table. Hell, her last name means "to eat" in Vietnamese.

This recipe from her cookbook An: To Eat: Recipes and Stories from a Vietnamese Family Kitchen is a shining example of her signature style. It's also a relatively simple one. Slow-roasting is a kitchen secret weapon that packs all the flavor of four hours slaving away in the kitchen, without the actual slaving. Pork Chops with Apricots. This dish is packed with so much flavor, you’ll be amazed that it uses so few ingredients—and just a single fry pan, which makes it a winner for One Pot Wednesdays.

You can substitute other stone fruits, such as peaches and plums, for the apricots, and you can also use bone-in pork chops (although they will take a bit longer to cook). How to cook perfect pulled pork. Like the Ugg boot or the skinny jean (or, indeed, the irritating sartorial singular), American food is a trend which refuses to die. How to cook perfect pulled pork. Miso Braised Pork. Juicy pork, mushroom supper uses only one pan for easy cleanup. How to Make Crispy Pork Belly—It's Easier than You Think.

CROCKPOT PORK CARNITAS. You all know how much I love my Crockpot. Roast pork belly with crackling Recipe - British. Frank Camorra's miso pork belly. SBS - Search results for barbeque pork belly. Super-Simple, Oh-So-Tender Braised Pork Belly. To paraphrase Magritte, “Ceci n’est pas un plat.” For those of you who slept through French (not to mention art history) class: This is not a dish. Nope. The easiest pork chop recipe ever — just add salt, and bake. When you want to make things easy, just grab some salt for your pork chops. Two ingredients are all you need to make a delicious dinner. Just sprinkle the chops with rock salt, bake them in the oven until golden brown, and dinner is ready.