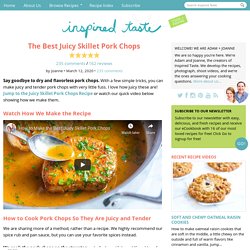 With a few simple tricks, you can make juicy and tender pork chops with very little fuss. I love how juicy these are! Jump to the Juicy Skillet Pork Chops Recipe or watch our quick video below showing how we make them. Watch How We Make the Recipe. Food & Wine. The Best Fall Grilling, Portuguese-Style - WSJ. The Best Fall Grilling, Portuguese-Style - WSJ. Pork with Fennel and Pancetta. Pork Chops With Herb-Mustard Butter Recipe. Slow-Cooker Pork With Noodles Recipe. Sausage & Apple Casserole with Dumplings. Sausage lovers rejoice as British Sausage Week gives you the celebrate the great British banger! 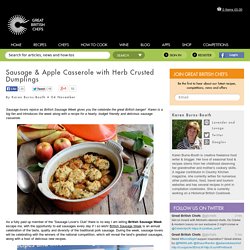 Karen is a big fan and introduces the week along with a recipe for a hearty, budget friendly and delicious sausage casserole. As a fully paid up member of the “Sausage Lover’s Club” there is no way I am letting British Sausage Week escape me, with the opportunity to eat sausages every day if I so wish! British Sausage Week is an annual celebration of the taste, quality and diversity of the traditional pork sausage.

During the week, sausage lovers will be celebrating with the winners of the national competition, which will reveal the land’s greatest sausages, along with a host of delicious new recipes. Not only do I love the humble British banger for its taste, texture and flavour, but I also rate it as a fabulous “frugal family meal plan” ingredient, and many a comforting “the week before pay day” meal has been made with a packet of sausages. Ten Top Sausage Facts 1. 3. 4. 5. 6. 9. 10. Method: Pork and Fennel Ragout Recipe. Directions Grind the fennel seeds with 1 teaspoon salt and 1/2 teaspoon pepper in a spice grinder or chop with a knife. 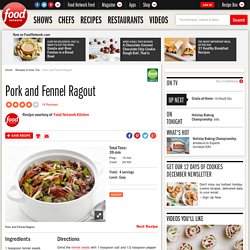 Transfer to a medium bowl; mix with the lemon juice and pork. Add the flour and toss to coat. In another bowl, mix the lemon zest with 2 tablespoons parsley. Heat a deep skillet or pot over high heat and add the olive oil. Add the mushrooms, wine and 1/2 cup water; scrape up any browned bits. Per serving: Calories 435; Fat 18 g (Saturated 4 g); Cholesterol 62 mg; Sodium 882 mg; Carbohydrate 24 g; Fiber 4 g; Protein 30 g. 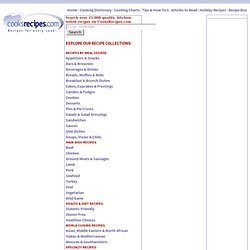 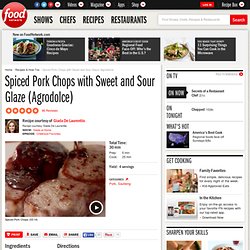 Season the pork chops with salt and pepper, to taste, and sprinkle with the red pepper flakes. Add the pork to the pan and cook until cooked through. for about 5 to 6 minutes on each side, or Remove the pork from the pan, cover loosely with foil, and set aside. Easy Slow-Cooker Pulled Pork Recipe. Slow Cooker Texas Pulled Pork Recipe. Spanish-Style Brined Pork Tenderloin Recipe. 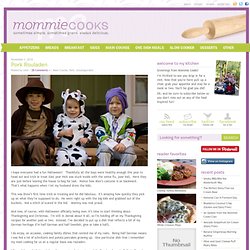 Thankfully all the boys were healthy enough this year to head out and trick or treat (last year Nick was stuck inside with the swine flu, poor kid). Here they are just before leaving the house to beg for loot. Notice how Alex’s costume is on backward. This was Drew’s first time trick or treating and he did fabulous. And now, of course, with Halloween officially being over, it’s time to start thinking about Thanksgiving and Christmas. I do enjoy, on occasion, cooking family dishes that remind me of my roots.

I figured it was high time I shared our version, but seeing as I don’t eat red meat all that often, I substituted pork in the place of it’s traditional counterpart. Ingredients Needed: 1 Pd. of Pork Cutlets 1 Onion, Chopped 4 Pieces of Bacon, Cut in Half 4 tsp of Dijon Mustard 4 Dill Pickles Salt Pepper Paprika 1 Tbsp of Oil 1 Cup of Water 1 Tbsp of Corn Starch Now it’s time to load them up with the good stuff. Pork Souvlaki with Tzatziki. I’ve been holding out on you. Earlier this year I was thumbing through the March issue of Food & Wine magazine, when I came across this recipe for Pork Souvlaki & Tzatziki.

It stuck out for two main reasons. First, was the presentation. Souvlaki, a classic Greek dish of marinated and cubed pork or lamb, is usually cooked with onions on a skewer. This Food & Wine interpretation dispensed with the pesky skewers and called for sautéing the meat and onion in a cast-iron skillet. Secondly, the recipe just seemed flavorful and easy. Since first making it back in March, this recipe has become one of favorite finds of the year. Best Ever Sausage with Peppers, Onions, and Beer! Recipe.