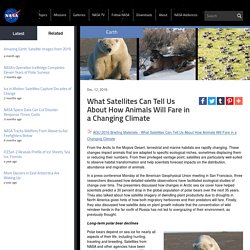 These changes impact animals that are adapted to specific ecological niches, sometimes displacing them or reducing their numbers. From their privileged vantage point, satellites are particularly well-suited to observe habitat transformation and help scientists forecast impacts on the distribution, abundance and migration of animals. In a press conference Monday at the American Geophysical Union meeting in San Francisco, three researchers discussed how detailed satellite observations have facilitated ecological studies of change over time. The presenters discussed how changes in Arctic sea ice cover have helped scientists predict a 30 percent drop in the global population of polar bears over the next 35 years. Beaked whales may evade killer whales by silently diving in sync. Beaked whales have a killer whale problem. 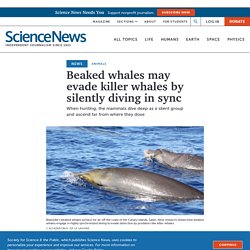 More formidable whales, of the sperm or pilot variety, have the size and muscle to flee or defend against a killer whale, an ocean superpredator. Smaller prey, like dolphins, can find safety by swimming in large pods. Certain toothed whales even communicate in pitches killer whales can’t hear. But elephant-sized beaked whales, named for their pointy snouts, have none of these advantages. These extreme divers swim in small groups, are too slow to outswim a killer whale, and rely on audible clicks to echolocate food deep in the ocean. Fragrant Nature-Preise-Vivamundo Reisen. Wolves regurgitate blueberries for their pups to eat. The animals harmed by superstition. Fragrant Nature-Übersicht-Vivamundo Reisen. Zimmer. 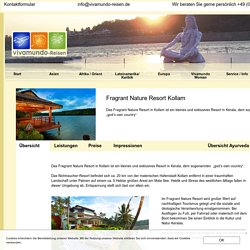 10 Remarkable Facts About Animals Put In Human Perspective. We all know that our cat can jump high and our dog can smell well, but sometimes it’s hard to appreciate just how amazing their abilities really are. 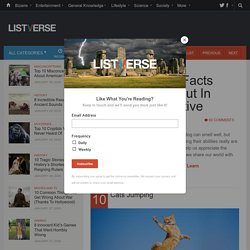 Putting the numbers into a human context can help us appreciate the superhuman capabilities of some of the animals we share our world with. See Also: Top 10 Real Superpowers You Can Learn. 10 Hilarious Wildlife Encounters. Everyone has a funny wildlife story or two to tell, and the Internet and social media are always full of “cute” animal posts. 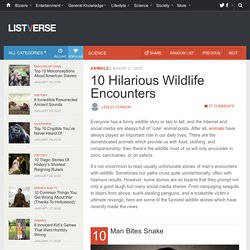 After all, animals have always played an important role in our daily lives. There are the domesticated animals which provide us with food, clothing, and companionship; then there’s the wildlife most of us will only encounter in zoos, sanctuaries, or on safaris. A chimpanzee cultural collapse is underway, and it's driven by humans. Language, music, and art often vary between adjacent groups of people, and help us identify not only ourselves but also others. 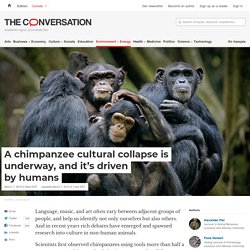 And in recent years rich debates have emerged and spawned research into culture in non-human animals. Scientists first observed chimpanzees using tools more than half a century ago. As this complex behaviour appeared to differ across different populations, researchers concluded that tool use in apes was socially learned and therefore a cultural behaviour. Fragrant Nature Resort, Kerala, India - Ayurveda Treatment Packages. Fragrant Nature Resort offers wellness holidays away from the hustle and bustle of city life.

It nestles amongst graceful palms, on five acres of beautifully landscaped, waterside land, on a breathtakingly beautiful and serene lake. "Prana", the spa at Fragrant Nature offers a wide range of Ayurveda treatments. 'Aroma Fresh' is the hotel's horticulture wing, which has a retail network of food stores across South India. Animal magnetism: Stunning Steve McCurry photos show the complex relationship between humans and animals.

Steve McCurry has been one of the most respected names in contemporary photography for more than forty years. 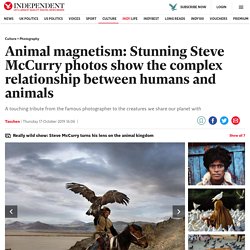 Animals discovers a different side to the photographer who skilfully explores their complex relationship with humans and the environment. Tenderness abounds, particularly in scenes of street dogs sleeping contentedly next to a human. But there’s also a kind of essential solitude, with animals belonging to no one and simply wandering through life with only their survival instincts to guide them. Download the new Independent Premium app Sharing the full story, not just the headlines. Why The Lion King is so wrong about the African savannah. It’s got everyone’s favourite farting warthog, graceful giraffes, lumbering elephants and a whole cast of realistic-looking animal characters. 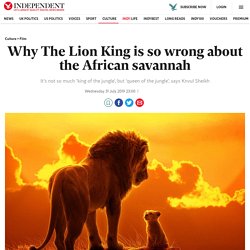 Watching Simba and his pals try to regain their rightful place in the kingdom may have you thinking that Disney’s The Lion King is a pretty accurate depiction of what happens in the African savannah. But it’s no nature documentary. Real lions don’t rule over other creatures. From head bobbing to hopping, why animals sometimes appear as if they're dancing. A pigeon bopping along to a busker playing “Blurred Lines” by Robin Thicke and Pharrell Williams set Twitter abuzz recently. 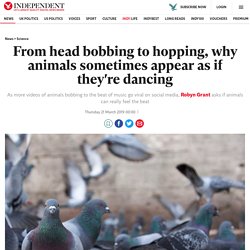 It’s certainly a catchy tune that I can’t help but tap my foot along to, but is that really what the pigeon is doing? This pigeon seems to hop to the beat on one foot, or he may only have one leg. Fabulous India. The Strangest Animal Found in Each State. Arizona: Javelina Dennis W Donohue/Shutterstock Javelinas, also known as a collared peccary, are often confused for wild pigs thanks to their stumpy legs, porcine-like snouts, and tendency to communicate in snorts. 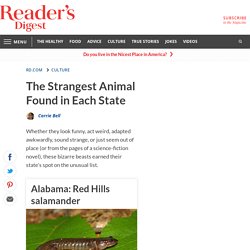 But according to the Arizona-Sonora Desert Museum, these “new world” herbivores/frugivores (fruit eaters) are distinguished from their “old world” lookalikes by numerous physical features including a scent gland in their rump that they rub on rocks and stumps to mark territory and on each other for identification. Pigs, on the other hand, lack scent glands. New Koala App Helps Protect One of Australia’s Most Famous Animals. SYDNEY - A new koala-tracking app and a marsupial hospital are the latest moves to protect one of Australia’s most famous native animals. The furry, tree-dwelling marsupials are in decline in eastern Australia, and authorities hope a multi-million dollar rescue plan will help to save them.

The app will help authorities map and track koala populations in New South Wales state, where the furry marsupials are in decline. Members of the public as well as researchers are encouraged to report koala sightings using the technology. The koala faces various threats, including loss of habitat, disease, road traffic accidents and attacks by dogs. Cotigao Wildlife Sanctuary and National Park. By Niladri Bose | Last updated July 21, 2019 Cotigao Wildlife Sanctuary is a nature reserve in South Goa bordering the state of Karnataka. The main gate of the sanctuary is 30 kilometers from Polem beach by the NH 66, and 22.5 kilometers from the popular Palolem resort area. Spread over 86 square kilometers, Cotigao is the 2 nd biggest forest area in Goa after Bhagwan Mahavir Wildlife Sanctuary. Established in 1968, it was set up to preserve the rich biodiversity of the area, and conserve the many floras and fauna species.

Wildlife Sanctuary vs. National Park. — In India, there are 103 National Parks (with a few proposed) and 537 wildlife sanctuaries (source), out of a total of 733 protected areas. While both serve the purpose of protection of wildlife, there are some key differences between the two. The biggest difference between these two Protected Areas is the restriction in entry. Wildlife Sanctuaries allow certain activities to be conducted within its premises, like foraging, collection of firewood from fringe areas, scientific research and if required, hunting.

In National Park, no human activity of any kind can be pursued. Tourism is allowed strictly in the buffer zones and the core zone is completely off-limits except for trained personnel of the National Park. Steering a tricky course: is rapid development destroying the Keralan way of life? I'm lying on my back. It's night and a tropical rain shower is pattering gently on the thatched coconut leaves. Lovely. But there is something else too: a skittering and rustling sound. A creature is moving quickly across the roof. Your Dog's Big Milestones Past Puppyhood. Puppies - Cute Pictures, Facts, And Tips For Adoption - DogTime. (Picture Credit: Mica Ringo/Getty Images) Dog may have set 'new world record' after giving birth to 21 puppies naturally. Wolf Puppies Are Adorable. Then Comes the Call of the Wild.

HuffPost is now a part of Verizon Media. HuffPost is now a part of Verizon Media. Taking Your Dog & Pets By Ferry. What Is the Best Flooring for Dogs and Other Rambunctious House Pets? Pet theft is on the rise, with more than 60 dogs stolen in the UK every week. Owning a dog tied to lowering your risk of dying early by 24%, says science. ‘Crazy cat ladies’ do not exist, scientists say. Cat power: How to stroke your furry friend, according to science. Humans have altered dogs' brains, research finds. New Bird of Paradise Species Confirmed in New Guinea. Popular wildlife experiences in New Zealand. Top 25 Wildlife Sanctuaries in India. 18 Places You Need To Visit For The Best Wildlife Experience in India. 25 Different Types of Birds with Names and Pictures. 23 Different Types of Birds With Pictures. Types of Birds: Bird Families From All Around The World - Pictures & Facts. Personal Finance News, Investing Advice, Business Forecasts-Kiplinger.

New Federal Rule Would Reduce Protections for Water in the West, Harming People and Birds. Cryptic Seabirds Can Hide From This Scientist, But Not From Her Spy Network. 5 Most Adorable Pets That One Can Own - The News Geeks (TNG) Calgary company offers pet owners a forever keepsake of their pets. RSPCA Victoria – Keeping your pet cool during summer. 10 Cute Teacup Dog Breeds. Cochin International Airport Ltd: Pets can't be flown in via Kochi airport: Customs. This Bird Lives Nearly Its Entire Life in the Air. How birds fly. Finch's Bite Is 320 Times More Powerful Than T. Rex's. Why Are There So Many Pigeons? 'Phantom' Archaeopteryx, One of the World's 1st Birds, Could Probably Fly. When It's Okay (or Not) to Feed Birds. A Birds First Phrase - Pets Health Foods. 10 amazing birds that have gone extinct.

Running with your dog can keep you fit, but needs to be done responsibly. What to Buy Before Adopting a Dog: Reviews by Wirecutter. Thewirecutter. How to care for small pets when it's hot. Vetmed.illinois. Electric shock collars for pets to be banned in England. Your Essential Oil Diffuser Could Make Your Pets Sick. The Bukit Brown Experience. British pet shops to be banned from selling puppies and kittens. You're Feeding Your Cats All Wrong. Do Dogs Get Embarrassed When We Dress Them Up?