Steering a tricky course: is rapid development destroying the Keralan way of life? 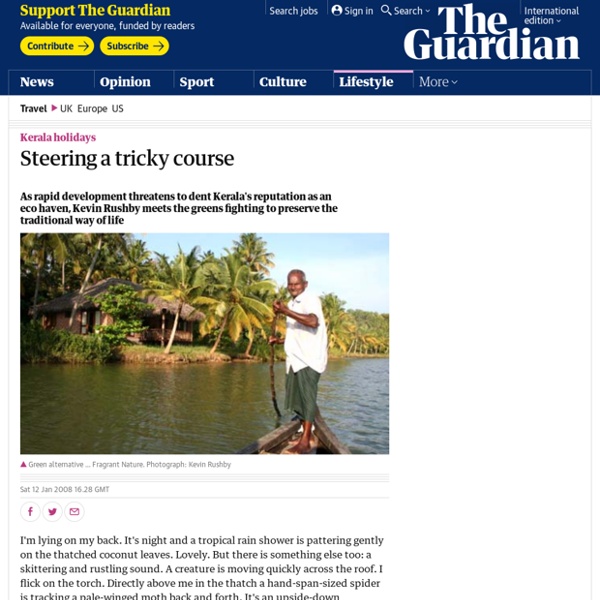 I'm lying on my back. It's night and a tropical rain shower is pattering gently on the thatched coconut leaves. Lovely. But there is something else too: a skittering and rustling sound. A creature is moving quickly across the roof. I flick on the torch. Like an antelope on the savanna, oblivious to the approaching lion, the moth stops and - dies in the predator's jaws. In the morning my friend Raj is pleased to hear of giant arachnids in his roofs. He takes me on a tour of the hillsides, scrambling up to the viewpoint from where we can see Kerala stretched out beneath us, a sea of coconut trees with hardly a break. "Don't be misled by the view," Raj warns me. He's not the only one to think so. Even just a decade ago India appeared to be a country with impressive green credentials. Travelling down from Raj's place in the hills towards the coast, the problems are obvious. Poovar is a place that has, as yet, escaped the worst excesses of development. "Where will you go?" He shrugs.

Here's What It Takes to Become a Professional Travel Photographer When I was just eight years old I would flip through the pages of National Geographic and imagine being a photographer in Africa. I was captivated by the faces and places that seemed worlds apart from my typical Middle American hometown. Fast forward years later, and I'm living the dream as a travel photographer working throughout Africa and Europe. If you've ever wanted to travel the world with your camera, here's my advice to help you get started and thrive in professional travel photography. What is Travel Photography? Commercial travel photography provides imagery for the $1 trillion global tourism industry.

Feast On Traditional South Indian Dishes At Southindies in Bengaluru Traditional South Indian food hits the streets of Bengaluru with the Big Fat South Indian Feast at Southindies in Bengaluru. The authentic tastes and flavours of the four major Southern states will be on show during the festival where you can get your hands on varieties of traditional dishes. Southern Flavours The special menu for the festival is curated by the chefs of Southindies capturing the essence of South Indian flavours from Karnataka, Tamil Nadu, Kerala and Andhra Pradesh. Preventing and Removing Ticks From Dogs If your dog spends a lot of time outdoors, he's at high risk of picking up ticks–those multi-legged, disease-carrying parasites that like to hide in the fur and attach themselves to the skin. Learning proper tick removal and ways of preventing ticks in the first place are crucial for stopping the spread of disease not only to your dog but to yourself and your family. Dangers of Ticks Although such a tiny insect might seem harmless at first glance, the American Kennel Club Canine Health Foundation (AKCCHF) estimates that thousands of dogs are infected each year with tick-borne diseases, such as Lyme disease, canine ehrlichiosis, canine anaplasmosis, and Rocky Mountain spotted fever, some of which are transmissible to humans. Tick bites can also become infected and cause soreness and parasitic dermatitis, especially when the tick hasn't been properly removed. Keep an eye on your dog.

6 Domestic Animals and Their Wild Ancestors The domestication of wild animals, beginning with the dog, heavily influenced human evolution. These creatures, and the protection, sustenance, clothing, and labor they supplied, were key factors that allowed our nomadic ancestors to form permanent settlements. Though to many urbanites livestock are as distant a part of reality as country music, without them, humans would never have been able to form cities at all. Take a look at the organisms that gave rise to some of our present animal companions. Gray wolf The gray wolf (Canis lupus) is thought by most scientists to have given rise to the domestic dog, a key event in the evolution of our species that may have occurred as early as 32,000 years ago and certainly by 14,000 years ago.

What’s Hot: Top 10 food trends for 2017 It’s that time again – time to savor the HOT food trends that will drive customers through your doors. We surveyed nearly 1,300 professional chefs – all members of the American Culinary Federation ‑ to find the menu items that will impact sales in the year ahead. Given a list of 169 items, from street food-inspired dishes to healthful kids’ meals, the chefs ranked each item as “Hot,” “Yesterday’s News,” or “Perennial Favorite.” Here’s our Top 10 hot trends: New cuts of meat Chefs are excited to beef up their menus with new, and often affordable, cuts like shoulder tender, oyster steak, and Vegas Strip Steak, and guests are going to lap them up with gusto!

Top 5 Food Countries in The World – World Chef Tour The great and delicious meal is favorite among everybody; nobody on earth could deny the fact that she or he doesn’t like delicious and great cuisine. The world is packed with lots of food restaurants. You can get meal anyplace because lots of people on earth are associated with the food’s business. To eat the finest and the elegant food is the aspiration of any person. However, we feel trouble to find the one that has the best cuisine. If you are away from your country, you’ll need a few hints to not get lost in the wide range of tastes and flavors. Famous Presidential Dogs in American History Some of the most famous residents of the White House have been the president's dogs. According to the Presidential Pet Museum, there have consistently been dogs in the White House from its current canine residents, Sunny and Bo Obama, dating all the way back to 1901. President William McKinley stopped the trend with a double-yellow-headed parrot, Angora kitten, and roosters–but no dogs! Here's an overview of some interesting presidential pups that lived at 1600 Pennsylvania Avenue.

How to Raise Chickens in a Brooklyn Backyard Making a frittata with eggs fresh from your backyard chicken coop is the ultimate farm-to-table experience. And raising chickens in a Brooklyn backyard is easier than you might think. Chicken coops are becoming increasingly popular for Brooklyn farmers who want to go a step further than a backyard vegetable garden. And local chicken farmers say hens (roosters are illegal in New York City) can be rewarding and relatively low-maintenance pets. What’s Hot Culinary Forecast “Local, vegetable-forward, and ethnic-inspired menu items will reign supreme on menus in the upcoming year. Guests are implementing these trends in their own lifestyles and want to see them reflected in the food they eat at restaurants. In response, chefs are creating more items in-house and turning to global flavors to infuse their menus.” - Hudson Riehle, senior vice president of research Full results of What's Hot in 2018 (pdf)► What's Hot in 2018 news release►