Motivation is Overvalued. Environment Often Matters More. Why the Place You Live Determines Your Success. Everyone knows the old line from the real estate business, “Location, location, location!” 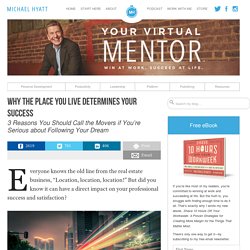 But did you know it can have a direct impact on your professional success and satisfaction? Courtesy of iStock/-aniaostudio- I’ve lived just outside Nashville for almost thirty years. It’s been a major center for the music business for decades, but Nashville is now a major hub for mediapreneurs of all stripes. Publishers, podcasters, bloggers, photographers, authors, agents, designers, marketers, musicians, filmmakers, speakers—you name it, and they’re here. There’s a new book out about the Inklings. That’s true for all of us. Ideas don’t just come out of the blue. Economist Enrico Moretti has studied this for his book, The New Geography of Jobs.

“When you are in the business of creating new products, ideas, or technologies, you need to be close to other people who are in your field,” Moretti told an interviewer. The vibe. Actors don’t go to Los Angeles for the climate, though it’s nice. How the World Around You Shapes Your Thoughts and Actions. In 1952, polio killed more children in America than any other communicable disease. 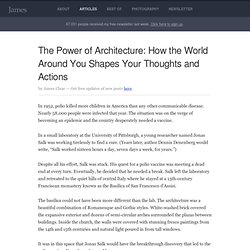 Nearly 58,000 people were infected that year. The situation was on the verge of becoming an epidemic and the country desperately needed a vaccine. In a small laboratory at the University of Pittsburgh, a young researcher named Jonas Salk was working tirelessly to find a cure. (Years later, author Dennis Denenberg would write, “Salk worked sixteen hours a day, seven days a week, for years.”) Despite all his effort, Salk was stuck. The basilica could not have been more different than the lab. It was in this space that Jonas Salk would have the breakthrough discovery that led to the polio vaccine. “The spirituality of the architecture there was so inspiring that I was able to do intuitive thinking far beyond any I had done in the past.

Today, the discovery that Salk made in that Italian monastery has impacted millions. Did inspiration just happen to strike Salk while he was at the monastery? Inhabit. Workplace Environment. Work-Life Balance. Self-Actualization. Triggers. Resistance to Change.

Novelty. Automation. Choice Architecture: How to Commit to Your Habits When You Lack Willpower. A common misconception regarding behaviour change is you can rely on motivation and willpower. But motivation isn’t sustainable in the long-term; it can ebb and flow with our mood and therefore, is unreliable. And, as we’ve learned, willpower is like a muscle: we can over-exercise it. When we do, we experience decision fatigue and return to bad habits. But what if we could bypass motivation and willpower entirely? We can, once we understand choice architecture. Enter Carolyn In their book Nudge: Improving Decisions About Health, Wealth and Happiness, authors Richard Thaler and Cass Sunstein introduce a woman named Carolyn. [1] Carolyn is a director of food services for a large city school system and was in charge of hundreds of schools, with hundreds of thousands of children eating in her cafeterias every day.

One day, after a conversation with a friend, Carolyn decided to conduct an experiment. Thaler and Sunstein commented: The Fogg Model According to B.J. See Figure 1.0: A Final Word Sources. Choice Architecture: How to Stick With Good Habits Even When Your Willpower is Gone. Most people think that building better habits or changing your actions is all about willpower or motivation. 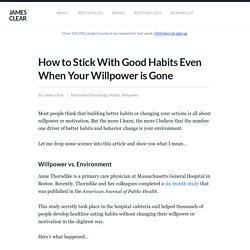 But the more I learn, the more I believe that the number one driver of better habits and behavior change is your environment. Let me drop some science into this article and show you what I mean… How to Make Your Future Habits Easy. How to Change the Habits of 107,000 People. It was 1995 and Pieter Ernst was battling a serious problem. 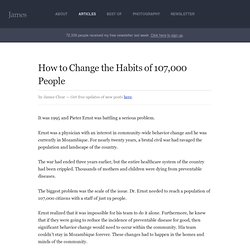 Ernst was a physician with an interest in community-wide behavior change and he was currently in Mozambique. For nearly twenty years, a brutal civil war had ravaged the population and landscape of the country. The war had ended three years earlier, but the entire healthcare system of the country had been crippled. Thousands of mothers and children were dying from preventable diseases. The biggest problem was the scale of the issue. Ernst realized that it was impossible for his team to do it alone.

Ernst came up with a plan. Changing the Habits of 107,000 People First, they found over 2,000 volunteers from the community. Then, each volunteer would visit 10 to 15 households and share what they had learned. But this was the part that made the plan brilliant: the support group for the volunteers was not the 19-person healthcare staff. What happened? How to Eat Healthy Without Thinking. Learning How to Learn. Design. Classroom Environment. Decluttering.