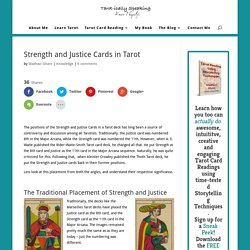 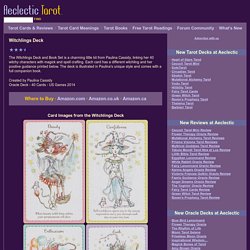 Each card has a different witchling and her positive guidance printed below. The deck is illustrated in Paulina's unique style and comes with a full companion book. Created by Paulina Cassidy Oracle Deck - 40 Cards - US Games 2014. Tarot of Pagan Cats. The Tarot of Pagan Cats sees the tarot from a cat's eye view. 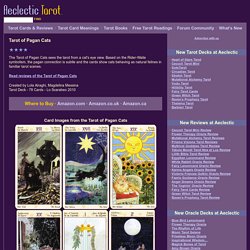 Based on the Rider-Waite symbolism, the pagan connection is subtle and the cards show cats behaving as natural felines in familiar tarot scenes. Read reviews of the Tarot of Pagan Cats Created by Lola Airaghi, Magdelina Messina Tarot Deck - 78 Cards - Lo Scarabeo 2010. Sacred Circle Tarot. Based on the Celtic Pagan perspective, the Sacred Circle Tarot uses photographs of sacred sites, as well as traditional plant and animal associations from Ancient Britain. 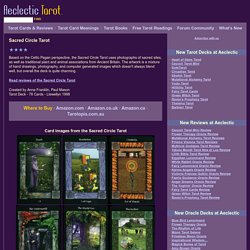 The artwork is a mixture of hand drawings, photography, and computer generated images which doesn't always blend well, but overall the deck is quite charming. Jolanda Tarot. The Jolanda Tarot is a reprint of the Swedish Witch Tarot, named after the magickal name of the creator, Jolanda den Tredjes. 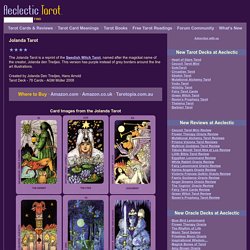 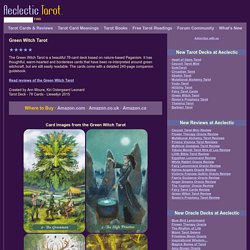 It has thoughtful, warm-hearted and borderless cards that have been re-interpreted around green witchcraft, but are still easily readable. The cards come with a detailed 240-page companion guidebook. Green Witch Tarot. Faery Wicca Tarot. Learn the tales and legends of Old Ireland in the Faery Wicca Tarot. 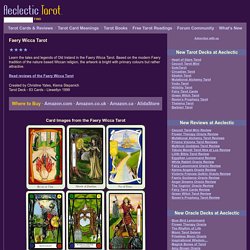 Based on the modern Faery tradition of the nature based Wiccan religion, the artwork is bright with primary colours but rather attractive. Read reviews of the Faery Wicca Tarot Created by Christine Yates, Kisma Stepanich Tarot Deck - 83 Cards - Llewellyn 1999. World eBook Library - eBooks. The Hierophant (V), in some decks named The Pope, is the fifth trump or Major Arcana card in most traditional Tarot decks. 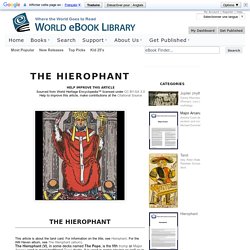 It is used in game playing as well as in divination. Description and symbolism. The Hierophant Tarot Card Meaning in Readings. The Tarot Hierophant card meaning in a nutshell:The dependency on approvalfrom an elevated dignity. 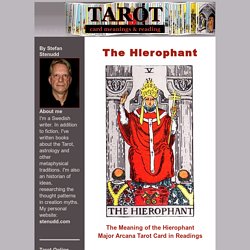 There's no doubt that the elevated figure on the Tarot Hierophant card is the pope. The word hierophant is Greek, meaning someone who shows the holy. The card is sometimes called The High Priest, which is just about the same: the one claiming to be closest to what's holy, thereby kind of holy himself, too. But that's far from certain. Baroque Bohemian Cats' Tarot third edition. 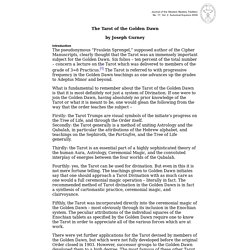 Six folios – ten percent of the total number – concern a lecture on the Tarot which was delivered to members of the grade of 3=8 Practicus.[1] The Tarot is referred to with progressive frequency in the Golden Dawn teachings as one advances up the grades to Adeptus Minor and beyond. What is fundamental to remember about the Tarot of the Golden Dawn is that it is most definitely not just a system of Divination. French Occult Tarot. Paris of the 1770s and 1780s was an epicenter of political and social change. Fueled by the ideals of the American War of Independence, France endured a violent and cataclysmic revolution that temporarily purged the country of its monarchy and its hierarchical class system.

St. Germain and Count Cagliostro gained entrée to upper class drawing rooms with alluring promises of quick wealth and eternal life. Mesmerist societies dedicated to magnetic healing popped up in towns across Europe, while intellectuals studied alchemy and joined secret societies like the Egyptian-flavored Masonic lodge founded by Cagliostro. While game players dropped the Tarot de Marseille (TdM) in favor of decorative Tarock decks, members of esoteric lodges were discovering that the TdM, with its ornate Italian suit cards and enigmatic trumps, was a book of wisdom bequeathed from the magi of ancient Egypt. BohemianCats. Baroque Bohemian Cats' Tarot by Karen Mahony and Alex Ukolov; Companion Book by Karen Mahony Review by Diane Wilkes If you would like to purchase this deck/book set, click here.

The truth is that I have never been keen on the idea of putting dogs and cats in cute little outfits. French Occult Tarot. Easy Three Card Tarot Spreads. When I first started to learn to read Tarot, I thought I needed to master the 10-Card Celtic Cross to be a good Tarot reader. But every time I used the popular Tarot spread, I felt completely confused and frustrated, unable to see the forest from the trees and not knowing what my reading was trying to tell me. Enter the three-card Tarot spread. Finally – a way to quickly and accurately answer my questions, with just three Tarot cards. Sure, there are tons of fancy (and complicated) Tarot spreads that have ten, twenty, even all seventy-eight Tarot cards in them. Tarot Mythology: The Surprising Origins of the World’s Most Misunderstood Cards. The Empress. The Hanged Man. The Chariot. The Thoth Companion: The Key to the True Symbolic Meaning of the Thoth Tarot - Michael Osiris Snuffin.

Aleister Crowley's Thoth tarot--one of the most respected yet enigmatic tarot decks of all time--offers rich rewards for those who can penetrate its complex symbolism. Written by ceremonial magician and tarot expert Michael Osiris Snuffin, The Thoth Companion is the key to understanding the true symbolic meaning of the Thoth deck. This comprehensive reference work examines all seventy-eight cards within the context of Thelema, Qabala, and ceremonial magic--the spiritual foundations upon which the deck was built. These detailed interpretations reveal valuable insights, significant correspondences, and Crowley's encoded secrets.

Once you've mastered the meaning behind this legendary deck, The Thoth Companion shows you how to use the Thoth tarot for divination, meditation, developing intuition, and pathworking. Straightforward and user-friendly, this guide also includes a glossary, bibliography, index, and an extensive appendix featuring correspondence tables. Tarot Cards vs. Regular Playing Cards. Baphomet. The Fool Tarot Card Meaning in Readings. Bohemian Cats. Tarot of Marseilles. Bohemian Cats. Tsbookshop.36-400.com. Visconti-Sforza tarot deck. World eBook Library - eBooks. "Tarot helps you meet whatever comes in the best possible way." Tarot of the Bohemians Index. Sacred Texts Tarot Tarot Reading [Gérard Encausse, (b. 1865 d. 1916)] Translated by A. P Morton Contents Start Reading Tarot of the Bohemians, along with the Pictoral Key to the Tarot, constitute the core literature of 19th and early 20th century 'Tarotism'.

His claim that the Tarot preserves ancient, profound knowledge by way of the Romany/Gypsies (i.e. Late in the book, Papus condescends to pen a section, in his words, 'for the ladies' (cue Barry White music here), which gives some basic instruction in cartomancy using the Tarot deck. --J.B. Title PagePrefaceContents. The Tarot of Marseille - Tarotlore. The Pictorial Key to the Tarot Index. Sacred Texts Tarot Tarot Reading Buy this Book at Amazon.com Contents Start Reading Text [Zipped] Although there were many Tarot decks prior to the Rider-Waite-Smith deck, and many after, none has gripped the popular imagination as much as this set. Waite covers the significance and deeper implications of each card, and gives practical instructions as to how to conduct a reading. The symbolism of the Rider-Waite-Smith deck is based on profound occult studies by Waite, and his exposition in this book of its use and meaning is unexcelled.

Title PageIntroductionThe Contents Part I: The Veil and its Symbols Section 1: Introductory And GeneralSection 2: Class I. Delving Into Tarot and Astrology in the Golden Dawn Tradition. I know very little about Tarot and Astrology, yet I do know that astrology and Tarot are inextricably linked. So imagine my joy when I met Richard Palmer, Tarot and Astrology Extraordinaire, and when he offered to write a guest post on this immense topic. Tarot Cards Meanings - TarotWikipedia. Tarot Cards Interpretation and Meaning - Tarotlore.