Numerological Significance of the Tarot 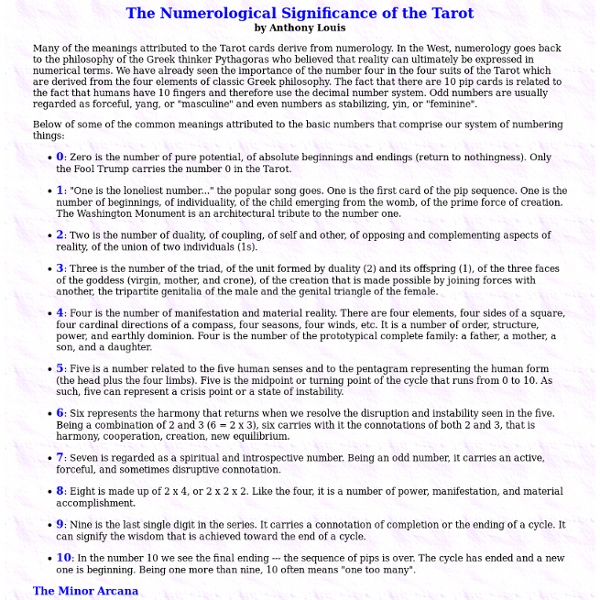 Magickal Education for Youths & Adults alike! | Grey School of W Tarot Weblog - Adam McLean 9 March 2015 I had a look at the origins for the St Patrick's Well tarot of Ertan Aktas. This well was built built at Orvieto in Italy in 1527. It was called the Pozzo di San Patrizio and was designed by Antonio da Sangallo the Younger to supply water to the city in the event of siege. The ingenious design of the well uses two spiralling staircases forming a double helix going down to the water, built in such a way that those descending with their mules or donkeys would never meet those ascending in the opposite direction. 9 March 2015 Today I received the St Patrick's Well tarot created by Turkish artist Ertan Aktas. 28 February 2015 The Korean Cultural Heritage Tarot is another deck by Choi Eunha. 27 February 2015 The Korean Misty Tarot, Majors only deck published in 2014 with an accompanying book has some excellent artwork. 26 February 2015 How on earth does anyone collect so many cat themed tarot? www.alchemywebsite.com/Tarot/art_tarot29.html 4 January 2015 Back to animals!

The Pictorial Key to the Tarot Index - StumbleUpon Sacred Texts Tarot Tarot Reading Buy this Book at Amazon.com Contents Start Reading Text [Zipped] Although there were many Tarot decks prior to the Rider-Waite-Smith deck, and many after, none has gripped the popular imagination as much as this set. Title PageIntroductionThe Contents Part I: The Veil and its Symbols Section 1: Introductory And GeneralSection 2: Class I. Part II: The Doctrine Behind the Veil Section 1: The Tarot and Secret TraditionSection 2: The Trumps Major and Inner Symbolism I. Part III: The Outer Method of the Oracles

Gnostic Teachings - Gnosis - Ancient Knowledge for a Better Life 16 Steps To Tarot Mastery After meticulously following the instructions for shuffling and placing the cards in the Celtic Cross spread, you soon realize that it's going to take years of study and practice before you can deftly handle your cards like the pros at psychic fairs. An hour later, you've looked up the meaning of each card you've laid out, your confused brain trying to put it all together for some sort of central thesis. What you come up with is this: I'm terrible at Tarot reading and will never get any better. This is where many people give up, but there's a much easier way to master the Tarot, and it doesn't involve strict rules, intensive study or memorization. Here are 16 things that you need to learn to master the art of Tarot reading. Get our horoscope newsletter There's a reason why our readers can't wait to get their daily horoscope every morning. About the author Kelly Stapleton is a freelance writer with more than six years of professional experience. More from our blog

James Ricklef's Tarot Blog Path-working on the Qabalistic Tree of Life - Alex Sumner Path-working on the Qabalistic Tree of Life by Alex Sumner Introduction "Path-working" is a comparatively new phenomenon in the Western Mystery Tradition, as it does not seem to have existed as an occult practice prior to the occult revival of the late nineteenth century. Yet nowadays it is an established practice amongst many schools of magical thought. Pat Zalewski reveals that it is part of the curriculum for a Theoricus Adeptus Minor of the Golden Dawn[1]; it is described in the writings of Dion Fortune[2], Israel Regardie[3], Melitta Denning and Osborne Phillips[4] to name but a few. Simply put, "Path-working" is the art of clairvoyantly investigating the Paths of the Tree of Life. Another technique, making use of this faculty[5], was described in a paper recording a lecture by Frater Sub Spe.[6] The idea was to re-read the rituals, and then endeavour to re-tread the Paths astrally. and Path-working and the Active Imagination ... What is meant by this "redeeming Fire"?